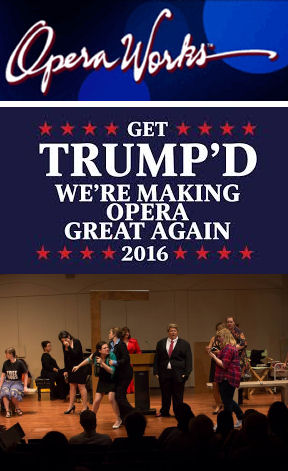 Did you hear about how Donald Trump, two Sunday’s ago, took pictures of his private parts and sent them to his gay lover while at a campaign rally? I know, I was there. Evidence, yet again, that Trump had actually sold his soul to the Devil.

(waits for a pause)

OK, it wasn’t really Donald Trump. It was Donald Trump as seen through the eyes of opera singers. Perhaps I should explain.

One of our treats every summer is attending the performance component of the Advanced Artists Program of Operaworks (FB). The Advanced Artist Program is for operatic performers in graduate school or beyond, who want to work in-depth on their repertoire – dramatically, musically, and physically. It’s goal is to teach the performers the “other” side of opera beyond singing. In particular, the not only learn how to address the business and marketing side, but they learn how to act and move on stage as actors and actresses — how to relate to other characters as characters, not just stand in front of a piano and sing. The program culminates with two performance shows of improvised opera. The show consists of three acts, not necessarily related. For each act, the students pick a location and come up with one paragraph bios of their characters and their relationship to the other characters in their act. They then pick arias, from both operas and other musical theatre, for each character to relate to another character. Improvising dialogue, they now put these characters and arias into a show. Here’s an example bio or two from this year’s program:

This year, the three locations chosen were a Subway Station in New York at 4am, an Art Museum, and a Trump Rally at said art museum. There was a connected story line. In Act I, they were getting the area ready for a Trump rally, when some Trump workers indicated they had something on the Donald. Act II focused on how the Devil was controlling the art in the art museum. Act III was the aforementioned Trump rally, where the aforementioned sexting occurred.

It is hard to relate the full details of the story, but here’s a summary of the singers, characters, and arias, in order:

Act One: An Abandoned NYC Subway Station at 4 A.M.

Act Two: An Art Museum above the Subway Station at 4 A.M.

Act Three: The Next Morning at the Art Museum

Overall, the event was very entertaining, and the singers not only performed well, but they interacted with other players well. This was especially true in the first act.

Ob. Disclaimer: I am not a trained theatre critic; I am, however, a regular theatre audience member. I’ve been attending live theatre and concerts in Los Angeles since 1972; I’ve been writing up my thoughts on theatre (and the shows I see) since 2004. I do not have theatre training (I’m a computer security specialist), but have learned a lot about theatre over my many years of attending theatre and talking to talented professionals. I pay for all my tickets unless otherwise noted. I am not compensated by anyone for doing these writeups in any way, shape, or form. I currently subscribe at Cabrillo Music Theatre (FB), the  Hollywood Pantages (FB), Actors Co-op (FB), and I plan to renew my mini-subscription at the Valley Performing Arts Center (VPAC) (FB). Past subscriptions have included  The Colony Theatre (FB) (which went dormant in 2016), and Repertory East Playhouse (“REP”) (FB) in Newhall (which entered radio silence in 2016). Through my theatre attendance I have made friends with cast, crew, and producers, but I do strive to not let those relationships color my writing (with one exception: when writing up children’s production, I focus on the positive — one gains nothing except bad karma by raking a child over the coals).  I believe in telling you about the shows I see to help you form your opinion; it is up to you to determine the weight you give my writeups.

Upcoming Shows:  August is a bit more open in terms of theatre. The first weekend just has a Jethawks game on Sunday; the second weekend has a Bar Mitzvah.  The third weekend brings another event from the wonderful counter-cultural orchestra, Muse/ique (FB) — American/Rhapsody — a celebration of George Gershwin. Late August sees us looking at shows down San Diego/Escondido for one weekend. The best of the shows available — or at least the most interesting — is Titanic from Moonlight Stages. September returns to conventional theatre. The first weekend has a HOLD for Calendar Girls at The Group Rep (FB). The second weekend may be another Muse/ique (FB) event — Summer/Time, a reimagined retelling of Porgy and Bess. The third weekend has a HOLD for Ma Rainey’s Black Bottom at the Mark Taper Forum (FB). The last weekend is The Hunchback of Notre Dame at The La Mirada Theatre for the Performing Arts (FB).

Continuing the look ahead: October is a bit more booked. The first weekend brings Dear World at the Valley Performing Arts Center (VPAC) (FB) and Our Town at Actors Co-op (FB), as well as the start of the High Holy Days. The second weekend has another Valley Performing Arts Center (VPAC) (FB) event: this time for Jazz at Lincoln Center Orchestra with Wynton Marsalis. The third weekend has yet another VPAC event: An Evening with Kelli O’Hara on Friday, as well as tickets for Evita at Cabrillo Music Theatre (FB) on Saturday. The following weekend brings Turn of the Screw at Actors Co-op (FB) on October 22 and the new Tumbleweed Festival (FB) on October 23. The last weekend of October brings Linden Waddell’s Hello Again, The Songs of Allen Sherman at Temple Ahavat Shalom (a joint fundraiser for MoTAS and Sisterhood). Oh, and if that wasn’t enough, October is also the North Hollywood Fringe Festival (FB), and it looks like a theatre in Pasadena will be presenting the musical Funny Girl. November is still in the planning stages, but we know it will include Hedwig and the Angry Inch at  the Hollywood Pantages (FB); a Day Out With Thomas at Orange Empire Railway Museum (FB) [excuse me, “Southern California Railway Museum”]; the Nottingham Festival (FB); and possibly Little Women at the Chance Theatre (FB) in Anaheim. As always, I’m keeping my eyes open for interesting productions mentioned on sites such as Bitter-Lemons, and Musicals in LA, as well as productions I see on Goldstar, LA Stage Tix, Plays411 or that are sent to me by publicists or the venues themselves.