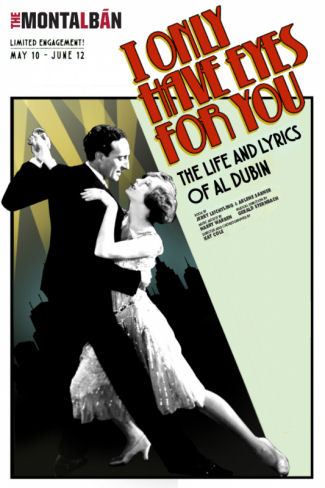 Many years ago, a friend of mine noted that the phrase “I Only Have Eyes for You” could accommodate putting the word “only” between (or before or after) any word in the phrase, creating subtle differences in meaning.

I’ll wait while you try it out. After all, I have only eyes for you.

I mention this because yesterday afternoon we were at The Montalban Theatre (FB) (nee the Doolittle, nee the Huntington Hartford) to see the musical “I Only Have Eyes for You: The Life and Lyrics of Al Dubin“, with book by Jerry Leichtling (FB) and Arlene Sarner (FB), music mostly by Harry Warren, and lyrics by Al Dubin. The musical was well executed, presented loads of talent, and marvelous singing and dancing. However the story was…. creaky. It is clear that the emphasis was placed on the music and the singing and dancing, not on the story and its presentation. Those familiar with musicals will tell you that great music and great dancing can get you far, but what makes a musical succeed in the long term is telling a good story, and leaving the audience with some form of feeling.

In between all the songs from the wonderful Al Dubin song catalog (yes, this was a jukebox musical), the production attempts to tell the life story of the songwriter, Al Dubin. Arguably, the choice of doing that particular story creates the risk of the Mack and Mabel curse: how do you tell a story when the ending is a downer? Mack and Mabel had that problem because the two people you wanted to see together end up apart, with Mabel Normand dying of health problems at the age of 37. Try and feel good after that. In this story, nor matter how you cut it, you end up with Al Dubin entering a spiral down of drugs and alcohol, and dying on the street after having taken a large quantity of doctor-prescribed barbiturates.

Take the downer of a story, and add to it the creakiness of a traditional 1930s musical that tries to be upbeat over everything, and you have…. 42nd Street (which will open at the Pantages down the street tomorrow). More importantly, however, you have a musical that is out of date with the times. In contrast to old musicals that were designed to keep smiling through the pain, to keep dancing, to stay upbeat, new musicals are designed to tell real stories and relate to real life. The pains and foibles remain in the story. The tone and superficiality date the book of I Only Have Eyes for You. That, more than anything, is why I characterized the story as creaky.

I should also note that it is unclear the extent to which the story presented it truthful. Specifically, the book posits a World War I experience as driving Dubin’s spiral down. Yet a web search shows no such incident in Dubin’s life; in fact, the timing of some of the elements of the story as presented do not agree with the real story. Taking artistic license with the facts does happen, but usually it is acknowledged as such.

Lastly, this is a jukebox musical. That means you have to take songs not intended to tell a story, and somehow shoehorn them into to a story context. Sometimes it works; usually it doesn’t. For this show, that means that the songs that are performed as part of the historical context work well; the ones that attempt to propel the story often fall a little flat, primarily because Dubin tended not to be autobiographical in his tunes. Tin Pan Alley tunesmiths rarely were.

This doesn’t mean the show is bad. The performances and the music outshine the weak book. This is a show that might play well on the road, especially to the older theatre audience familiar with the music. The creaky book would limit the life of the show on Broadway; but with a two-week run, this could be spectacular.

The cast for this show, under the direction and choreography of Kay Cole, was uniformly excellent. In the lead positions were Jared Gertner (FB)  as Al Dubin and Nikki Bohne (FB) as Helen McClay Dubin.  Gertner exuded an easy-going charm as Dubin — you could see how his playfulness and creativity were there to take him far. The problem was that his personality was perhaps too bright and bubbly; his darker side and demons didn’t come across as dark as they needed to be to take him in the direction that he went. This might have been sanitization for the sake of story; it might have been direction that wanted to keep things up. Whichever it was, although Gertner clearly tried, the downside was more of a Foster Brooks downside than a deep depression. Gertner’s singing and dancing were uniformly excellent and just a delight to watch. I liked his rendition of “Boulevard of Broken Dreams”; for some reason, I thought that was a Jacques Brel song. Bohne’s Helen played off of Gertner’s Al quite well. She was perky, bubbly, and playful. You could easily see that Ms. Bohne was enjoying this role tremendously. She had a truly wonderful singing voice, demonstrated in…. well, everyone of her songs.  She was also a strong dancer.

In the second tier of characters, we have Kayla Parker (FB)’s Ruby Keeler and Constantine Rousouli (FB)’s Harry Warren. Parker’s Keeler was great — a singing and dancing powerhouse. Just a delight to watch in numbers like “A Cup of Coffee” or “You’re Getting to be a Habit with Me”. Rousouli’s Warren was a bit stiffer, but still strong. He had a voice that was surprisingly deep, as shown in “Don’t Give Up The Ship”.

Lastly, let’s look at the remaining production and creatives. I noted earlier that not only did Kay Cole direct, but she choreographed as well. Cole’s dancing seemed very much in the period, with loads of tap and lots and lots of style. It was very fun to watch. Jeffrey Scott Parsons (FB) was the dance captain. Hector Guerrero was the Assistant Choreographer.

John Iacovelli (FB)’s scenic design was somewhat traditional: lots of pieces that flew down or were stagehanded in. They did a great job in establishing the requisite sense of place; I particularly liked the drop for LA Union Station, which was very accurate. The sets were supported by Brandon Baruch (FB)’s lighting design, which served to focus the view, establish the sense of time, while ensuring what should be seen should be seen. Also supporting the sense of time and place were Debra McGuire‘s costumes, Marissa Bergman (FB)’s properties, and Judi Lewin (FB)’s hair, wig, and makeup design. My wife and I had a few quibbles with McGuire’s costumes: there were there aforementioned stretch pants/leotards that the male ensemble members wore, and which left little to the imagination; the odd blue top that the character of Ruby wore in the second acts that seemed more in the 80s; Carmen Miranda’s costume, which likely wouldn’t have shown her belly button in that era; and some blue costumes that got lost against a blue background. Other than that, the costumes were good. The props were effective, although I noticed at times they were a bit flat (such as the musician’s instruments). Hair, wigs, and makeup all seemed reasonable. The sound was by the ever reliable Cricket S. Myers (FB) — one really doesn’t need to say anything — her presence ensures a good sounding show. Rounding out the production credits in positions significant to the actors, but not obvious to the audience members: Michael Donovan C.S.A. (FB) [Casting]; Davidson & Choy Publicity (FB) and Chasen & Company [Publicity]; Allied Integrated Marketing & 87AM (FB) [Marketing]; Matthew Herrmann (FB) [General Manager]; Brad Enlow [Technical Supervisor]; Art Brickman (FB) [Production Stage Manager]; Tara Sitser (FB) [Stage Manager]’ Phil Gold [Assistant Stage Manager]; A Chandler Warren Esq [Legal]; and Corky Hale [Producer].

“I Only Have Eyes for You” continues at The Montalban Theatre (FB) through June 12. Tickets are available online. Discount tickets may be available through Goldstar.

Upcoming Shows: Ah, June. Wonderful June. June is the Hollywood Fringe Festival (FB), and I’ve already written about the shows I plan to see, as well as suggestions to the Fringe regarding viewing the audience as a customer. Our Fringe/June schedule is as follows: