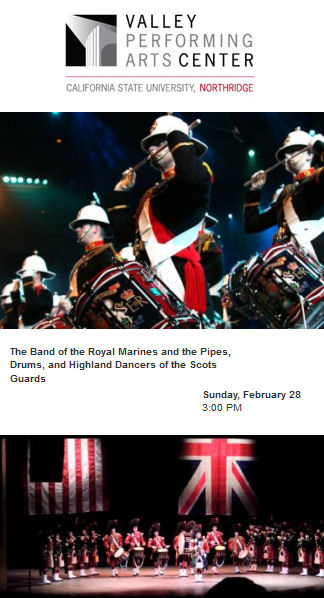 I know it is a few days late, but I did want to do a quick writeup of the show we saw Sunday afternoon at the Valley Performing Arts Center (VPAC) (FB): The Band of the Royal Marines and the Pipes, Drums, and Highland Dancers of the Scots Guards.

This is a hard show to write up — there were no real production credits; you don’t get the names of the performers — all you get is the history. That’s on the page I linked above.

The program (from the program we were handed out) included:

The performance itself was spectacular. I particularly enjoyed the vocalist during “Over the Hills and Far Away”, and the individual performances. Other than that, it was hard to separate performance — I just sat back and enjoyed the music.

Short summary: much much better than our previous VPAC outing.

Ob. Disclaimer: I am not a trained theatre critic; I am, however, a regular theatre audience member. I’ve been attending live theatre and concerts in Los Angeles since 1972; I’ve been writing up my thoughts on theatre (and the shows I see) since 2004. I do not have theatre training (I’m a computer security specialist), but have learned a lot about theatre over my many years of attending theatre and talking to talented professionals. I pay for all my tickets unless otherwise noted. I am not compensated by anyone for doing these writeups in any way, shape, or form. I subscribe at three theatres:  The Colony Theatre (FB), Cabrillo Music Theatre (FB), and I just added the  Hollywood Pantages (FB). In 2015, my intimate theatre subscription was at REP East (FB), although they are reorganizing and (per the birdies) will not start 2016 shows until August. Additionally, the Colony just announced that the remainder of their season has been cancelled, so the status of that subscription is up in the air. Through my theatre attendance I have made friends with cast, crew, and producers, but I do strive to not let those relationships color my writing (with one exception: when writing up children’s production, I focus on the positive — one gains nothing except bad karma by raking a child over the coals).  I believe in telling you about the shows I see to help you form your opinion; it is up to you to determine the weight you give my writeups.

Upcoming Shows: March starts with “Man Covets Bird” at the 24th Street Theatre (FB) on March 6 (the day after the MRJ Man of the Year dinner). The second weekend of March recently opened up, due to the cancellation of “Another Roll of the Dice” at The Colony Theatre (FB). We’ve replaced “Dice” with another musical: “All Shook Up” at the Morgan-Wixson (FB) in Santa Monica.  [This also permits me to get more music for my iPod Classic (now at 512GB) by visiting Record Surplus)] The third weekend of March takes us back to the Pasadena Playhouse (FB) on March 19 to see Harvey Fierstein’s Casa Valentina, followed by Bach at Leipzig at The Group Rep (FB) on March 20.  The last weekend of March brings “A Gentleman’s Guide to Love and Murder” at the Ahmanson Theatre (FB).  April will start with Lea Salonga at the Valley Performing Arts Center (VPAC) (FB) on April 1 and an Elaine Boosler concert at Temple Ahavat Shalom on April 2 (this concert is open to the community; get your tickets here). April will also bring the Turtle Quintet at the Valley Performing Arts Center (VPAC) (FB), “Children of Eden” at Cabrillo Music Theatre (FB) , and our annual visit to the Renaissance Faire (Southern). April may also bring A Shred of Evidence at Theatre 40 (FB). As always, I’m keeping my eyes open for interesting productions mentioned on sites such as Bitter-Lemons, and Musicals in LA, as well as productions I see on Goldstar, LA Stage Tix, Plays411 or that are sent to me by publicists or the venues themselves.