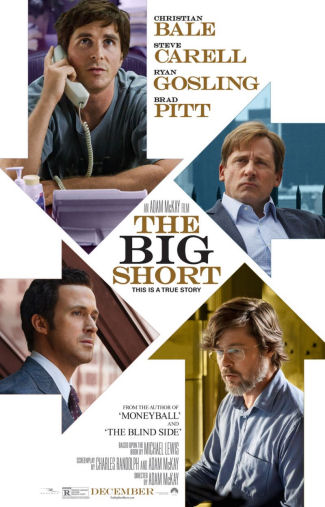 If you haven’t figured it out by now, I normally go to live theater, even though I live in the movie capital of the world. But that’s not meant to imply I never go to the movies, and one of the few days that I reliably opt to watch a projected image is on Christmas Day, where tradition — if not the Talmud — demands that I see a movie and eat Chinese food.

When I do see a movie, I like to ask myself whether this is a cinematic story. For example, take Star Wars (which I plan to see in the upcoming week). That’s something that clearly must be a movie: it cannot be told in its form effectively on the live stage, and even with the growth in screen sizes, it requires that shared experience and large screen. I also find myself observing those things that make film different from stage: the cinematography, the emphasis on movement and visual storytelling (as an example of this,  I was listening to The Producers Perspective podcast episode with Stephen Schwartz, where he noted that whereas people can just stand in one place and sing on stage, on film all songs require motion — be it motion of the singer or of the camera). I truly like my movies to be something that requires the movie treatment — something that gains from the big screen, the audience, and the shared experience.

I’ll note that I’m likely unique in this view — witness the popular success of movies that are then adaptable and adapted for the stage, and the number of stage shows that get adapted for the cinema. However, I think there is something special from the stage, where the actors and the audience can create a feedback system that amplifies the energy. I’ll note that you can go see live theatre for what it costs to see a movie — that’s certainly true for yesterday’s show, where tickets were up to $12.50 and a large popcorn to $8.75. Learn about Goldstar.Com, and the ability to get half-price tickets, and you’ll never look back.

Independent of my love of theater, yesterday was Christmas. Christmas tradition demands a movie, not live theater. Looking at the selection in the theaters (and wanting to put off the crush around Star Wars), we settled on The Big Short, a comedy about the financial meltdown, directed by Adam McKay (FB), and starring Christian Bale (FB), Steve Carell (FB), Ryan Gosling (FB), Brad Pitt (FB), Hamish Linklater (FB), and many others. Why? The buzz on the movie had been good, and I was growing to be more impressed with McKay’s work from his new podcast on Gimlet, Surprisingly Awesome. McKay does that podcast with Adam Davidson (FB), who he made when Davidson consulted on The Big Short. Davidson was brought in as a consultant because of his experience as co-founder of Planet Money, an excellent podcast from NPR that figures out how to explain complex financial things in an understandable way.  In their new podcast, the two team up to, through entertaining explanation, change things that seem dull into something interested. Basically, their new podcast is the Planet Money approach applied to something broader than economics.

But The Big Short was about economics. In particular, it was about the environment leading up to the financial meltdown in 2008 — a meltdown that helped provide the final push to put the Obama administration into office. I already had a good understanding of this meltdown thanks to Toxie, the Toxic Asset bought by the Planet Money team to explain the financial meltdown (later the subject of a This American Life episode). Toxie was a tool to get to the podcast/radio audience: by looking into what it took to buy one of the toxic bonds (collateral debt obligations), PM could look at the mortgages in the bonds, how those bonds were constructed, and how their game brought down the housing market. But short of an animated movie, Toxie would not work well on the screen.

Enter Michael Lewis (FB). Lewis wrote a book on the financial crisis called The Big Short. This book provided a character-driven true story about the crisis, starting in the feeder markets: the bond and real estate derivative markets where new types of securities are invented to maximize profits irrespective of the costs to society. In a manner similar to the play Enron, the story illustrates how greed overcame common sense; how a desire to Make More Money created blinders to where the system was failing — or, more properly, being propped up with supports made of paper. Character driven stories. This is something that works well on the screen.

Enter McCoy and Charles Randolph. They worked with Lewis, and consultants such as Davidson, to adapt this to the screen. The result, at least to my eyes, was a Planet Money episode writ large: a two-hour retelling of the rise and fall of the housing market told in such a way as to make the story interesting. This included translating what were apparently footnotes in the book providing exposition of complex terms into asides by unrelated actors explaining complex terms in understandable ways (for example, Richard Thaler and Selena Gomez explaining collateralized debt obligations). This struck me as very Planet Money way of telling the story. There were also points in the story where the character doing the narration turned and spoke to the audience. But that’s also very Planet Money-like.

The end product had the feel of a documentary. Other than the asides and recognizing one actor (Linklater — yes, I didn’t recognize Brad Pitt), it did not feel like a reenactment. It felt like it was a narrated version of real life. I guess that is a testament to the direction and the quality of the actors that they were believable.

So, let’s go back to my original questions. Why is this a movie? Does it deserve to be on the big screen?

Second, could this have been told on stage? I don’t think so. It wasn’t super-dependent on special effects, but the manner of the story construction didn’t fit with the linear deep story of the stage. There were too many places, too many asides, and the nature of the character story just wouldn’t work.

Third, did it need the big screen? Here’s where I think the movie did fail. The story didn’t require the big screen to tell the story in the manner of a Star Wars or Harry Potter. It would work just fine on a smaller screen. However, I think it did benefit from the audience — in that shared pain is lessened. Watching this alone at home could be very painful, especially for those sucked into it. Watching it in the theater shares the pain.

What I don’t know is the impact of the pain. The movie makes clear that the financial meltdown occurred because of a greed for more and more money. It showed how that administration of the time — the Republican administration of George Bush — likely knew the problem but didn’t want to suffer the popularity loss that would stem by slowing the economic growth. They were lax on regulation and let banks proceed unchecked in their excesses. When things failed, they bailed out their buddies. As this movie comes out, we’re entering into the election year of 2016. Is this movie bad news for the Republican candidates — emphasizing their desire to make money at the expense of the lower economic classes? What might be the impact of this on Trump, whose name is synonymous with money and privilege? Or will the people, in the words of 1776, be more interested in protecting the possibility that they might be rich to avoid the reality of facing the fact that they are poor?

Overall, I walked out liking this movie a great bit. It changed something that was very complex into something understandable. It had remarkable performance — remarkable in their realism. Will this movie win “gold” at the Oscars because of it? That I can’t answer — it might have too much of a documentary feel for Academy Voters to see the performances as performances. It certainly isn’t the classic dramatic story that seems to win, but it also isn’t the popcorn-checking action adventure.

Whatever the gold status, I think it is worth seeing.

Upcoming Shows: There may be one more movie in December: Star Wars VII, sometime during the week. In terms of theatre, this last weekend of December has “The Bridges of Madison County” at the Ahmanson Theatre (FB), and Nunsense at Crown City Theatre (FB). The new year, 2016, starts with “Louis and Keeley – Live at the Sahara” at The Geffen Playhouse (FB) on January 2nd. This is followed by “Bullets Over Broadway” at the Pantages (FB) on January 9; “That Lovin’ Feelin’” at The Group Rep (FB) on January 16; “Stomp” at the Valley Performing Arts Center (VPAC) (FB)  on January 24; and “A Funny Thing Happened on the Way to the Forum” at Cabrillo Music Theatre (FB) on January 30. There is also the open question of whether there will be Repertory East Playhouse (“the REP”) (FB) 2016 season, and when it will start.  However, given there has been no announcement, I feel safe booking all weekends in January  (I’ll note that if there is no REP season, I’ll likely subscribe at Group Rep — call it the Law of Conservation of REP). There is currently nothing on the schedule for February, except for February 28, when we are seeing The Band of the Royal Marines and the Pipes, Drums, and Highland Dancers of the Scots Guards at the Valley Performing Arts Center (VPAC) (FB). March brings “Another Roll of the Dice” at The Colony Theatre (FB), and has two potential dates on hold for “A Gentleman’s Guide to Love and Murder” at the Ahmanson Theatre (FB) (pending Hottix). I expect to be filling out February as December goes on.  As always, I’m keeping my eyes open for interesting productions mentioned on sites such as Bitter-Lemons, and Musicals in LA, as well as productions I see on Goldstar, LA Stage Tix, Plays411 or that are sent to me by publicists or the venues themselves.