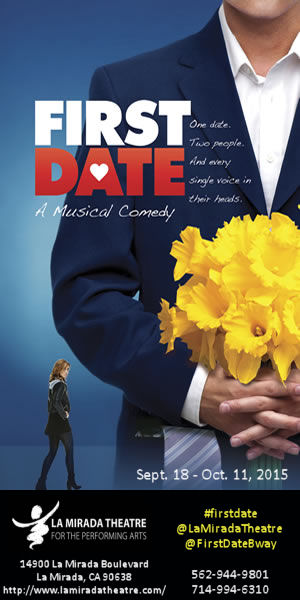 Recently, I’ve been listening to a lot of podcasts on theatre. One of these, the excellent Producers Perspective podcast, has been focusing on the musical Spring Awakening, and its transfer back to Broadway. The composer and lyricist both said the same thing about the music and lyrics: their goal was not to move the story forward through the music and lyrics, but to use the music and lyrics to illuminate the inner thoughts and turmoil of the characters — to get inside the head. Such a use of music requires much less suspension of disbelief. This approach to music and lyrics was evident last night in the musical we saw last night at  The La Mirada Theatre for the Performing Arts (FB) — “First Date”, with book by Austin Winsberg (FB) and music and lyrics by Alan Zachary and Michael Weiner (FB).

I first became aware of the musical First Date when Amazon recommended the cast album. I picked it up shortly after it came out (in February 2014), and found that I liked the music. The story sounded interesting, and so when I learned that La Mirada was doing the first Southern California production of the show, I set the tickler on Goldstar to let me know when tickets were available. We blocked off a date, picked up tickets, and braved the traffic (is the traffic between the San Fernando Valley and La Mirada ever clear on a Saturday afternoon?) . I’m glad we did.

First Date ostensibly tells the story of Aaron and Casey. It is Aaron’s first blind date, and one of far too many for Casey. They meet at some fancy New York bar and restaurant, because (of course) New York has the only interesting dating scene. The one-act, no-intermission show is the story of that date, and most of the songs are visualizations of inner dialogues occurring in the head of either Aaron or Casey. In fact, only about three songs are performed by actual characters in the real world. You can find a fuller synopsis on the Wikipedia page.

The songs themselves are reasonably cute and funny. From listening to the CD, I was aware ahead of time of “The Girl for You”, and I found it equally funny on the stage — although the Jewish stereotypes were a bit too heavy-handed for me (but then again, this is on the border of Orange County, so they might not recognize Jews without the stereotypes, but then again, Temple Beth Ohr is just up the street). All three “Bailout” songs were cute and well executed. I was particularly taken with the song “Forever Online” (which, alas, is not on the original cast album and does not appear to have been recorded separately). This song tells the perils of dating in a world of Google, where everything you’ve ever said or posted online lives forever to embarrass you — it makes a great (and humorous) warning songs. Also cute was the song “In Love With You”, where Aaron confronts some issues from his past (I’d say more, but it would destroy the surprise of that song).

Although the music and story is good, there are a few weaker points. The interlude of the Waiter’s song was (to me) a bit pointless and left you wondering why it was there: it wasn’t from a principal character, and it wasn’t illuminating the background of why the characters were what they were. I would have preferred another song of illumination instead.

But on the whole, the show was funny and well executed. The direction of Nick Degruccio (FB) worked well, making the characters reasonably believable, and handling the various costume and character changes of the ensemble well. The shouldn’t come as a surprise: the presence of Mr. Degruccio as the director of a musical pretty much guarantees you’re going to be seeing something of high quality.

In the lead positions as the couple on the date were Marc Ginsburg (FB) as Aaron, and Erica Lustig (FB)  as Casey. Both were new to us; we haven’t had the opportunity to see them before on Southern California stages (although they’ve done some shows). They both came across as cute, and they had believable chemistry together — a good thing for a first date :-). Both had strong voices and used them well — particularlyMarc in “In Love with You” and Erica in “Safer”.

The remainder of the cast played multiple characters as well as background restaurant patrons. Alas, the song credits only provide the character at the time, whereas the cast credits are the generic ensemble names, so it is difficult to map performers to songs.  Combining information from the Broadway World Photo Coverage and cast allocations from Broadway gives: Justin Michael Wilcox (FB) [Man #1: Gabe/Edgy British Guy/Gilberto]; Leigh Wakeford (FB) [Man #2: Reggie/Aaron’s Future Son/Edgy Rocker Guy]; Scott Dreier (FB) [Man #3: Waiter/Casey’s Father/Blaze/Friendly Therapist]; Stacey Oristano (FB) [Woman #1: Grandma Ida/Lauren/Aaron’s Mother]; Kelley Dorney (FB) [Woman #2: Allison/Google Girl/Reggie’s Mom]. Now that we have the mapping, I can note some particular highlights: Dorney was particularly strong as Allison (especially on the performance and reaction side) and as the Google Girl in “Forever Online”. Wilcox was fun in his characterization of Gabe, the friend of Aaron, particularly in Allison’s Theme and his reactions in “In Love With You”. Wakeford was funny as Reggie in the various Bailout songs and in the final scenes — it was a character my wife particularly enjoyed. Dreier was funny performance-wise as the waiter; although I wasn’t particularly crazy about “I’d Order Love”, he performed it well. Lastly, Oristano had a great characterization as Casey’s sister Lauren.

The choreography by Lee Martino (FB) worked well given the stage and the set; Leigh Wakeford (FB) served as dance captain. The show was under the musical direction of Brent Crayon (FB), and featured orchestrations by August Eriksmoen (FB) and vocal and incidental music arrangements by Dominick Amendum (FB). Brent Crayon (FB) also served as conductor and keyboard 1 for the First Date Band; additional members of the band were: Mike Abraham (FB) [Guitar 1]; John Ballinger (FB) [Guitar 2 / Keyboard 2]; Sean Franz (FB) [Reeds / Keyboard 3]; Jonathan Ahrens [Bass]; and Eric Heinly (FB) [Drums]. In general, the music was played well and sounded great. However, for the first few scenes, the music sounded a bit muffled and overpowered the lyrics. This was corrected as time went on, so it was more of a sound issue.

On the technical side, the scenic design by Stephen Gifford (FB) was a modernist restaurant that was reasonably realistic; a greater sense of the scenes and place came from the properties design of Terry Hanrahan (FB). The costume design of Thomas G. Marquez (FB) worked very well, especially considering the last minute changes that had to occur onstage. The lighting by Steven Young (FB) worked well; in particular I noted the use of the lighting during the “Bad Boys” song. The sound design by Josh Bessom (FB) was initially a little off — the vocals were a bit muffled and the orchestra overpowering, but that was adjusted 2-3 songs in  and was great for the rest of the show. Remaining technical credits: Katie McCoy (FB) [Hair Design]; Julia Flores (FB) [Casting]; Buck Mason (FB) [General Manager]; David Cruise (FB) [Technical Director]; David Elzer/Demand PR (FB) [Publicity]; Amy Ramsdell (FB) [Assistant Stage Manager]; Jill Gold (FB) [Production Stage Manager]. “First Date” was produced by The La Mirada Theatre for the Performing Arts (FB) and McCoy Rigby Entertainment (FB).

P.S. to the person sitting two seats to the left of me: When they say turn off your cell phones, that means “turn it off and put it away”. The light from your phone is not only distracting to the actors, it is distracting to the audience — especially when you periodically hold it up to (I guess) take a picture or record (which I’m sure you’re not doing, as it usually isn’t permitted). I didn’t like having to remind you to put it away.

Upcoming Shows: October was being held for the NoHo Fringe Festival (FB), but they haven’t announced the Fringe shows yet, so I’ve started booking weekends. The first weekend of October brings “The Baker’s Wife” at Actors Co-op (FB) in Hollywood. The second weekend of October brings “The Best of Enemies” at The Colony Theatre (FB). The third weekend of October takes us to Thousand Oaks for “Damn Yankees” at Cabrillo Music Theatre (FB). The fourth weekend of October brings “Uncle Vanya” at Antaeus Theatre Company (FB) in North Hollywood. Halloween weekend sees me at CSUN for Urinetown, and then both of us out in Simi Valley for “The Addams Family” at the Simi Cultural Arts Center (Simi Actors Rep Theatre (FB)). The following weekend sees us back in Simi for the Nottingham Festival (FB) on November 7. We then go out to Perris for “A Day Out with Thomas” at Orange Empire Railway Museum (FB) on November 11 (I can’t skip seeing my buddy Thomas and his friend Percy). The bookings for November conclude with Deathtrap at REP East (FB) on November 14; the rest of the month is currently open. December brings “Humble Boy” at The Colony Theatre (FB) the first weekend, followed by a mid-week stint as a producer, when we present The Nigerian Spam Scam Scam as the dinner entertainment at the Annual Computer Security Applications Conference (ACSAC). December also has dates held for “The Bridges of Madison County” at the Ahmanson Theatre (FB) and “If/Then” at the Pantages (FB). There are also a few other interesting productions I’m keeping my eyes open for. The first is the Fall show at The Blank Theatre (FB), “Something Truly Monstrous”, sounds wonderful — however, it runs through November 8, so squeezing it in would mean a double weekend. The show at the Kirk Douglas Theatre (FB) also sounds like an interesting exploration of clutter —  but “The Object Lesson” only runs through October 4, and I’m not sure we can squeeze it in. As always, I’m keeping my eyes open for interesting productions mentioned on sites such as Bitter-Lemons, and Musicals in LA, as well as productions I see on Goldstar, LA Stage Tix, Plays411.