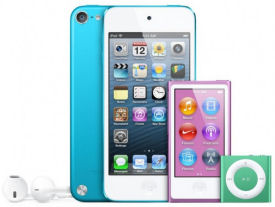 This week, Apple finally announced a refresh to the remaining members of the iPod line. The new refresh brings a faster processor, updated display, and multiple sizes. Commentators are going on and on about its benefits, and the major drawback discussed deals with its place in the new Apple streaming ecosystem.

Mind you, I seriously would have thought about getting one of these beasts had Apple deigned to increase the memory to 256GB, or at least made the memory a micro-SD card that was capable of taking the largest micro-SD card currently made (2TB).  But 128GB? That’s less memory than my current iPod Classic at 160GB (148.79GB capacity for music). I’d have to delete music just to fit on a 128GB memory. As it is, I’ve only got around 13GB free on my iPod Classic, and that will be going down in a week or so (Amazon order going in on Monday).

Folks, we’re seeing industry trying to push us back to the future. They’ve successfully convinced people that you can do everything in the cloud — computing, storage, etc. Us old timers realize that’s just a move back to time-sharing on a central computer — the way computing was done in the 1970s. Apple and the rest of the music industry is attempting to convince us that we don’t need to own our music, we can listen to whatever we want by streaming; in fact, if we don’t want to pick what we listen to, they’ll do it for us. Us old timers realize that’s just pushing us back to the AM/FM model, where you would hear DJs programming a playlist of tracks out of a station’s vast library. Any music you had wasn’t portable. That’s the model of music we had until cassettes hit the market in the 1970s.

I’m sorry, but I like to have my own computing power that I control. I like to own my music, and I love the freedom to listen to whatever I want, whenever I want, and most importantly, whereever I want without worry for data usage or streaming capabilities. I want a dedicated music player so that it does not consume my phone’s battery, and that tries to do one thing right instead of many things wrong. Most importantly, I want a dedicated music player that has room for all the music I currently own AND all the music I will purchase in my lifetime. Most players cannot handle that. [Oh, and it would be a plus if it worked with the iTunes ecosystem so that I could preserve my play counts and all my smart playlists.]

Currently, there are NO music players currently sold that do this. Sorry, updated iPods, but 128GB doesn’t cut it. I’m sticking with my 160GB iPod and its twin.

Still, with only 13GB left, I keep exploring replacements. Here are the likely contenders:

None of these have good software for the computer side of the management interface. However, I’ve done some searching, and it looks like MusicBee is a great alternative (at least if you’re on Windows, as I am).  I’ve read a number of reviews and writeups (Lifehacker, GHacks, Softpedia, Wikipedia), and it looks like it can import from iTunes, build smart playlists, and synchronize to DAP (digital audio player) devices.

I looked at the Cowon X9, but it seems to only take a 64GB memory card, and have a maximum file limit of 12,000 songs — I have triple that. The Sansa Clip+ is also recommended, but doesn’t appear to have sufficient capacity, even when Rockboxed.

My conclusion at this point is… wait, and if I get closer to filling the iPod Classic, move more of the less popular music off the iPod (or only sync playlists). Moving it off does lose playcounts and ratings — I’ve done that for some music already that I hadn’t liked at all, or stand-up comedy I rarely listen to or do not plan to listen to any more (Bill Cosby, I’m looking at you. Thump. Thump.)

I really wish Apple would wise up, and come up with a 256GB iPod Touch. It’s not that I want the touch screen — I want the larger storage in the iTunes ecosystem. Hell, come up with an iPod Touch that takes a microSD card. But I fear Apple will never do this; large capacity devices go against their current market, which is streaming, not stored, music.

2 Replies to “Space, The Final Frontier”