It’s season announcement time, and I’ve gotten a few more in the mail. What am I interested in and what will I attend? What should you consider? Read on, McDuff!

This is the company that was formerly known as Cabrillo Music Theatre. They operate out of a large regional theatre in Thousand Oaks, doing locally-cast musicals with a mix of Equity performers, non-Equity professionals, and up and coming artists. They have announced three shows for the 2018-2019 season (currently remaining in the 2017-0218 season are The Hunchback of Notre Dame (April 20-29) and Beauty and the Beast (July 20-29)):

We should be renewing our subscription when the packet arrives.

I recently received the announcement of Theatreworks next season. Theatreworks is in the San Jose/Palo Alto area, about 300 miles away, but for the right show I might drive up, plus I have friends who live in that area. Here is their next season:

An excellent season. If I lived in Northern California, I’d subscribe both to TheatreWorks and to Tabard, whose season I already mentioned in my review of A Walk in the Woods:

Looking at the TheatreWorks season, I’m really interested in Tuck Everlasting. This failed on Broadway, so it is unlikely that Los Angeles will see a tour. This means I’m dependent on a theatre company down here to do it, which isn’t that likely given our companies (I could see Chance giving it a try, or MTW. But anyone else? It might be a while). Yet I loved the music and the premise of the show. That might make it worth the drive for either Thanksgiving weekend or after the ACSAC conference.

We are happy to announce that our 2018 Hollywood Fringe Festival production will be the one-act musical, The Story of My Life! We are also excited to announce we will be performing at the The Hobgoblin Playhouse. We are excited to bring this story to you…coming in June! Click on the link below to find out more!

And for those of you who don’t know, if you purchase your season subscription before our current production ends, you will get free tickets to see this production!

We last saw Story of My Life back in 2009, right after the death of our dear friend Lauren. The story touched me in special ways; it is just a beautiful and meaningful show. Here’s one verse from a song in the show:

“You’re a butterfly my friend,
Powerful and strong
And I’m grateful for the way
You’ve always hurried me along.
When you flap your wings to stretch yourself
It might seem small to you
But you change the world
With everything you do.”

I’m really, really, excited for this show. We’re season subscribers. You should subscribe as well: $60 for Dessa Rose, Jane Eyre The Musical, and Sondheim’s Passion, as well as the Fringe show. Support a wonderful small theatre.

Lastly, an update on the Ahmanson. They’ve been announcing their season in pieces, with the first chunk here, with an additional show I discussed with the Pantages season. There are two shows left to announce, and when I asked, CTG replied:

Hi Daniel! We will announce our entire Ahmanson season within the next two weeks. Stay tuned for updates! 👍

So, in two weeks, I hopefully should be able to make the final subscription (and see if I got my predictions right).

This morning, the  Hollywood Pantages (FB) announced their 2018/2019 season. My predictions were pretty damn close. Here’s what I was predicting, from my last review post:

Speaking of show mixes: The Ahmanson has added Ain’t Too Proud, a musical on the Temptations, to their 2018/2019 season, and they still have two shows to announce (see the end of the paragraph). It is looking even more likely that we’ll add that subscription, if we can get the cheap seats. As for the Pantages, they announce on Tuesday. As I wrote in my Aladdin writeup: We already know that Dear Even Hansen, Come From Away, Falsettos, and The Play That Goes Wrong will be going to the Ahmanson Theatre (FB). What does that leave for the Pantages, as they don’t produce their own. Here are my guesses: Bandstand, Anastasia, and Charlie and the Chocolate Factory are highly likely; so is the Miss Saigon revival. So would Groundhog Day, except they just cancelled their tour. If A Bronx Tale had announced a tour, it would also be likely. Ditto for Hello Dolly. Lesser possibilities are Amazing Grace, or A Night with Janis Joplin. In terms of potential retreads, I could see them bringing in the current Les Miz tour, and possibly the Fiddler on the Roof,  Lion King or Wicked tours, if they are still on the road. Also known to be going on tour/on tour, and thus possibilities for retreads, are Cats and Phantom, as they will draw in crowds and haven’t been in LA recently. Natasha, Pierre, and the Great Comet of 1812 has announced a tour, but I think the Pantages is too large for them. I could see them doing the Ahmanson. As for the Ahmanson Theatre (FB), which has two slots to announce, I predict that one will be a show in development, and the other will either be Natasha, Pierre, … , or some form of dance or ballet, like the Matthew Bourne stuff that they’ve done recently. 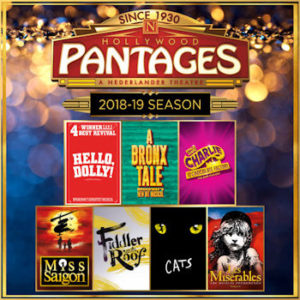 So, what did the Pantages announce? You can see their graphic to the right. Here are my thoughts on the shows:

What I found interesting was that neither Anastasia or Bandstand ended up at the Pantages; I really thought Anastasia would be a Pantages show. Either of these could end up in one of the unannounced slots at the Ahmanson; it is less likely that both would (but one never knows). Additionally, reflecting on things, I think that if Natasha, Pierre, and the Great Comet of 1812 does go on tour, it would end up either at the Mark Taper Forum or another theatre that would be willing to adapt to their immersive staging (perhaps the Pasadena Playhouse, or a theatre on Broadway). For the following season, there are a number of shows from the current Broadway season that are likely to show up: Escape to Margaritaville, The Band’s Visit, Spongebob Squarepants, and many others.

As I continue to clear out the news chum: My RSS feeds and emails have brought me a number of theatre season announcements, so it’s time for another episode in: Thoughts on a Theatre Season.

The La Mirada Theatre for the Performing Arts (FB) is a great musical theatre venue at the southern edge of LA County. They have recently announced their 2017/2018 season:

The Antaeus Theatre Company (FB) is a classic theatre company, formerly of North Hollywood, in new digs in Glendale. Their season has also just been announced:

Theatricum Botanticum (FB) in Topanga has at least one show of interest this summer:

Many years ago, we used to subscribe at the Pasadena Playhouse (FB). They have a new artistic director, and have announced their new season:

Lastly, , the Ahmanson Theatre (FB) has announced their one unspecified show: Five-time Tony Award® winner Susan Stroman (Show Boat, Contact, The Producers) returns to direct and choreograph an all-new production of the acclaimed musical comedy that launched her Broadway career —

Crazy for You.  This is potentially interesting, and always a fun show. However, it doesn’t make it worth a season pass, as I can get $25 tickets once they go on sale, and the cheapest season seats are $33.

The Hollywood Fringe Festival (FB) schedule is starting to gel. I’ve done some further planning over lunch, and here is how June stands. We are ticketing in two groups: this weekend (¹), and right after June 1st (²), to split the charges.

‡: I’m just a cybersecurity specialist who loves attending live performance, being an audience member, and telling my friends and others who read my blog about what I see, so they might see it as well.

I need your help in planning my Fringe schedule. The following was in my most recent theatre writeup about my plans for the Hollywood Fringe Festival (FB). I’m working on the schedule now. The shows of interest are as follows — however, the total for tickets is over $700, which is way too high. I need help paring down this list. Not all of these are currently in our schedule (¤ unscheduled as of now). If you know of any discounts for these shows, or have recommendations / disrecommendations, please let us know. Note that I’m generally restricted to Fringing on the weekends (living in the valley and working full-time).

My last post dealt with some season announcements I was mailed. Here is some other theatrical news I’ve seen of late:

As I have received some more season announcements (this time, to theatres to which I subscribe), it’s time for another installment of season reviews.

First up, Actors Co-Op (FB), which has announced their 2017-2018 season, as well as this summer’s Co-op Too! series (which is included with subscriptions). Here is Actor’s Co-Op’s next season:

A season like this demonstrates why someone subscribes to a theatre: to see shows you might not normally purchase tickets for. Given my druthers, as you probably noticed, I tend to pick musicals. Season subscriptions — back at Rep East, Pasadena Playhouse, or The Colony Theatre in the day, or at Actors Co-Op now, gives the depth to the season to balance my personal breadth. Of course, it doesn’t hurt that the season prices are fantastic: $85 for 5 shows for “Early Bird” (in the first three weeks), or $110 for regular subscriptions. Here’s how to subscribe.

Oh, and it turns out the seasons include the Actors Co-op Too! Summer productions… meaning we get three more shows for our subscription dollar. Here are this summer’s shows:

In many ways, this is like REP’s 81 Series: Short run specialty pies. Should be Good.

This brings us to our next season: The Valley Performing Arts Center (FB). They, too, have announced their 2017-2018 season. We typically do a mini-season with them: 5-8 shows out of the entire season. Here is their season, and whether I am likely to ticket:

Note that some of the

shows we may opt not to ticket, if the total gets too high, and we might decide to include some of the

Just before Christmas 2016, I attempted to predict what shows would be presented in the next Pantages and Ahmanson seasons. At the beginning of February, the Pantages made their announcement about their 2017-2018 season (or at least what is left of it after Hamilton presents), and I gave my thoughts on it and assessed my predictions. Today, the Ahmanson Theatre (FB) gave a rough announcement of their season (with more details in the Playbill version), so let’s see what I think and how I did.

Back in December, I summarized the shows that I thought were going on tour based on the announcements that I had seen, and I predicted the following:

There are numerous other shows currently coming to Broadway that I expect to tour, but I think they would be 2018-2019 at best. So how do I predict the seasons to work out? Here are my predictions:

So how did I do? The Pantages announced a six show season. Five of the six were on my Pantages list, one was on my Ahmanson list: Aladdin, School of Rock, Love Never Dies, The Color Purple, On Your Feet, and Waitress. So lets see how I did for the Ahmanson, based on what the Times has as their announcement:

One production will be announced later (obviously, in the January 1, 2018 through April 30, 2018 time period, although that period could easily support two shows — so why it is dark for so long is unknown and uncharacteristic of the Ahmanson. I am disappointed that the Ahmanson is not mounting Allegiance, but perhaps they are in negotiation for the TBA slot. Spring Awakening is less likely for that slot, given it was at the Wallis Annenberg just before Broadway.