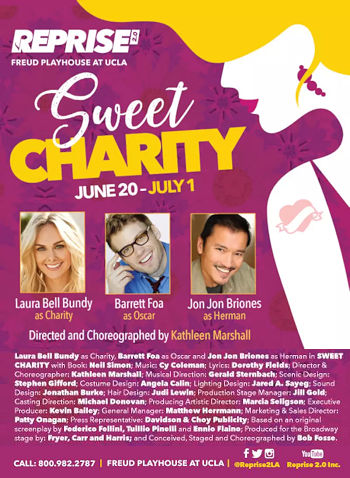 My slate of Fringe shows might have been over, but I still had one more show on Sunday night. I’ve written before about how I’m on a quest to see musicals I’ve only heard, but never seen. One of these is Cy Coleman’s Sweet Charity. Back in 2013,  DOMA Theatre Company (FB)  looked like they were going to do Sweet Charity, but then they postponed it and did Nine instead… and DOMA has been dark since 2015. So when I heard that Reprise 2.0 was doing Sweet Charity, and that I could get tickets to see it after my last Fringe show…. I had to squeeze in one more show.

Now Reprise itself is an interesting company. Originally chartered to do rarely performed musicals from the golden era, they lost their way under Jason Alexander’s helm. We were last at a Reprise show back in 2005 for Pippin. But after dying, Reprise was brought back to life by its original artistic director, Marcia Seligson (FB), with its original vision. Hence, Reprise 2.0 (FB).

Back to Sweet Charity: As with the musical Nine (funny coincidence there), it was based on a Federico Fellini film, Nights of Cabiria (screenplay by Federico Fellini, Tullio Pinelli, and Ennio Flaiano). Whereas that film focused on a prostitute, Charity focused on a dancer-for-hire. What’s that you ask? At one point, men who liked to dance would go to dance halls, and pay women to dance with them. Now they just ply them with alcohol. In any case, the focus was more that the lead character, Charity Hope Valentine, had terrible taste in men. She was always looking for love, and constantly believed that she would find it in the next guy. The guys, however, tended to just use her for what little money she has. The musical starts by her planning to get an apartment with a married man, only to have him dump her in the lake and steal her money. She then meets an Italian romantic film actor, who promptly shoves her in the closet while he makes up — and makes love — to his girlfriend. In essence, her character is captured in her name — Charity, as she is always giving; Hope, as she is always hopeful, and Valentine, as she is looking for love. Wanting to have a normal life, she goes to the 92nd St Y in New York to take a class — and gets stuck in the elevator with a neurotic accountant. They slowly fall in love, with the accountant believing she works in a bank. This one looks to be it, but in the end, it is not to be: he can’t get over her past profession at the dance hall, and all the men she has been with. And so, the musical ends where it begin, with Charity eternally hopeful.

Throughout all of this, there is commentary by the other dance hall hostesses — on the nature of men, on how they want to do more with their lives, and how the life with a husband and kids is probably something they’ll never see, but something they want desperately none-the-less. There are also numerous scenes that play up the humor, which isn’t a surprise as the adaption of the screenplay was done by Neil Simon.

The music in the show is upbeat and energetic. Cy Coleman, who did the music, is well known for his jazzier scores and this fits the bill quite well. He also seems to have a lot of scores (and been involved in a lot of projects) that looked — perhaps with an askew eye — at women in sex. There were some notions of this in his earlier Little Me, and it certainly reappeared in the later I Love My Wife, Welcome to the Club, and The Life. Lyrics were by Dorothy Fields. I’ll note one musical thing that caught my ears: in the scoring to Charity, there is reference to a song called the “Coney Island Waltz”. It is a wordless melody heard at two places in the show. I recognized it immediately; Coleman recycled that melody for a song in his later musical Barnum: it became the song, “Love Makes Such Fools Of Us All“. That’s actually quite an appropriate message for Charity. Music and dance-wise, this musical is probably better known for its original choreographer and star, the team of Bob Fosse and Gwen Verdon. The show has had a few revivals, notably with Debbie Allen (FB) and Christina Applegate (FB) in the lead roles.

In reading some of the other reviews on this show, reviewers seem to feel it was dated. They appeared to base this on the notion of dance hall girls and hired dancers, the notion of wanting a wife that was pure, and the general attitude towards women in this profession. But I disagree with that notion — I think Sweet Charity is actually quite relevant to these times. One needs to view Charity not as a reflection of actual life, but as a fairy-tale that focuses on the notion of hope in the face of adversity. Hope is Charity’s defining characteristic: in the face of men who beat her down, in the face of life that beats her down, in the face of situations that would cause anyone else to doubt themselves and despair, she remains ever hopeful. In today’s world, where the news every day is more and more depressing, when we’re face with the relentless beat of people that are pushing us down, hope like Charity’s is what we need to make it through. So I don’t see Charity as dated; I see it as a reminder of the power of hope.

It is also a reminder of the power of dance. Reprise 2.0’s version of Sweet Charity was directed and choreographed by Kathleen Marshall, a multiple-Tony winner for her direction and dance work. This production doesn’t let that reputation down. Dance and movement is strong throughout, from numbers like “Hey Big Spender” to the “Rich Mans Frug” to “Rhythm of Life”. These were strong ensemble numbers, showing the talent and movement and music. But, to me, some of the best moments were the introspective smaller ones, such as “There’s Gotta Be Something Better Than This” or “Baby Dream Your Dream”.

Marshall and her casting team assembled a strong cast for this show. In the lead position, dancing and singing her tuchis off, was Laura Bell Bundy (FB) as Charity Hope Valentine. Again, I saw critics complaining about her overtaxing her voice in the second act. I didn’t notice that — Charity is a character you don’t expect to be a strong singer, and the original Charity, Gwen Verdon, certainly wasn’t. Bundy’s voice fit the character well; more importantly her personality fit the character well and shone through in her performance. She had that a strong enthusiasm that radiated all the way to the back of the theatre (where I was, in the row between K and M). She was a strong dancer, suitably kooky, and someone who was, well, lovable. My only problem was her wig, which just seemed to, well, wig-like.

Playing off her as her main love interest was Barrett Foa (FB) as Oscar. Foa captured the character well — the slightly nebbish, timid character. He had a nice singing voice and a good chemistry with Bundy.

The other main characters that we see throughout were the denizens of the Ballroom: Jon Jon Briones (FB) as the manager, Herman; and the two dancers who were closest to Charity: Krystal Joy Brown (FB) as Helene and Yvette Gonzalez-Nacer (FB) as Nicky. Brown and Gonzalez-Nacer were particularly strong in the aforementioned numbers I liked: “There’s Gotta Be Something Better Than This” and “Baby Dream Your Dream”.

The other major named characters come in for a scene or two, and then are not scene (excused me, seen) again. These include Robert Mammana (FB) and Ashley Loren (FB) as Vittorio Vidal and Ursula March, respectively. They prompt the whole “If They Could See Me Now” number, without having to do any actual singing. There is also Terron Brooks (FB)’s Big Daddy, who does get to sing and bluster for one number before disappearing. All were enjoyable to watch, although mostly throwaway aspects in terms of the story.

Fringe is over, but there’s one more weekend of June, which will either bring a Muse/ique (FB) show or “Big Daddy” at Boulevard Music — I haven’t decided yet.

July will be a tad less busy than June. It starts with the 50th Anniversary of Gindling Hilltop Camp, followed by On Your Feet at the Hollywood Pantages (FB). For the next weekend, as Jane Eyre The Musical from Chromolume Theatre (FB) looks to be a dead parrot ⚰🐦., we’ve replaced it with Tabletop, a reading of a new musical about tabletop RPGs at the Charles Stewart Howard Playhouse (FB). The third weekend in July brings a Bat Mitzvah in Victorville, and Beauty and The Beast at 5 Star Theatricals (FB) that evening on Saturday, and a hold for the OperaWorks (FB) “Opera ReConstructed” at CSUN on Sunday. The last weekend is currently open; it turns out the Muse/ique (FB) show is not that interesting. August starts with Waitress at the Hollywood Pantages (FB) on Saturday, and the Actors Co-Op Too! production of Always Andrews: A Musical Tribute to the Andrews Sisters on Sunday at Actors Co-op (FB). The next weekend brings the last Actors Co-Op Too! production, Twelfth Night, or What You Will at Actors Co-op (FB). There may also be a production of The Most Happy Fella at MTW — I’m not sure about it, but the hold date is on the calendar.