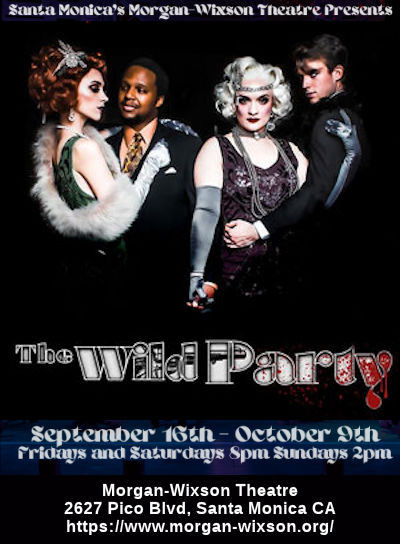 Boy, this is the weekend for musicals with strong sexual themes, isn’t it.

Back in 1926,  Joseph Moncure March wrote a poem called “The Wild Party”; it was rediscovered by Art Spiegelman in 1994 and subsequently came to the attention of two composers who turned it into a musical. You can see the full poem here; it starts:

Queenie was a blonde and her age stood still
And she danced twice a day in vaudeville.
Grey eyes. Lips like coals aglow.
Her face was a tinted mask of snow.
What hips! What shoulders! What a back she had!
Her legs were built to drive men mad.
And she did. She would skid.
But sooner or later they bored her
Sixteen a year was her order.

The poem was about Queenie, a low life vaudeville blonde and her boyfriend Burrs, a violent, small minded and jealous hoodlum and professional clown who together decide to throw a party. They do and it is a wild one.

As I said, two different composers decided to turn this poem into a musical. The musicals were both titled “The Wild Party”: one was written by Andrew Lippa and premiered in 2000 Off-Broadway; the other was written by Michael John LaChiusa and premiered in 2000 on Broadway. I’ve long had the CDs for both versions. Back in 2010, I was able to see the LaChiusa version at the Malibu Stage Company. Sometime back in 2019 I learned that Morgan-Wixson was planning to do the Lippa version (probably from Daniel Koh, who was the music director of the show). I put it on my calendar. And then COVID happened.

But luckily, Morgan Wixson didn’t let the production work go to waste, and just opened that production of The Wild Party, which I saw this afternoon.

It is interesting how two different artists interpret the same source material. We see this often with Shakespeare, where producers come up with wildly different ways of interpreting or presenting the same words. We see that here as well. Here’s how I described LaChiusa’s version back in 2010:

When we compare this with how Andrew Lippa (Book and Music) approached the material, certain elements have been toned down or changed. There’s no blackface. The racist elements are gone. There’s not quite as much backstory. There’s not the connection between Nadine and Mae, and although she is a minor, her age isn’t made clear. The black brother act is gone, and some of the other characters are less named. Now, admittedly, this could be a decision from the production team. But it is something I noticed comparing the shows.

There’s also the music. Looking at both shows in my iTunes Library, I liked songs from both shows, but seemed to like Lippa’s a little more. Perhaps that’s because they stick in my head. Lippa’s songs seem to be more of a mix of character and scene introduction songs (especially in the first act), and less memorable story songs. But I like the songs, and quite a few from the Lippa version are among my favorites (“An Old Fashioned Love Story”, “The Life of the Party”, “Raise the Roof”).

Another interesting “compare and contrast” is with last night’s show, Jagged Little Pill. Both, after all, were based upon popular poetry of the time. Here, The Wild Party really shows the problematic mores of the time: heavy drug use, heavy alcohol use, violence against women, and racism. No apologies. Jagged Little Pill reflects more modern mores: we see the consequence of actions. But in both shows: wild parties have consequences.

One more thing before I launch into the specifics of this production. Morgan-Wixson, alas, does one thing in this production I don’t like: a digital ONLY program, accessed via a QR code. This is horrible for program collectors, it requires use of phone and data, it is harder to read (especially for older patrons), and it provides no archival record. Provide a digital program if you must, but make some small number of printed copies available. They don’t have to be fancy: a simple printed booklet is fine.

Now as they say: on to the show.

The Lippa version of the musical follows the basic trajectory of the poem: Queenie and Burrs are stagnating, and decide to throw a party to bring some excitement back, or to create tension (as Queenie is turned on by violent men). A number of different folks attend the party, but notable is Kate (who wants Burrs for her). Kate brings along Mr. Black and aims him at Queenie. This sets up the tension, which leads to the eventual conclusion. Also notable is Mae and Eddie, for Mae looks a lot like Queenie and Eddie is a washed-up boxer. Guess what happens when Burrs mistakes Mae for Queenie. Yup. Other characters are more ancillary but present — notably Madeline True and Nadine. As the party goes on, the drugs and booze flow. Predictable results. Tempers flare. Guns (and probably other things) go off. Life is left in disarray. Unlike in Jagged Little Pill, it is questionable whether anyone learns anything.

Under the direction of Kristen Towers-Rowles, the production moves pretty well (there was one lag point about 2/3rd through the first act). The story holds your interest. The performers and their characterizations are good, although sometimes that is not always clear to the audience. A few performers, at times, seemed to be staring into the sunset. That could be the actor, or it could be a drugged or stone characterization. Somehow, that needs to be clearer. I found the sound balance a bit off. Some performers (notably Queenie) needed a bit more power in the voice (the performance was good, and the singing was good — it just needed a bit more power). If you see the show, contrast the power of Queenie vs. Kate. This is not to say the performance was bad — in fact, the performance was quite good. WIth a bit more power behind it, it could have been great. The choreography by Michael Marchak (who was also the asst director) was in general good, although there was a bit of going through the motions. This is something I expect will improve further in the run as folks get reacquainted with the movement. I was also particularly taken by the background characters and how they made the party realistic.

Daniel Koh was the music director. The program had no credit for musicians; it was unclear if the music was recorded or the musicians were in the wings. I didn’t see any musicians coming in, but they could have been there before me.

The Wild Party continues at the Morgan-Wixson in Santa Monica through October 9. I think this is well worth seeing — it is entertaining, it is a good exploration of a similar time in history, and it shows how mores have changed. Tickets are available through the MW Box Office, and discount tickets may be available through Goldstar.

Lastly, note I posted this without the usual heavy linking. That might come later.

For right now, we’re pretty much sticking with shows that come as part of our subscriptions or are of interest through our memberships. Looking ahead for the remainder of 2022:, the remaining September show is Daniel Fish’s interpretation of Oklahoma at the Ahmanson Theatre (FB). October will bring Sanctuary City at the The Pasadena Playhouse  (FB), Ghosts at the Odyssey Theatre Ensemble, The Addams Family at 5 Star Theatricals (FB), and To Kill a Mockingbird at Broadway in Hollywood (FB). November brings 2:22 – A Ghost Story at the Ahmanson Theatre (FB). Lastly, December will bring Annie at Broadway in Hollywood (FB).