Today’s news chum brings you three articles all related to media and music, in some form:

To close out our lunchtime news chum for the week, here are a few articles about some unexpected changes reported in this week’s news:

Today’s lunch time news chum brings together a collection of articles all having to do with games and amusements (as opposed to gaming the system — I may have an article on that tomorrow):

P.S.: Appropos of nothing, simply because a like it: A recipe for avgolomono soup.

Today, I visited my stepmother, and it got me thinking…. about gaming for good.

The backstory is that a few weeks ago (shortly before our trip to Berkeley), my stepmother had a small stroke. She’s going to have a full recovery, but is still in the hospital, hopefully being released next week. Today was the first chance I got to visit her. I’m pleased to see that she’s doing well: she’s talking — a bit slower than normal and its harder to find the words — and she’s moving — again, a bit slower than normal. We went with her to speech and cognitive therapy, and that’s where this post began to form in my head.

The exercises they had her doing were very similar to a lot of games. She was attempting to match shapes and fill spaces. She was completing sentences and writing words. I talked to the therapist a bit, and she agreed that a number of games could be very good for this. To my mind, games such as the ones in the Blokus family would be great, as might card games such as Coloretto or Set, as well as classics such as Scrabble  or Clue. I’m trying to think of accessible games–especially those that might be found at a Target or Barnes and Noble.

So I did some searching on Boardgame Geek and came up with other ideas, such as Rapid Recall, Apples to Apples, Qwirkle, Rummikube, or even classics like Boggle or Stratego.

This is why I love the boardgaming world. We’re not just the gigantic hex-grid games of old, or the dumb roll-and-move games. Boardgaming can provide games that will help people and challenge their brains. I welcome your suggestions in this thread of other games. 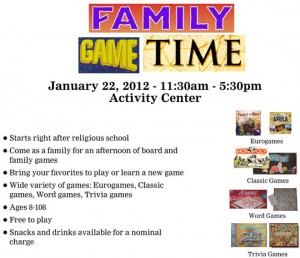 This is a reminder that the Men of TAS is hosting doing a family gaming (i.e., boardgaming) afternoon on Sunday, 1/22, at Ahavat Shalom in Northridge. The event is free; we’ll have some snacks available for a nominal charge (plus we’re likely to order in something if there is enough interest).

If you are into boardgaming, word games, or other non-electronic games… and you aren’t gamed out by the Games Day on Saturday, then I encourage you to come on over. I’d love to see you, and we can use people who know games to help teach games.

So remember, boardgaming at TAS on Sunday, starting around 1130am. Exit Route 118 at Reseda, go E on Rinaldi to Chimineas, make a right, and we’re on the other side of the bridge.

This is a reminder that our quasi-annual New Years Eve Boardgaming Party will be (duh) on New Years Eve. I’ve sent out invitations to local folk (i.e., Southern California) and potentially local folk who I thought would be interested. If you’ve seen the invitation, we hope you can make it — please let me know by commenting/responding in an appropriate place. If you’re in SoCal and might be interested, please contact me for specifics. Note: As this version of the post is public, I do reserve the right not to provide specifics if I have absolutely no idea who you are (so introduce yourself :-)).