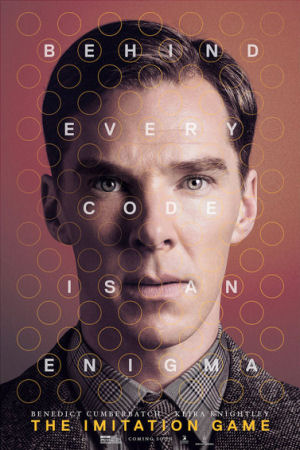 As you might have figured out by now, I’m a live theatre person. However, I do occasionally go to the movies, and one of those “movie days” is always Christmas Day. This year, after some back and forth on the particular movie, I settled on “The Imitation Game“, a bio-pic about Alan Turing (my wife vetoed “Into the Woods“, which I may see the first weekend of January; she went to go see “Night at the Museum 3“).

Alan Turing is an interesting, and quite tragic, fellow. Most folks in the computer science world know of Turing: the most prestigious award in the computing field is named after him (the ACM Turing Award), anyone studying computability theory learned of the Turing Machine, and anyone dealing with artificial intelligence knows of the Turing Test. Dayenu – that would have been enough. A smaller number of people may know of Turing’s real contribution: he was one of the people behind the breaking of the German Enigma code machine — an effort that quite probably led to the Allied victory against the Germans in WWII (and, ancillarily, one of the reasons that the Unix crypt utility is insecure, as it is based on the Enigma algorithms).  As an aside, I’ll note that those who really want to study Turing might look at the online Turing archive, a large web collection of digital facsimiles of original documents by Turing and other pioneers of computing.

The general unwashed public, however, knows little of Turing and little of cryptography. There have been plays and movies portraying Turing before: most notably Breaking the Code, a 1986 play by Hugh Whitmore that was later turned into a movie starring Derek Jacobi. Most of the portrayals focus on attempting to reconcile Turing’s cryptographic work with the secret that seemingly led to his death: his homosexuality.

All this Turing talk is because the latest attempt to explore Turing’s life is the movie The Imitation Game, based on the book “Alan Turing: The Enigma” by Andrew Hodges (who runs a detailed website on Turing and his life), adapted for the stage by Graham Moore. As with any entertainment writeup, we need to look from three areas: the story, the performances, and the technical.

The screenplay for The Imitation Game does a good job of telling a version of the story of Turing’s life. It certainly goes in deeper and provides more details than Breaking the Code did. It uses a framing device of an early 1950s burglary at Turing’s house to have Turing telling his story to the police, who ultimately uncover his homosexuality and prosecute him for it. The film keeps jumping back and forth in time between the 1950s police station, the war years at Bletchly Park, and Turing’s early years in Boarding School.

The problem, of course, is that this isn’t quite the truth. Films rarely are: they simplify facts in some areas, amplify facts in other areas, and create fictional peoples and stories in still other areas. This story does that in spades — while researching this writeup I found a good summary of the historical inaccuracies in the film. There are a number of key ones, with the most glaring being the fact that Turing was never accused of espionage, and never worked with the individual identified as the actual spy in the film. It also over-amplifies the relationship with Joan Clarke, under-emphasizes the other cryptography work that Turing did, and neglects to mention the fact that multiple machines were built. It also tends to under emphasize Turing’s death from cyanide poisoning, although they hint of it at the beginning of the movie. Turing’s life story is interesting enough — read the Wiki page to get a good idea of it — but the screenwriter chose to change it. Ah, Hollywood. Note that I have no idea if Hodges’ original book makes the same errors, but I’m inclined to doubt it.

“But besides that, how was the play, Mrs. Lincoln?” — If we set aside the historical inaccuracies (that is, we accept this fictional version as the story to be told), the progression works reasonably well. The jumping back and forth in time is not confusing, and the way the story introduces and builds the characters works well. The play also throws out some good quotes, most notably “it is the people no one imagines anything of who do the things that no one can imagine.” This quote is one of those wonderful inspirational lines that may goad people to get involved with science and engineering — this is a good thing.

The story also highlights a major dilemma the folks at Bletchly Park faced: they couldn’t let the Germans know they had broken the code; if they did, the Germans would change the code. Thus, they had to let some people die in order to save others. This was perhaps the most interesting question at the heart of the story. However, it is dispatched relatively quickly and doesn’t demonstrate the likely large moral debate that occurred.

The performances in the film were excellent. I’m not going to list the entire cast as I do with a play; there’s IMDB for that.  I will note that Benedict Cumberbach portrays Turing well, although it is unclear how much of the Aspergers mannerisms and stutter were an invention of the screenwriter. Keira Knightly does a good job with Joan Clarke, a fellow cryptographer and one-time fiancee of Turing. From what I’ve read of Clarke, I don’t think the role was written accurately portrays the character; however, Knightly does a good job with the role as written.

Let’s turn now to the technical side. If this were a stage show, I’d be talking about sound, lighting, and sets. Most of those just blend into the story in film; what film brings to the fore is the cinematic aspects. This film did a very nice job of establishing place and time through a mix of new sequences illustrating wartime England and grainy stock footage of bombings and such. Bletchly Park also seemed to be portrayed well, although I cannot compare it to the real thing. The good thing (to me) is that there were very few points where I became aware of the cinematographer trying to do tricks with the camera to create emphasis or mood.

Overall, I found the film quite enjoyable and worth what I paid for it. Whether it was a story that deserved the “big screen” treatment is less clear — the story would likely have worked on the small screen as well. Alas, there were few truly “need the big screen” movies out that our group could agree were worth seeing. I am disturbed by the historical inaccuracies — not because the screenwriter chose to put them in, but because this will likely be the version of the story that the unschooled will take away as Turing’s story.

Preview Notes: We have the following five movies previewed:

Upcoming Shows: There is one more show in December for me: A Christmas Carol, as interpreted by Zombie Joe’s Underground (FB) on December 28. January is filling up. The first weekend of January there’s no interesting live theatre, so I may go see the new “Into the Woods” movie. The following weekend brings two shows: “Serial Killer Barbie: The Musical” (FB) at the No Ho Arts Center on Friday January 9 and “An Evening with Groucho” at AJU with Frank Ferrente at American Jewish University on Sun January 11. The next weekend starts the Rep season with “Avenue Q” at REP East (FB) on Sat Sanuary 17. The following weekend is currently open (but I’m looking). January may conclude with the Cantors Concert on Sat January 31 at Temple Ahavat Shalom. February and March pick up even more, with “The Threepenny Opera” at A Noise Within (FB) on February 15, a hold for “Loch Ness” at the Chance Theatre (FB)  on February 21, “The Road to Appomattox” at The Colony Theatre (FB) on February 28, the MRJ Man of the Year dinner on March 7, “Carrie: The Musical” at La Mirada Theatre for the Performing Arts (FB) on March 14, a hold for “Drowsy Chaperone” at CSUN on Friday March 20, “Doubt” at REP East (FB) on Saturday March 21, “Newsies” at the Pantages (FB) on March 28, followed by Pesach and the Renaissance Faire on April 11. As always, I’m keeping my eyes open for interesting productions mentioned on sites such as Bitter-Lemons, and Musicals in LA, as well as productions I see on Goldstar, LA Stage Tix, Plays411.