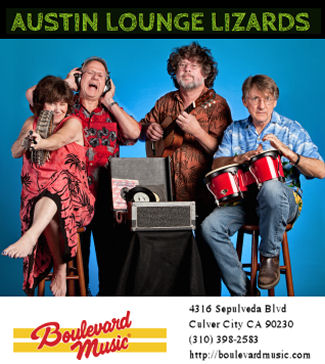 As I said in my last post, yesterday was a day of running. She Loves Me ended right around 5:45 PM (it started at 3:00 PM), and we had tickets for an 8:00 PM concert in Culver City. So rush off we did, grabbing dinner at Togos and flying the 51 miles between Chance Theatre (FB) in Anaheim and Boulevard Music (FB) in Culver City. Yes, Boulevard Music — there are now two small folk music venues on the westside of Los Angeles: the venerable McCabes and Boulevard, right near Culver and Sepulveda. We were running to Boulevard Music to see the Austin Lounge Lizards (FB), who were doing their first show in Southern California since 2001 in Encino. As they noted, they were able to come back because the restraining order ended. Note: We made it there in just about an hour, thanks to Google’s alternate routing.

For those who aren’t familiar with the Austin Lounge Lizards — shame on you. They are one of the best satirical bluegrass bands around (although right now, they are down a banjo player — which, depending on your view of the banjo, might be an improvement). If you like Weird Al; if you like the Arrogant Worms; if you like Tom Paxton’s short shelf life songs — you’ll like the Lizards. They combine humor with great musicality to create a very entertaining show.

A word on the venue, as it was new to us. Boulevard Music is much smaller than McCabes — they set up the folding chairs in the main showroom (instead of the room in back) and they can’t handle online ticket sales. But they are super friendly, and seem to be well connected folk-wise, given some of the other folks there for the show. Further, the parking is much much easier. I recommend you check out their concert list and sign up for their mailing list — you might learn about some interesting concerts.

As for the show itself — the show featured two original Lizards (Hank Card, Conrad Diesler) and two newer members (Darcie Deaville, and Bruce Jones). Former lizard Korey Simeone (FB), who was local, joined the group on quite a few songs. The show playlist was as follows (♦=New Song):

In short, the show was a mix of songs from throughout the Lizard’s performing career, with one new songs. A number of songs just can’t be done well without a banjo (how many times do you hear that!), and some really require Tom Pittman to work.

All in all, a good show…. and hopefully it won’t be 13 years before the Lizards are back in Southern California.

Upcoming Shows: There is one more show in December for me: A Christmas Carol, as interpreted by Zombie Joe’s Underground (FB) on December 28  (my wife is seeing The Klezmatics at Disney Hall on December 22). January is slowly filling up:  “An Evening with Groucho” at AJU with Frank Ferrente at American Jewish University on Sun January 11; “Avenue Q” at REP East (FB) on Sat Sanuary 17; and possibly the Cantors Concert on Sat January 31 at Temple Ahavat Shalom. February and March pick up even more, with “The Threepenny Opera” at A Noise Within (FB) on February 15, a hold for “Loch Ness” at the Chance Theatre (FB)  on February 21, “The Road to Appomattox” at The Colony Theatre (FB) on February 28, the MRJ Man of the Year dinner on March 7, “Carrie: The Musical” at La Mirada Theatre for the Performing Arts (FB) on March 14, a hold for “Drowsy Chaperone” at CSUN on Friday March 20, “Doubt” at REP East (FB) on Saturday March 21, “Newsies” at the Pantages (FB) on March 28, followed by Pesach and the Renaissance Faire on April 11. As always, I’m keeping my eyes open for interesting productions mentioned on sites such as Bitter-Lemons, and Musicals in LA, as well as productions I see on Goldstar, LA Stage Tix, Plays411.