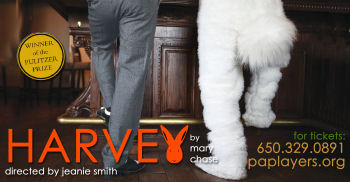 Here’s an adage to live your life by:

“In this world, you must be oh so smart, or oh so pleasant.” Well, for years I was smart. I recommend pleasant.

If you’re my age, there’s a good chance you may recognize that quote and its source. If you’re younger — well, you need to watch more Jimmy Stewart movies — in particular, a 1950 movie about Stewart and a 6′ 1½” white rabbit, or should I say pooka. That movie, in turn, was an adaptation of a Pulitzer Prize-winning stage play from 1944 by Mary Chase (yes, there was a day when stories moved from the stage to the screen, not vice-versa) called “Harvey“. “Harvey” is one of my absolute favorite movies, so when I found out that the Palo Alto Players (FB) were producing the stage version when I was going to be in the area, I started jonesing for tickets. Luckily, I was able to combine seeing the show with having dinner with a high school friend of mine, making it a even more perfect evening.

For those of you hiding under a rock, here’s the story. The Dowd’s are an old-money family. The matriarch of the family has died, leaving the house and all the money to her son, Elwood, who stayed home and took care of her as she died. Elwood shares the house with his (presumably widowed) older sister, Vita Louise Simmons, and her younger (and still single) daughter, Myrtle Mae Simmons. Both Vita and Myrtle Mae would like to see Myrtle Mae married off. Vita has one problem standing in the way of this: Elwood. For some time, Elwood has had a problematic friend: Harvey, a 6′ 1½” white rabbit that only Elwood can see. Elwood, a very pleasant young man, loves to introduce people to Harvey, invite them home, and give them money. To solve her problem, Vita works with the family attorney, Judge Gaffney, to have Elwood committed to a psychiatric home. She takes him to Chumley’s Rest, an institution for such individuals. As she is getting Elwood admitted, she admits that even she has occasionally seen Harvey. Dr. Sanderson and Nurse Kelley (who have already had the orderly Wilson take Elwood upstairs) realize that it is really Vita that should be committed, and they take her upstairs and release Elwood. But then Chumley arrives with Mrs. Chumley, and after Mrs. Chumley relates her interaction with Elwood, they realize that they had it right the first time. The comedy takes off from there.

The story of Harvey works on many levels, primarily because of changes it brings to many of the original characters. Elwood moves from being someone whom you believe to be crazy, who sees imaginary characters due to drink… to someone who you realize has intentionally made a decision to live life in a certain positive way, and who actually sees as mythological creature. Vita moves the other direction — from a normal society woman to someone whom you realize is delusional and dealing with depression — and not due to her seeing Harvey occasionally. Myrtle Mae moves from someone who wants the best marriage and the entrance to society to someone who wants any man… and finds him in Wilson. Dr. Sanderson and Nurse Kelley move from estranged work colleagues to being a couple. And Dr. Chumley, perhaps, finds the peace he is seeking. Such is the power of the pooka.

For those only familiar with the movie, there are some differences in the original play. The play is much more limited in locale — whereas the movie moved out to Charlie’s Bar and the gate at the Sanitarium, the play restricts itself to the Dowd house and Chumley’s rest. The ending is a bit different as well, for there is no intimation that Harvey went off to Akron with Dr. Chumley before returning to Dowd.

But those are unnecessary elements. The essential story is on stage, and it is wonderful. The Palo Alto Player’s production of it, directed by Jeanie K. Smith (FB), is also very good — especially when you consider that it is at the community theatre level with an entire non-equity, and in many cases, a non-theatrical-career, cast. I have a few quibbles with characterizations and performances, but for the most part the production works well. Note that, for the most part, you do need to set aside the images of the characters from the film, as the actors on stage look nothing like the actors on film.

In the lead, playing Elwood Dowd, is Evan Michael Schumacher (FB). Schumacher is the minor casting problem I alluded to earlier — he appears to be too young for the role. Dowd is, according to the script, 37 (which is old for the time period of the story). Schumacher appeared to be pushing his mid-20s. But that aside, Schumacher gave an absolutely spot on performance. He captured Dowd’s pleasantness perfectly, and had these wonderful silent mannerisms and looks that made him believable as the character. He made you believe that he actually saw, and more importantly, believed in, Harvey. They were good friends, and they were in on the joke in a little way. This show is worth seeing for Schumacher’s performance alone.

Supporting Dowd are Mary Price Moore (FB) as Veta Louise Simmons and Alison Koch (FB) as Myrtle Mae Simmons. These are the first two characters we see, and these are the performance problems I alluded to earlier. Both come off as a little too, umm, theatrical and broad. I don’t know if that has how the characters are written, but they clearly aren’t as naturalistic as we’ve come to expect on stage. Again, setting that aside, the two are clearly having fun with the characters and, over the course of the show, the performances tend to grow on you. In particular, I really like’s Koch’s interactions with Wilson — these were totally cute and a hoot to watch. Moore was at her best as the crazy Veta.

Turning to the secondary characters… Nicole Martin/FB worked well as Nurse Ruth Kelley — you could see both her dedication and her love for Dr. Sanderson come through. As Dr. Sanderson, Scott Solomon didn’t quite fit the character. He was too old for someone just out of medical school, and didn’t quite have the chemistry with Nurse Kelley. Other than that, his performance was good. Lastly, as Duane Wilson (the orderly), Drew Reitz (FB) was great. He brought such glee to Wilson — this was a man that truly enjoyed putting people in the looney bin. Such dedication is rare these days :-). He also had a wonderful unspoken chemistry with Koch’s Myrtle Mae that made them believable as a couple.

Rounding out the cast were Roberta Morris/FB as Mrs. Ethel Chauvenet, John Musgrave (FB) as Dr.William R. Chumley, Celia Maurice (FB) as Betty Chumley, Tom Farley/FB as Judge Omar Gaffney, and Scott Stanley/FB as E. J. Lofgren. Of these, I’d like to highlight the performances of the two Chumleys. Musgrave’s Dr. Chumley was very strong — he was believable as the head of the institution, and yet had the vulnerability that made him also believable as someone who needed Harvey in his life. Maurice’s Mrs. Chumley, although a one-scene role, worked quite well — I would have loved to see her attacking the role of Veta Louise.

Turning to the technical side. The sound design of Gordon Smith was only noticeable in the interstitial music, which had to be longer due to the time it took to change the sets from one locale to another. Similarly, the lighting design of Selina G. Young was completely unnoticeable — which is a good thing, as it meant that the lighting seemed natural and not forced. The scenic design of Ron Gasparinetti consisted primarily of very large flats that were rolled in or lowered. They worked well to establish place, although the time to change from one local to another was longer as a result. The properties, designed by Pat Tyler, worked well — particularly Harvey’s hat and the painting of Harvey and Elwood (I appreciated the touch of having the painting be of the actor in the role — does he get to take it home at the end as a door prize?). The costumes of Cynthia Preciado, combined with the hair and makeup design of  Shibourne Thill (who also served as stage manager)  didn’t scream out as being outlandishly non-period, and the only problem I saw were the problematic hair extensions for Veta Louise after she returns from the sanitarium.

Theatre continues this weekend with “The Immigrant“ at Tabard Theatre (FB) in San Jose, and the Dickens Fair (FB) on Sunday in Daly City. After I return, it is “Kinky Boots” at the Pantages (FB) on Sat 11/29. As for December, I just ticketed “She Loves Me” at Chance Theatre (FB) in Anaheim on 12/20, and we’ll probably go see “Joseph and His Amazing Technicolor Dreamcoat” at Nobel Middle School just before ACSAC. Right now, there is only one show booked for January 2015 – “An Evening with Groucho” at AJU with Frank Ferrente; additionally we’ll likely have the first show of the REP East (FB) season: “Avenue Q“.  As always, I’m keeping my eyes open for interesting productions mentioned on sites such as Bitter-Lemons, and Musicals in LA, as well as productions I see on Goldstar, LA Stage Tix, Plays411.