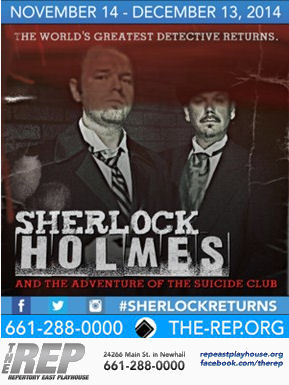 As an author, you hope that your literary creations live on after you; if this occurs, your memory stays alive long after the body is gone. When we think of Oz, we think of L. Frank Baum (even if, as is the case for Wicked, the real author is Gregory Maguire). When we think of Sherlock Holmes, we think of Sir Arthur Conan Doyle. Doyle’s Holmes has proved remarkably adaptable to many mileaus, as we currently see on our TV screens with both the BBC “Sherlock” and the CBS “Elementary” (which I enjoy). Sherlock has also seen many adaptions for the stage, many of which I have written about (as Repertory East Playhouse enjoys doing Sherlock stories). One of the most recent Sherlock stage adaptions was commissioned by the Arizona Theatre Company in 2011.  There, as the result of a bet between an artistic director and a playwright, a new play was born. The story, as told in the excellent Play Guide for the play from ATC, is this: The artistic director of ATC and author Jeffrey Hatcher were visiting Minneapolis, and went to see one of the many Sherlock Holmes plays. At intermission Hatcher was poking holes in the logic of the play, since of course a Sherlock Holmes play has to have airtight logic. Hatcher said to the ATC director something like, “Well I can write a better Sherlock Holmes play
than anyone.” And he said, “Prove it.” The result: “Sherlock Holmes and the Adventures of the Suicide Club“, a production of which just opened at Repertory East Playhouse (REP East) (FB) in Newhall (and which we saw last night).

To build his play, Hatcher took Doyle’s creations and transported them into a different story, adapting both to create a new hybrid story. This has been done a lot with Sherlock Holmes, to varying results. The Sir Arthur Conan Doyle estate has tried to keep a lid on all stories that use Holmes; I could find no statement that this new play was officially licensed from the estate. I’ll note that it no longer matters, as the Supreme Court just ruled that Sherlock and the characters are in the public domain (so let the Holmes/Watson slash fiction begin, ugh). In any case, the story in the play is not canon. [I will note that the play does require credit be given to the Arizona Theatre Company, so I’ll do so here.]

For this play, Hatcher combined the basic Holmes characters and settings (Holmes, Watson, Mycroft, 221-B Baker Street) with a collection of short stories by Robert Louis Stevenson written long before Sherlock Holmes. These stories dealt with an organization called “The Suicide Club“, and involved an investigator, Prince Florizel of Bohemia, and his assistant, Colonel Geraldine, having a series of adventures involving the club. I’ll let you read the Wiki page on the stories if you want, as most of the elements of stories remained in the plot of the play. As I noted, Hatcher transformed Florizel and Geraldine into Holmes and Watson, shifted the action to 1916 in London, and brought in some elements of the surrounding geo-political situation. Hatcher drew on his experience as a TV writer for such detectives as Columbo.

As with any Holmes story, you don’t want to give away the plot. Dramatists Play Service, who licenses the play, describes it thusly: “In the heart of London, behind the impassive facade of a windowless house, some of Europe’s most powerful men gather to play a game. The game is murder, and this is The Suicide Club. But the club has a new member, Sherlock Holmes: brilliant, brooding, the greatest detective in the world. Why does Holmes wish to die? Can his friend Dr. Watson save him? Or doesn’t Holmes want to be saved?”

Now you know the background. As with any stage production, assessing it requires looking at three parts (four, if it is a musical): the story, the performance, (the dance and music,) and the technical side. How well did Hatcher do creating this hybrid? Was it a Frankenstein monster, or a long-lived organ transplant?

To me, the story was about 85% there. A friend of mine (who attended with us) noted that a good detective story should be dropping clues along the way as to the final outcome. He didn’t see such clues in the first act; neither did I. He thought that hurt the presentation of the story; I didn’t. I did notice that the story had lots of scene changes (unlike other Sherlock plays), and a lot less of the deductive Holmes reasoning one has come to expect from the play. In fact, there was a lot less Holmes/Watson interplay than one usually sees. This added to the graft-i-ness of the story. But if you set those expectations aside, the story itself was a good one. It had many twists that I didn’t see coming, and although I had figured out some of the end game, I didn’t completely figure it out until the reveal at the end. That’s why I assessed it at 85%; I think an author more skilled in the world of Sherlock Holmes could likely have done better. As such, I don’t think that Hatcher won his bet with the ATC director; this wasn’t a better Sherlock play than anyone else could have written. It might be a good detective story, but the question was “a Sherlock play”.

Let’s turn to the performance side of the question. This production was, in many ways, a REP family affair. Sherlock stories tend to bring the people behind the REP to the stage: In this case, the REP Executive Director, Ovington Michael Owston (FB), was Watson; the REP Artistic Director,  Mikee Schwinn/FB, was Holmes; and the REP Board president, Bill Quinn/FB, returned to the stage to play two minor characters. Additionally, another REP regular, J. T. Centonze (FB), was also back on stage. This didn’t hurt the production; rather, it is one of the times that REP gives the feeling that it is a true repertory company made up completely of people who love being on stage (something, I’ll note, that I could never do, so they have my respect).

As the leads, Schwinn and Owston dropped comfortably back into the characters (having portrayed them on at least two previous REP Sherlock outings). The two are good friends in real life, and that comfort is visible on the stage in the unspoken interplay between the two. Although there were a few line hesitations (not surprising given the amount of dialogue, limited rehearsal, and the fact that this was the 2nd performance), they were quickly forgotten when viewed in the overall. These two are just fun to watch.

Supporting the leads were a variety of different characters. The ones that stand out in my memory are Collette Rutherford (FB)’s portrayal of the club secretary, Jessica Lynn Parson (FB)’s portrayal of Christiane DeLabegassier, and Joey Prata/FB‘s Prince Nikita Starloff. To go into more detail about why they stood out might reveal plot. Rounding out the remainder of the cast were Joe Roselund (FB) (Mr. Williams/Mr. Roundy); J. T. Centonze (FB) (Mr. Richards / Mycroft Holmes); Bill Quinn/FB (Mr. George / Inspector Micklewhite); Paul Nieman (FB) (Mr. Henry), and Nancy Lantis (FB) (Mrs. Hudson / Mrs. O’Malley / Older Woman). The production was directed by Kimbyrly M. Valis (FB). An interesting note discovered while building the links is that Valis is a Holmes purist — I’m curious how much that influenced how she had the actors portray things on stage.

On the technical side, REP did its usual excellent job. The sound design was by REP regular Nanook/FB ; lighting design was by William Thomas Andrew Davies/FB (as REP regular Tim Christianson/FB was unavailable). I’ll note this is the first time I’ve seen extensive use of the LED light bars that were acquired for “Return from the Forbidden Planet“. Projections were by Rick Pratt (FB) and served to augment Mikee and O’s set design. Costumes were designed by Tonya Nelson (FB) and were courtesy of No Strings Designed Costumes. Vicky Lightner/FB was the stage manager. “Sherlock Holmes and the Adventures of the Suicide Club” was produced by Mikee Schwinn/FB and Ovington Michael Owston (FB).

“Sherlock Holmes and the Adventures of the Suicide Club ” continues at Repertory East (FB) until December 13.  Tickets are available through the REP East Online Box Office, as well as through Goldstar.

One other note: Last night was the tree lighting in downtown Newhall. Had we known this, we would have picked a different night. Everything was packed, and had not a little birdie (thank you Johnny) told us about this at the last minute, we might not have made the show. As it was, we arrived around 6pm, walked down to a fast-food Mexican place (because the places next to REP had no seating until after 7pm, and the show started at 8pm), still didn’t get to order until 6:40 PM (due to the backup), and didn’t get our food until 7:15 PM. We made it back in time, but next time we’ll avoid the crowds.

Theatre continues next weekend when I visit my daughter Erin in Berkeley between 11/20 and 11/26, starting with “Harvey” at Palo Alto Players (FB) in Palo Alto for Friday 11/21. That will be followed Saturday afternoon with “The Immigrant“ at Tabard Theatre (FB) in San Jose, and the Dickens Fair (FB) on Sunday in Daly City. Who knows, I might even squeeze in “Rhinocerous” at the UC Berkeley Theatre Department (FB). After I return, it is “Kinky Boots” at the Pantages (FB) on Sat 11/29. As for December, I just ticketed “She Loves Me” at Chance Theatre (FB) in Anaheim on 12/20, and we’ll probably go see “Joseph and His Amazing Technicolor Dreamcoat” at Nobel Middle School just before ACSAC. Right now, there is only one show booked for January 2015 – “An Evening with Groucho” at AJU with Frank Ferrente; additionally we’ll likely have the first show of the REP East (FB) season: “Avenue Q“.  As always, I’m keeping my eyes open for interesting productions mentioned on sites such as Bitter-Lemons, and Musicals in LA, as well as productions I see on Goldstar, LA Stage Tix, Plays411.