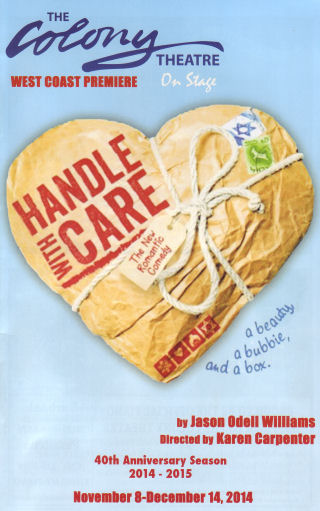 Normally, when I write up shows I’ve seen at the The Colony Theatre (FB), you’re getting the write-up just before the last show. That’s just because that’s when our season tickets happen to be. However, for the Colony’s current show, our season tickets are just before the start of the Annual Computer Security Applications Conference in New Orleans (you are going, aren’t you — advance registration closes November 14), so I had to change the date. Due to a busy theatre calendar, this means we saw the new Colony show “Handle With Care“‘s second performance. So, for a change, you can act upon my recommendation to go.

I should warn you that the advertising for “Handle With Care” (written by Jason Odell Williams (FB), directed by Karen Carpenter (FB)) is misleading. The elevator pitch advertising calls it a “Jewish Christmas Play”. Sorry, but the only real connection to Christmas is that it occurs on Christmas Eve, which really isn’t that major of a plot contrivance. The short description on the Colony website is just a little better:

Magic can happen in the unlikeliest places ─ like Christmas Eve in a seedy motel, where fate and bizarre circumstances bring together a young Israeli woman who has little command of English, and a young American man with little command of romance. Is their love an accident? Pure coincidence? Or is it destiny that’s been generations in the making? It’s a wonderful new play about love, communication, fate, and the importance of GPS-enabled tracking devices.

GPS-enabled tracking devices? C’mon, again, not a major plot point at all.

Let me give  you a better description of the setup. Ayelet, a young Israeli woman with little English ability, has been convinced to visit America with her safta (grandmother in Hebrew), Edna. Edna wants Ayelet to visit America to get her over the depression from the loss of a long-term boyfriend (along with some other reasons, which reveal themselves during the story). After visiting a number of towns in Virginia, they end up in a seedy motel in Goodview, VA. Shortly after arriving, Edna dies, and Ayelet makes arrangement to ship her body back to Israel. She contacts DHQ, a shipping service, and they send Terrence, one of their drivers, to pick up Ayelet and take her and the body to the airport to fly back to Israel. While waiting for Ayelet to pack, Terrence goes out to fuel the truck… and loses the box containing the body. All of the above you learn during flashbacks during the story. When the story opens, however, you just have Ayelet distraught and upset in rapid-fire Hebrew, and Terrence, who knows no Hebrew at all, trying to explain what happens. To help him, he calls in his Jewish-but-Secular friend Josh, because (of course) all Jews know Israeli Hebrew fluently. Josh himself is coming off a bad loss — again, we learn the details during the play — and he thinks Terrence is trying to set him up.

Now that you know the story but not all the twists, let’s assess the story. There are two ways to look at it. For audience members that know not of Jews (yes, they do exist in LA) or Israelis (yes, they too do exist in LA), a lot of this play will go over their heads. They’ll be confused by the Hebrew, they won’t get some of the Jewish jokes or the jokes about Israel. Still, they’ll be amused by how the story plays out.

For folks like me in the audience, who know Judaism well, know a smattering of Hebrew, and know Israelis well — they’ll like the show ever more. From my little knowledge,  the director (who also directed the show off Broadway) captures the Israeli mannerisms well. This may be because the lead actress, Charlotte Cohn (FB), not only played the role off-Broadway and is married to the playwright, but is also Israeli (and Danish).

Now, for folks that speak Hebrew fluently… I have no idea. My Hebrew isn’t that good; I’m at the level of Josh in the play (or worse). I’d be curious how well the Hebrew Ayelet speaks fits the story — the few words I could hear seemed to work.

In the end, what “Handle With Care” turns out to be is a very cute story about people finding love, perhaps where they didn’t expect it. However, what it isn’t is a Christmas story. Sure, it happens just before Christmas, serving to limit the availability of DHQ drivers. Sure, It’s a Wonderful Life is on the TV, but that’s just so people can impersonate Jimmy Stewart. There’s no real connection to the holiday; and certainly no clash of the holiday titans. Go to this show because you want to see a cute, Jewish/Israeli themed love story. Go to this play because you want to see a story that paints Israelis as real people — just like you and me.

As I’ve noted before, in the lead position was Charlotte Cohn (FB). Cohn knows this story well —  she’s a Danish-Israeli Jew married to a “lapsed” Catholic-Protestant (the playwright). She brings a lot of fun and passion to the part — you can see she enjoys playing this character and bringing this young woman to life.  She’s just fun to watch. Playing off her, as Josh, is Tyler Pierce (FB). Pierce gives off a very affable air that works well for the character; he’s believable as a relatively non-practicing Jew.

Rounding out the cast are Jeff Marlow (FB) as Terrence and Marcia Rodd (FB) as Edna. Marlow is fun to watch as Terrence — he radiates a youthful joy and innocence (or perhaps it is stupidity) that is both infectuous… and annoying to the other characters. He screwed up, is confronted by something and someone he doesn’t understand, and is grabbing for something to hold on to. Rodd’s Edna is the opposite: centered, strange, and clearly driven by some purpose that neither the audience (nor Ayelet) comprehends (until it is made clear in the second act :-)).

In short: this piece is well performed and directed.

Turning to the technical side: The scenic design by David Potts was very nice — we were sitting on the right side (as opposed to our usual center), and I appreciated that he had the attention to detail that was only visible to those on the side (i.e., real fixtures in the bathroom). Potts created an excellent run down motel set (aided by the properties and set dressing of John McElveney (FB) and scenic art by Orlando de la Paz). I also noted that he had different levels of snow on the roof of the motel depending on the particular day. The sound design by Drew Dalzell (FB) (based on an original design by Jill Du Boff (FB)) was also quite nice — I particularly enjoyed the use of Eli Eli in Act II and I’d love to find a copy of that recording. The lighting design by Jared A. Sayeg (FB) worked well to establish the mood, and the costumes by Dianne K. Graebner (FB) seemed to fit the characters. Mary K. Klinger (FB) was the production stage manager. The Colony is under the artistic direction of Barbara Beckley.

“Handle With Care” continues at The Colony Theatre (FB) through December 14, 2014. Discount tickets may be available through Goldstar or LA Stage Alliance.

Upcoming Theatre and Concerts:  November is busy, busy, busy. This week brings a trip out to Orange Empire Railway Museum to see my buddy Thomas on 11/11, the Nottingham Festival (during the day) and “Sherlock Holmes and the Suicide Club” at REP East (FB) (in the evening) on Sat 11/15. I’m also seeing theatre when I visit my daughter Erin in Berkeley between 11/20 and 11/26, starting with “Harvey” at Palo Alto Players (FB) in Palo Alto for Friday 11/21. That will be followed Saturday afternoon with “The Immigrant“ at Tabard Theatre (FB) in San Jose, and the Dickens Fair (FB) on Sunday in Daly City. Who knows, I might even squeeze in “Rhinocerous” at the UC Berkeley Theatre Department (FB). After I return, it is “Kinky Boots” at the Pantages (FB) on Sat 11/29. As for December, I just ticketed “She Loves Me” at Chance Theatre (FB) in Anaheim on 12/20, and we’ll probably go see “Joseph and His Amazing Technicolor Dreamcoat” at Nobel Middle School just before ACSAC. Right now, there is only one show booked for January 2015 – “An Evening with Groucho” at AJU with Frank Ferrente; additionally we’ll likely have the first show of the REP East (FB) season: “Avenue Q“.  As always, I’m keeping my eyes open for interesting productions mentioned on sites such as Bitter-Lemons, and Musicals in LA, as well as productions I see on Goldstar, LA Stage Tix, Plays411.