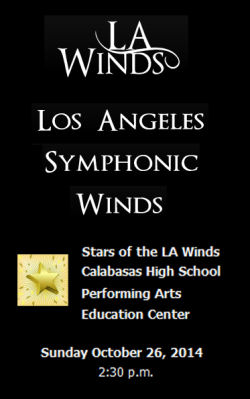 If you recall from my write-up of “Pippin“, I said we had two shows this weekend. The second show came about because some friends of ours (the Past President of MoTAS; I’m the current Prez) had the audacity to skip away the weekend of the Golf Tournament to take a cruise to Hawaii. They offered us their tickets, and knowing that my wife loves symphony music, we accepted. As a result, Sunday saw us not only scoping out Calabasas for the location for the tournament, but going to the new Performing Arts Center at Calabasas High for the special LA Symphonic Winds performance “Stars of the LA Winds”.

The 100 piece Los Angeles Symphonic Winds is a community band in Los Angeles. Membership is drawn from the vast pool of gifted Los Angeles-based professional, semi-professional and amateur musicians, many of whom have performed with major symphonies, motion picture and television recording studio orchestras and entertainment-world headliners. The L.A. Winds normally presents a six concert subscription series before sold-out houses in the beautiful Performing Arts Center on the campus of picturesque, suburban Los Angeles Pierce College (but as that is being rebuilt, they were in Calabasas).

The program we saw was part of the Daniel Pearl World Music Days concert series, and highlighted select members of the Winds. Here is what was on the program:

There are far too many members of the Winds to list them all, but you can find them at the Winds Website.

Upcoming Theatre and Concerts:  November is back to busy, with “Big Fish” at Musical Theatre West (FB) on Sat 11/1, “Handle with Care” at The Colony Theatre (FB) on Sun 11/9 (shifting to avoid ACSAC and opening night), a trip out to Orange Empire Railway Museum to see my buddy Thomas on 11/11,  “Sherlock Holmes and the Suicide Club” at REP East (FB) on Sat 11/15, the Nottingham Festival on Sun 11/16, and “Kinky Boots” at the Pantages (FB) on Sat 11/29. I may also see some theatre when I visit my daughter Erin in Berkeley between 11/20 and 11/26. Right now, I’ve scheduled “Harvey” at Palo Alto Players (FB) in Palo Alto for Friday 11/21, and I’m looking at “The Immigrant“ at Tabard Theatre (FB) in San Jose, , “Rhinocerous” at the UC Berkeley Theatre Department (FB), or possibly a show at UC Santa Cruz featuring a family friend in the cast or crew. [As a PS on the above: I’m trying to figure out a way to balance “The Immigrant”, the show at Santa Cruz, and Dickens Fair on one weekend. Am I crazy?] As for December, I just ticketed “She Loves Me” at Chance Theatre (FB) in Anaheim on 12/20, and we’ll probably go see “Joseph and His Amazing Technicolor Dreamcoat” at Nobel Middle School just before ACSAC. Right now, there is only one show booked for January 2015 – “An Evening with Groucho” at AJU with Frank Ferrente. As always, I’m keeping my eyes open for interesting productions mentioned on sites such as Bitter-Lemons, and Musicals in LA, as well as productions I see on Goldstar, LA Stage Tix, Plays411.

2 Replies to “Blowing in the Winds”