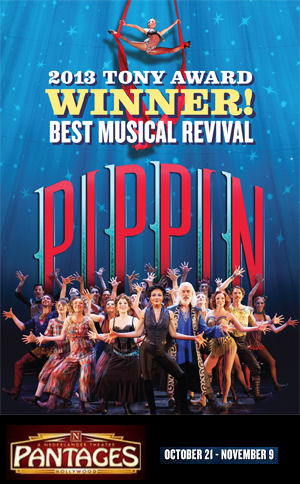 “Pippin” has one of my favorite scores — I love all the music on the original 1972 cast album, and I’ve seen the show twice in Los Angeles: once in the Reprise 2005 production (with Sam Harris as the Leading Player, Michael Arden as Pippin, Jean Louisa Kelly as Catherine, Mimi Hines as Berthe, and Conrad John Schuck as Charlemange), and once in the East West production (with Marcus Choi as the Leading Player, Ethan Le Phong as Pippin, Meagan McConnell as Catherine, Gedde Watanabbe as Berthe, and Mike Hagiwara as Charlemange). The two were as different as night and day, but served the story well. When I heard that Diane Paulus had reimagined in a Cirque-de-Solais (Circus) style, and after I saw the performance at the 2013 Tony Awards, I knew I had to see it when it came to LA. This, of course, meant toddling down to the Pantage, which we did this afternoon, to see the revival of Pippin.

So what did I think of this retelling of Pippin’s journey. Much of it worked, and much of it worked well. Some things didn’t. Let me give you the basic story, and then we’ll explore the good and the bad.

For those not familiar, Pippin is the story of the son of Charlemagne, King of France. It is the story of Pippin’s search to find meaning in life, egged on by the leading player (and hence, note that the Leading Player is “leading” in the sense of “leading the witness”, not “in the lead”). Pippin wants something extraordinary out of life, not an ordinary existence. He tries to be a soldier, but it is not for him. He visits his grandmother, but her lessons are not for him. He tries the life of physical pleasure. Not for him. He kills his father, but being King is not for him, so his father comes back to life (don’t ask). He tries many different things, including the simple life on a farm. Nothing is extraordinary. Finally, the lead player attempts to egg him on to a glorious finale in flame. But he comes to realize that it is alright to be ordinary, with the love of a good woman and son.

Let’s start with what I didn’t like. First: the hands. Mind you, I’m not complaining about the dancing in general, which was great, nor am I complaining about the use of hands in the dance, which is a Fosse trademark. Rather, they overused hand motions to ill-effect making them seem exaggerated and off. I’ll fault the director on this one. Second: the Leading Player. I liked the sense of the reimagining of the leading player with a bit more of a jazzy take on the songs — that was fine. The problem was: Sasha Allen (FB) just wasn’t up to it. She was good — I’ll give you that — and she had the acting and dance side of the role down pat. The problem is that I grew up with Ben Vereen‘s performance, and I’ve seen Sam Harris in the role. Her voice just doesn’t currently have the sustained power that the role requires: this was clearly evident in “On The Right Track” or in “Glory”, where she kept taking breaths at odd places. Patina Miller, who led the revival, had the requisite power and presence. Ah, the perils of a tour cast. Lastly, they (in my opinion) butchered “War Is A Science” when they reworked it for the revival. The original version, perhaps, had too many echoes of Vietnam that don’t fit as well today, but I just didn’t like the rewording and it made the song off for me.

Let’s go from there to what I did like. First and foremost, the circus addition was spectacular. Pippin has always had the elements and feeling of a circus, and this just brought it, and the magic, to life. As with Bring It On – The Musical, the producers brought in real circus performers as part of the cast, and it worked well. Now they just need to do this to Barnum! Seriously, the additional balance and risk of the performances added a lot to Pippin’s journey. Next, Andrea Martin as Berthe. In the original cast, Berthe was played by Irene Ryan, who everyone knew as Granny on the Beverly Hillbillies. She was on stage for the one scene. Subsequent performances have played similarly: older actors on for just that role. As promised in her LA Times article, Martin brought something new and special to Berthe — something I won’t spoil — but it changed her character completely. She was reworked to be part of the characters on stage in a number of group scenes, and it was just great. Third, the other original revival stars: Matthew James Thomas (FB) as Pippin, and John Rubinstein (FB) as Charlemange. Thomas brought a wonderful boyish energy and playfulness to Pippin. His voice wasn’t as strong as some as the other’s I’ve seen, but it worked well for his performance in the role. Rubinstein was the original Pippin in the 1972 production, and he seemed to just be having fun with with this production and the role. Modulo the problems with “War is a Science” (which I blame more on the director and Stephen Schwartz tinkering with the music), he was just fun to watch.

What else worked… and didn’t. I liked the revised ending, with the hint of Theo (Lucas Schultz (FB) at our performance, alternating with Zachary Mackiewicz (FB)) continuing the quest. Schultz, in general, gave off a great “kid” vibe in his few scenes. Lewis (Callan Bergmann (FB)), on the other hand, came off as more playful than menacing — I think my favorite portrayal of Lewis was the one in the East West version, where there was real menace.  I really liked Kristine Reese (FB)’s portrayal of Catherine, but then I seem to love Catherine’s in general (I really liked Jean Louisa Kelly), perhaps because the role is so, ordinary. On the other hand, although Sabrina Harper‘s performance of Fastrada was very strong (and her costume changes and vocal performance during “Spread a Little Sunshine” were amazing), she came off as a little young for a stepmother of Lewis — and not quite as menacing as a Fastrada should be (again, here the East West production excelled).

Turning to the music side. If you’re not dead, you likely know that Pippin has music and lyrics by Stephen Schwartz (and a book by Roger O. Hirson, although no one ever remembers the book writer of Pippin). If you know Pippin, you likely know that there was lots of uncredited tinkering by Bob Fosse, and a well publicized feud between Fosse and Schwartz. With the revival, Schwartz had the last laugh, and it is unclear if some of the changes to the music were the result of restoring cuts that Fosse made that Schwartz liked. As I noted before, I wasn’t that crazy about some of the changes. Modulo that, it was performed and orchestrated well — kudo’s to Larry Hochman. Music supervision and arrangements were by Nadia DiGiallonardo,  with Music Coordination by John Miller and Music Direction by Ryan Cantwell. Cantwell also led the combination touring and local orchestra, which consisted of, well, a whole lotta people who you probably don’t want me to list and link — I count 14 people!

The choreography by Chet Walker (“in the style of Bob Fosse”), assisted by Associate Choreographers Mark Burrell (FB) and Brad Musgrove, in general, worked very well — with the exception noted above of too many “wow” hands or hands to express emotion. Now Fosse was well known for his use of hands and body parts, but I think this was not only in the style of Fosse, but above and beyond. Other than that, the dance integrated well with the circus performances. Speaking of the circus side of things, that was spectacular — and credit goes to Gypsy Snider of Les 7 doigts de la main. In general, the movement — be it circus performance or dance — was just great to watch. Illusions were by Paul Kieve.

Turning to the technical side: the scenic design of Scott Pask was very clever and evoked the circus feel well; this was aided by the costume design of Dominque Lemieux. The sound design of Jonathan Deans and Garth Helm was clear and crisp — a pleasant surprise at the Pantages! The lighting design of Kenneth Posner worked well in creating mood and illuminating the festivities. Jake Bell was the technical supervisor, Mahlon Kruse was the production supervisor, and Bill Schaeffer was the company manager. Tour casting was by Telsey * Company, with original casting by Duncan Stewart and Benton Whitley.

“Pippin” continues at the Pantages through November 9, 2014.

Upcoming Theatre and Concerts:  October currently has one show remaining: Los Angeles Symphonic Winds (FB) at Calabasas High School on 10/26 (followed by the MoTAS Golf Tournament the next day at the Calabasas Country Club). November is back to busy, with “Big Fish” at Musical Theatre West (FB) on Sat 11/1, “Handle with Care” at The Colony Theatre (FB) on Sun 11/9 (shifting to avoid ACSAC and opening night), a trip out to Orange Empire Railway Museum to see my buddy Thomas on 11/11,  “Sherlock Holmes and the Suicide Club” at REP East (FB) on Sat 11/15, the Nottingham Festival on Sun 11/16, and “Kinky Boots” at the Pantages (FB) on Sat 11/29. I may also see some theatre when I visit my daughter Erin in Berkeley between 11/20 and 11/26. Right now, I’ve scheduled “Harvey” at Palo Alto Players (FB) in Palo Alto for Friday 11/21, and I’m looking at “The Immigrant“ at Tabard Theatre (FB) in San Jose, , “Rhinocerous” at the UC Berkeley Theatre Department (FB), or possibly a show at UC Santa Cruz featuring a family friend in the cast or crew. [As a PS on the above: I’m trying to figure out a way to balance “The Immigrant”, the show at Santa Cruz, and Dickens Fair on one weekend. Am I crazy?] As for December, right now I’m just holding one date: “She Loves Me” at Chance Theatre (FB) in Anaheim on 12/20, and we’ll probably go see “Joseph and His Amazing Technicolor Dreamcoat” at Nobel Middle School just before ACSAC. Right now, there is only one show booked for January 2015 – “An Evening with Groucho” at AJU with Frank Ferrente. As always, I’m keeping my eyes open for interesting productions mentioned on sites such as Bitter-Lemons, and Musicals in LA, as well as productions I see on Goldstar, LA Stage Tix, Plays411.