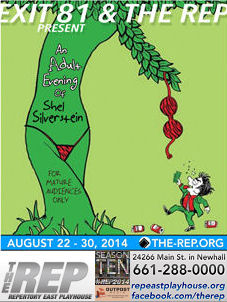 Underneath my outside face
There’s a face that none can see.
A little less smiley,
A little less sure,
But a whole lot more like me.
(Shel Silverstein, “Everything Thing On It“)

My first introduction to Shel Silverstein was through music when I was a teenager, and I didn’t even know it. Songs like “A Boy Named Sue”, “Boa Constrictor”, “Unicorn” and others were all written by Shel Silverstein, and I didn’t know it. Of course, we all knew one Shel Silverstein song, thanks to Dr. Demento. How many of you can recite a few lines, if not the entirety, of “Sarah Cynthia Silvia Stout Would Not Take the Garbage Out”? As I got older, I was introduced to Shel Silverstein’s “The Giving Tree” (despite its mixed messages) and his poetry books. I also discovered the Shel Silverstein wasn’t only a children’s author — he drew numerous cartoons for Playboy (which every teen boy, umm, reads), and if you’ve ever read “The ABZ Book” or looked at “Different Dances“, you know Shel worked at many different levels. So I knew the adult side of Shel, but what I didn’t know was that in addition to being an artist, author, poet, and songwriter, Shel was also a playwright. He wrote loads and loads (from what I’ve read, over 100) of short one-act plays and scenes. In 2001 (after Shel’s death), New York’s Atlantic Theatre Company collected ten of Shel’s more adult one-acts into a two-act production called “An Adult Evening of Shel Silverstein“. The resulting production has been very popular with small theatres around the country; for the last two weekends, Repertory East Playhouse (REP East) (FB) has been presenting it as part of the short-run, more adult fare that they run during late summer. 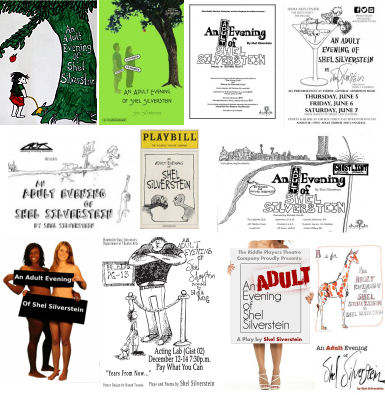 Before I start describing the ten scenes and the performances therein, a few notes from the research I did to write this write-up. As I noted, a lot of theatres have presented this play, and it is interesting to see how they have adapted Shel’s child-oriented artwork to attract the adult market. I’ve captured a few examples to the right. These show that the licensing doesn’t provide an image for the show. The most common image seems to be an adaptation of “The Giving Tree” (his best known work); most seem to imply a heavily sexual nature to the show. Most seem to be designed to discourage children, demonstrating that Shel’s current association is with his children’s books. I’ll note the Playbill in the center is from the original Atlantic production. So how “adult” is this show? Will it scare the horses? There’s a fair amount of adult language in the show, but no actual nudity (there was more nudity on stage in Frankie and Johnny or The Graduate). Although in one scene the language may be a bit raunchy, most of the language is stuff that kids over 12 these days know from the  playground or pay-TV. What is adult in this show are the concepts. There are notions and ideas in this show that will fly right past a child; they won’t see the humor and they won’t get the point. Those familiar with Shel’s adult work know that he used shock and strong images to make significant points about society. It is those ideas that make this show wrong for kids.

So let’s look at the scenes and performances in the show. REP East only listed the scene names, but luckily Dramatists Play Service and Wikipedia provide more information:

Overall, this was a large cast (many of whom are local performers at REP or CTG, as opposed to heavy regulars elsewhere in the LA theatre scene) who were having fun with a short run production. They clearly enjoyed the production, and the direction of Jeff Johnson/FB kept everything running smoothly (it did make more work for me, as I try to find links for every actor, and many took quite a bit of hunting to find anything other than Facebook).

Technically, this was very simple. There was no real set; there were a number of prop pieces used to establish the scenes. Sound design was by Steven “Nanook” Burkholder/FB, who found the few Shel Silverstein CDs out there for interstitial music (I know he used “Freakers at the Freakers Ball”, and I think I heard a few songs from “Inside Folk Songs”). There was no credit for lighting, but I’m guessing REP regular Tim Christianson/FB was involved. “An Adult Evening of Shel Silverstein” was produced by Jeff Johnson/FB, Mikee Schwinn (FB) and Ovington Michael Owston (FB).

Alas, I saw the last performance of “An Adult Evening of Shel Silverstein“. You could get tickets for “The Great Gatsby“, the next production at Repertory East Playhouse (REP East) (FB) [ETA: Which just went up on Goldstar].

Upcoming Theatre and Concerts:  August will end with “An Adult Evening of Shel Silverstein” at REP East (FB). September is filling out. So far, the plans include “Earth/Quaked starring Savion Glover” as part of Muse/ique in Pasadena on Sun 9/7,  “Moon Over Buffalo” (Goldstar) at the GTC in Burbank on Sat 9/13, “Bat Boy: The Musical” at CSUN for the Friday night before Slichot (9/19),  “What I Learned in Paris” at The Colony Theatre (FB) on Sat 9/27, and “The Great Gatsby” at Repertory East (FB) on Sun 9/29. October currently has two shows (three if you count Yom Kippur on 10/4): “Don’t Hug Me, We’re Married” at the Group Rep (FB) on Sat 10/18 (when Karen is at PIQF), and “Pippin” at the Pantages (FB) on 10/25. November is back to busy, with dates held or ticketed for “Big Fish” at Musical Theatre West (FB) on Sat 11/1, “Handle with Care” at The Colony Theatre (FB) on Sat 11/8 (shifting to avoid ACSAC), a trip out to Orange Empire Railway Museum to see my buddy Thomas on 11/11,  “Sherlock Holmes and the Suicide Club” at REP East (FB) on Sat 11/15, the Nottingham Festival on Sun 11/16, and “Kinky Boots” at the Pantages (FB) on Sat 11/29. I’d love to get down to San Diego to see either (or both) of “Bright Star“, the new Steve Martin/Edie Brikell musical, at The Old Globe Theatre (FB) (September 13-November 2), or “The Hunchback of Notre Dame” (based on the Disney film) at The La Jolla Playhouse (FB) (October 25-December 2), but I’m not sure either would work in the schedule.  As for December, right now I’m just holding one date: “She Loves Me” at Chance Theatre (FB) in Anaheim on 12/20. As always, I’m keeping my eyes open for interesting productions mentioned on sites such as Bitter-Lemons, and Musicals in LA, as well as productions I see on Goldstar, LA Stage Tix, Plays411.