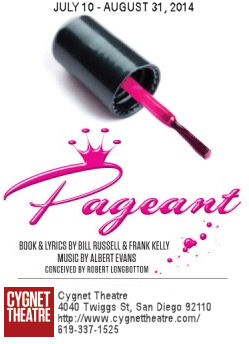 All summer, I’ve been reading about the off-Broadway musical “Pageant“, which has been getting strong reviews. When I started planning our vacation (which, of course, includes investigating the theatre in the area), I discovered that “Pageant” wasn’t only running off-Broadway, it was running off-Los Angeles. Translation: the Cygnet Theatre (FB) in Old Town San Diego was presenting “Pageant“, and it was running during our vacation window. Furthermore, discount tickets were available through San Diego Arts Tix. I booked it, and last night saw us in Old Town watching a bunch of beauty queens on stage… and when I say “queens”… you’ll see…

“Pageant” is a musical about a beauty pageant. Now there aren’t too many musicals focused on that narrow subject; the only other one that comes to mind is Ashman and Hamlisch’s 1986 flop “Smile“, a musicalization of the 1975 Michael Ritchie comedy movie starring Bruce Dern and Barbara Feldon. “Pageant” is much less story driven — there is no overall arc to the characters, there is no character growth, there is no conflict, there is no backstage drama. “Pageant” is simply what it appears to be — a beauty pageant on stage sponsored by a cheezy beauty product company, with the requisite pageant components (opening walk, evening gown competition, swimsuit competition, talent competition, spokes-model competition) all presided over by a swarmy host. So what makes “Pageant” special? First, the winner is not pre-selected but is chosen by audience members.  More importantly, all of the female beauty contestants… are played by men. It is this latter aspect that drives much of the humor of the show. It creates the double entendres, it adds to the cheesy talent portions, it makes the spokes-model portions hilarious. But it is, at its heart, a gimmick. It’s funny, but in a “if you find that sort of thing funny” kind-of way.

If one was to look at “Pageant” without the gender-bending aspect, what would remain? There would still be a fair amount of skewering of the beauty pageant conventions, from the production numbers that make no sense to the warped notions of beauty that beauty product companies promote. There would be the talent competitions that, often, contain little to no talent. There would be the inside jokes that only those familiar with the pageant word (or those that have watched a lot of pageants) would understand. There would also be the music. What there wouldn’t be was… story. As noted earlier, the book by Bill Russell (of “Side Show” fame) and Frank Kelly (of “The Texas Chainsaw Musical“, umm, fame) (conceived by Robert Longbottom) creates very one dimensional characters — really caricatures — of some broad types and leaves it at that. The evangelical bible belt girl. The kooky California girl. The Southern belle. The musicalization (lyrics by the book writers; music by Albert Evans (of “The Texas Chainsaw Musical” and “Nite Club Confidential” fame)) provides cute production numbers, but nothing that sticks with you as you walk out, or that even provides a modicum of character development. In short, I think the skewering of beauty pageant conventions was handled much better in “Smile” — this is really a gimmicky farce, and it is best to go into the show understanding and expecting that farce is what you are going to get.

As for the gimmick itself, I question its use in this day and age. Contrast the two shows we saw this week in San Diego. In “Two Gentlemen of Verona“, we have a women dressing up as a man to pass as a man, not for humor. In Pageant, we have men dressing as women because it is ostensibly funny. After all, it was funny when Alban did it in La Cage, and it was funny when the two leads did it in Sugar, so we’ll just go with the trend. But Sugar (the musicalization of Some Like It Hot) was done in the 1970s; La Cage in the 1980s. This is 2014; it is the era of RuPaul, drag-queen chic, and acceptance of transgendered and gender-changing people. So is this show a relic of when it was written (1991)? Do our contestants need to be as close as possible to real women, or is the joke that they think they look beautiful? Then again, the point could just be that we’re judging too much — as pageants often do — on the superficial features.

When viewed as a flat farce, the show does much better. Perhaps the best judge of the farcical nature of the show was the audience at our show, where the entire front row consisted of contestants/winners from the Royal World Beauty Pageant (FB). These gals were cracking up and laughing throughout the show. Their handlers, however, appeared less amused. Sitting across from us were two women in purple — one who was really enjoying the show, and the other (who may have been the president of the RWI organization) who seemed to go back and forth from enjoyment to a “grumpy cat” look. As for us, there were portions that were laugh out loud funny, and there were portions that made you feel like the audience at “Springtime for Hitler” (i.e., did they really do “that”). In short, I believe this is humor aimed at a particular audience.

After all of this, I guess I should describe the show. As the show opens, we meet our master of ceremonies, Frankie Cavalier, and the Glamouresse Pageant Girls: Miss Industrial Northeast, Miss Bible Belt, Miss West Coast, Miss Deep South, Miss Texas, and Miss Great Plains. Frankie selects 5 audience members as judges. The competition then starts in earnest, with evening gowns (pictured below in the image I grabbed from the Cygnet Press Site). We then go through the talent competition for each of the girls, interspersed (every 2 girls) with a spokes-model pitch of some ridiculous Glamouresse product. After all the talent segments are done, there is another production number done by Frankie Cavalier about the pageant in the future (which has him in a very odd costume with a very large codpiece). This number ends with the girls in their white, one-piece swimsuits for the swimsuit competition, which also provides the opportunity to hear their inner thoughts. Once this is done, the “Miss Congeniality” prize is given and the six girls are down selected to five. There is then a tribute to the outgoing queen (the downselected girl, redressed), and a final competition. This last competition consists of the girls answering questions from the “Glamour Help Line”. At this point, the audience judges are polled to determine 2nd runner up, 1st runner up, and the winner. There is the winner presentation and the closing song, and the show is done. 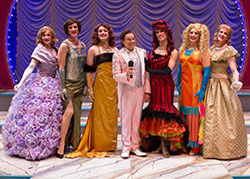 As the swarmy host, Frankie Cavalier, Phil Johnson (FB) did an excellent job, and was hilarious in the Venus 3000 number.

The production was directed and choreographed by James Vasquez (FB), who turned these men into somewhat believable beauty contestants (although my wife felt that RuPaul was needed to get the female mannerisms down right for all but Miss Deep South).  Don Lemaster (FB) was the musical director.

Turning to the technical side: The set design by Sean Fanning (FB) was a suitably glamorous pageant stage with the appropriate amount of shimmer and steps. The lighting design by Michelle Caron (FB) demonstrated very clever use of moving mirror lights — they were used in a manner equivalent to normal movers, which I’ve never seen before. The other lighting worked well to focus attention. General properties were designed by Angelica Ynfante (FB), with the special Glamouress properties designed by Michael McKeon (FB). These were extremely clever — both the talent show props such as the “target” for Miss Texas, to all the wonderful Glamouress products that were demonstrated — the lip gloss food, the double ended aerosol can, the facial powder vacuum, the snap odor eliminators. Costumes were by Shirley Pierson (FB) assisted by Kate Stallons (FB) and Kristine Kerr (FB); makeup and hair was by Peter Herman (FB). The costumes, in general, were cute and clever and served to conceal that which must be concealed if one is a man playing a woman (especially in a swimsuit). Some, such as Cavalier’s Venus 3000 getup, were just inspired (especially the codpiece). Makeup was a little less inspired, simply because these faces were not done up in a manner that preserved the female illusion. Perhaps that was intentional, but sometimes it was over or under done to distraction. The wigs, in general, worked well (at least I couldn’t tell they were obviously wigs). Taylor Wycoff (FB) was the Dramaturg, although I have absolutely no idea what a dramaturg does on an established show like this. Heather M. Brose (FB) was the stage manager, assisted by Marguerite Sugden/FB. Sean Murray (FB) is the Artistic Director of Cygnet.

Dining Notes: You’re in Old Town. There’s tons of reasonable Mexican places at which to eat.

Upcoming Theatre and Concerts:  August will end with “An Adult Evening of Shel Silverstein” at REP East (FB). September is filling out. So far, the plans include “Earth/Quaked starring Savion Glover” as part of Muse/ique in Pasadena on Sun 9/7,  “Moon Over Buffalo” (Goldstar) at the GTC in Burbank on Sat 9/13, “Bat Boy: The Musical” at CSUN for the Friday night before Slichot (9/19), “The Great Gatsby” at Repertory East (FB) on Sun 9/21,  “What I Learned in Paris” at The Colony Theatre (FB) on Sat 9/27. October, so far, only has one show: “Pippin” at the Pantages (FB) on 10/25, although I’m looking at “Don’t Hug Me, We’re Married” at the Group Rep (FB) for either Sat 10/11 or Sat 10/18 (when Karen is at PIQF). November is back to busy, with dates held or ticketed for “Big Fish” at Musical Theatre West (FB) on Sat 11/1, “Handle with Care” at The Colony Theatre (FB) on Sat 11/8 (shifting to avoid ACSAC), a trip out to Orange Empire Railway Museum to see my buddy Thomas on 11/11,  “Sherlock Holmes and the Suicide Club” at REP East (FB) on Sat 11/15, the Nottingham Festival on Sun 11/16, and “Kinky Boots” at the Pantages (FB) on Sat 11/29. I’d love to get down to San Diego to see either (or both) of “Bright Star“, the new Steve Martin/Edie Brikell musical, at The Old Globe Theatre (FB) (September 13-November 2), or “The Hunchback of Notre Dame” (based on the Disney film) at The La Jolla Playhouse (FB) (October 25-December 2), but I’m not sure either would work in the schedule.  As for December, right now I’m just holding one date: “She Loves Me” at Chance Theatre (FB) in Anaheim on 12/20. As always, I’m keeping my eyes open for interesting productions mentioned on sites such as Bitter-Lemons, and Musicals in LA, as well as productions I see on Goldstar, LA Stage Tix, Plays411.