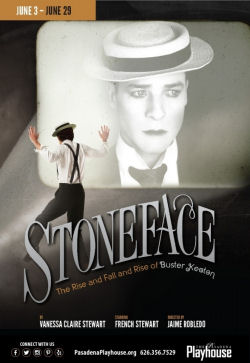 Recently, Carla Laemmle died. She was one of the last living links to the first era of motion pictures — the silent movie era. Most of today’s youth can hardly imagine the impact of these short, black and white, soundless (but for a piano accompaniment) images on the screen, but in their day… they defined and created stars. There were romantic and dramatic stars, but some of the best known were the comedians: Charlie Chaplin, Harold Lloyd, Mabel Norman, Roscoe Arbuckle, and Buster Keaton. Some big stage shows have been made for some — there have been at least two musical version’s of Chaplin’s life story, and Norman’s romance with Mack Sennet was the basis for Mack and Mabel. Others have languished in obscurity. Recently, Sacred Fools Theatre had a well-received production of a play with musical accompaniment about the life of Buster Keaton. This play was written by Vanessa Claire Stewart (FB), as a birthday present for her husband, French Stewart (FB), of 3rd Rock and Mom fame, who has the lead role as Buster Keaton (his idol). For the 2013-2014 season, the Pasadena Playhouse announced a remounting of this show, and it was the only show in their season I found interesting. So guess where I was last night? Yup, we were back at our old haunt, the Pasadena Playhouse, seeing Buster Keaton on screen and stage.

So who is Buster Keaton. Many may remember him from his last role: He played Erroneous in the screen version of “A Funny Thing Happened on the Way to the Forum“. But he is best known for his long string of silent movies with well-timed gags starting in 1917, and he made (on average) at least one movie a year until 1966. But all weren’t successes. He had two unsuccessful marriages and a significant drinking problem that derailed his career in the mid-1930s, and his career limped along until he was rediscovered in the 1950s for the genius that he was. His bio at IMDB makes interesting reading.

“Stoneface” attempts to tell much of Keaton’s life story. It begins with Keaton at his first drug rehab in 1933 when he is with his second wife, Mae. His story is then told in flashbacks: his marriage to Natalie Talmadge (sister of Norma Talmadge), his friendship and professional relationship with Roscoe “Fatty” Arbuckle, his relationship with Joseph Schenck (his producer) and his long line of successful films, the disastrous financial failure of “The General“, the sale of his contract to MGM and his poor relationship with Louis B. Mayer. It also explores his battle with alcoholism, his failure at relationships with his first wife (Natalie) and the loss of his children, and the scandal related to his friend, Roscoe Arbuckle. It shows the period where he had lost his timing and made horrible shorts just to survive. But it also shows his sobering up, his successful relationship with his third (and final) wife, his comeback with Chaplin in 1951’s “Limelight”, and his receiving a special Oscar for his life’s work in comedy. In general, the story worked — although I wish they had mentioned that his final speech actually was at the Oscars, and mentioned his final role in Forum.

The way the production was done was very interesting. There were many scenes that were, essentially, silent movies on stage. There was the occasional projected subtitle, but all the action was silent (often with Keaton’s style of comedy) with piano accompaniment. These scenes were excellent, and Stewart seemed to have quite a bit of fun with them, capturing Keaton’s style quite well. Other scenes were more expositional — conventional scenes in which the story played out. These scenes were a bit more problematic — not because of the writing, but because Stewart seemed a bit off with the occasional line hesitation and restart that impacted his timing. His supporting players, however, were excellent.

This production started at the Sacred Fools Theatre, an under 99-seat venue in Hollywood. At the Playhouse, it was in a 686 seat auditorium. There are those who claim that the production lost something in the transfer to the larger venue. Having not seen it in the smaller venue, I can’t speak to that assessment. I can see, however, how the magic and the performance would have had more oomph in a more intimate venue. I found the production worked at the Playhouse for me; however I think a production like this would be lost at the Ahmanson or Pantages. If it wasn’t for the difficulty in working the scenery, the Colony would be a great venue.

As noted above, French Stewart (FB) had the lead position as Buster Keaton. He captured Keaton’s persona and mannerisms quite well, especially in the silent and physical comedy scenes, but had the occasional line problem in the expositional scenes. Looking at his Facebook, this could be the four-show weekends getting to him; this was near the end of the run. But this does seem to be a character that he really enjoys playing and inhabiting, and it is worth seeing for his performance.

The remaining cast members are strong, but there are some worthy of particular note. Tegan Ashton Cohan (FB), as Natalie Talmadge (as well as part of the ensemble), has an extended sequence with Stewart where she attempts to get him sitting in a chair. The physical comedy in this sequence is spectacular.  There is a similar sequence with Daisy Eagan (FB) as Mae Scriven, his second wife. There is also some good physical comedy with Joe Fria (FB) as the young Buster Keaton; Scott Leggett (FB) is great as Roscoe Arbuckle in the opening sequence of Act II. The rest of the actors handle their roles well, and are remarkable in their interactions with the special effects — in particular, the effect of walking behind a screen and suddenly being in the silent movie. Rounding out the cast were Jake Broder (FB) (Joseph Schenck), Rena Strober (FB) (Norma Talmadge / Eleanor Keaton), Pat Towne (FB) (Louis B. Mayer), Conor Duffy (FB) (Edward Sedgwick / George Jessel), and Guy Picot (FB) (Charlie Chaplin).

The production was directed by Jaime Robledo (FB), who was very clever at providing the production a silent-movie feel, including the aforementioned scenes where the actors go behind a screen and are suddenly in the projected image, or longer scenes that are done entirely as silent movies. These were extremely clever and enjoyable. I’ll note the entire production was helped by the great rinky-tinky piano accompaniment of Ryan Johnson (FB).

This is one show where the technical makes the show. The scenic design of Joel Daavid (FB) was spectacular and truly brought the silent film era of the 1920s to life. This resurrection of the period was aided and abeted by the costumes of Jessica Olson (FB) and the wigs of Jessica Mills (FB). As for the lighting, Jeremy Pivnick (FB) did some things I’ve never seen before, including a moving light on a track in the upper fly space that itself had a moving mirror. The sound by the wonderful Cricket S. Myers (FB) was mostly wonderful — in particular the silent movie projector sound during the projections. However, the music behind Keaton and Arbuckle in the bar scenes was just loud enough to be distracting — in fact, I thought it might be coming from the bar outside. As noted before, projections make this show, and much of the credit goes to Ben Rock (FB) and Anthony Backman (FB) and technical director Brad Enlow. Mike Mahaffey (FB) was the fight director. Susie Walsh was the production stage manager; Hethyr “Red” Verhoef was the stage manager, and Kristen Hammack/FB was the company manager.

The Pasadena Playhouse is promoting their 2014-2015 season, but I’m not biting. The season consists of a variation of “Kiss Me Kate” transporting to the mileau of black vaudeville of the early 20th century (umm, no); “Stop Kiss” by Diana Son, a holiday Panto of Sleeping Beauty, “Two for the Seesaw” by William Gibson, “Pygmalion” by George Bernard Shaw, and Sheldon’s favorite show, “TBD”, which he does every season. Of these, the only one interesting me is “Two for the Seesaw“, and that’s primarily because it is the closest I’ll ever come to seeing the musical “Seesaw“, which was based on that play.

Upcoming Theatre and Concerts:  We finish off June with “I’m Not Just a Comic Genius” at Secret Rose (FB) on June 27. July will be busy: “Ghost” at the Pantages (FB) on 7/5, “Return to the Forbidden Planet” at REP East (FB) the weekend of 7/12, “Once” at the Pantages (FB) on 7/19, “Bye Bye Birdie” at Cabrillo Music Theatre (FB) on 7/26, and “Family Planning” at The Colony Theatre (FB) on 8/2. August then remains quiet as we work around vacations and such (but I’m eyeing a number of productions in Escondido, including “Two Gentlemen of Verona” at the Old Globe, and “Pageant” at the Cygnet in Old Town. What they have at the Welk (“Oklahoma“), Patio Theatre (“Fiddler on the Roof“), and Moonlight Stage (“My Fair Lady“) are all retreads. Things start to get busy again in September and October, with “The Great Gatsby” at REP, “What I Learned in Paris” at the Colony, and “Pippin” at the Pantages. More on that later. As always, I’m keeping my eyes open for interesting productions mentioned on sites such as Bitter-Lemons, and Musicals in LA, as well as productions I see on Goldstar, LA Stage Tix, Plays411.