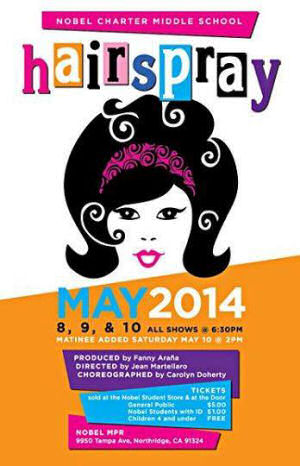 Yesterday was a double theatre day. The first show was at one of our favorite amateur venues: Nobel Charter Middle School. Our daughter went to Nobel; she was involved with their theatre arts program from the beginning of its revitalization about 7 years ago. Since then, we’ve seen this program grow and grow, improving sets, lights, sound. The Spring 2014 production of “Hairspray” was one of their most astounding productions to date. Although not perfect (after all, these are middle school students at a school not dedicated to theatre), the potential talent here was a delight to see.

For those unfamiliar with the story, the musical Hairspray is based on the John Waters film of 1988. The story concerns a “hefty” teenager in Baltimore MD in the early 1960s. Not a stellar student, she lives to dance on the Corny Collins TV show (think “American Bandstand”). She also has no problem with integration, and works to integrate the show… which causes a furor in 1962 Baltimore. This non-musical movie was made into a musical stage production in 2002, with music by Marc Shaiman, lyrics by Scott Wittman and Shaiman and a book by Mark O’Donnell and Thomas Meehan. That production won many Tony awards, and was remade as a movie musical in 2007. You can find the full synopsis here, if by some chance you haven’t seen one of those incarnations. When I first saw the production in 2004 at the Pantages, I thought that this musical would have a long life on the amateur stage (high school). It appears I was right — this month alone there are numerous productions in Los Angeles (in addition to Nobel, the LA Weekly had an ad for a Venice HS production next weekend).

Watching the musical on the Nobel stage, one of the things that struck me were the changes that were made. Part of these changes were due to the fact that Nobel licensed the “Junior” version, which tones down a lot of the sexual innuendo and implications for a more “pure” middle/high-school audience. Examples of these changes were the reworking of lines like “they padded their cups, but I screwed the judges”. Some songs were removed (such as “Big, Blonde, and Beautiful”), and others were either shortened or reworked slightly. These changes I can understand, although the purest in me chafes a bit (and believes that, at least in Los Angeles, the students would understand all of what was cut — perhaps this is more to protect the parent’s impression of their students). The other change was a bit more interesting. During the opening, I noticed they changed “negro days” to “ethnic days”. When I inquired about this change, I discovered that it was made because the program didn’t have enough African-Americans to fill all of those roles. This was discussed in the class, which decided to make the change to “ethnic” (the other word debated was “minority”). I found this a telling observation on LA Unified, as well an interesting teaching opportunity. For those unfamiliar with LA Unified’s history, in the 1970s busing divided the district. There was much white-flight to the valley, who objected to inner-city students being bused to their lily-white districts. Those of us who lived through the era remember the fights that ensured. [As an important aside, I’ll note that the fights were not over Hispanics attending the schools; “inner-city” was a euphemism for blacks]. Magnet schools were created not as an educational quality mechanism, but an integration mechanism: supposedly the programs would be so good they would act as “magnets” to draw minorities voluntarily to the valley, and to draw whites to the inner city. It is a telling reflection of both the effectiveness of magnets, and the changing demographics of Los Angeles and its population,  that the Nobel program had to change to “ethnic”. The second aspect of this was the fact that the historical fights in Baltimore were not over mixed “ethnic” dancing, but specifically black/white dancing. Although there are shows where color-blind casting can work (I’ve heard tell of it being done for “Once on This Island“), there are others where it just breaks the story. I hadn’t realized when I first saw it that “Hairspray” was one of those shows. I shudder to think how this show is tackled in the states on the great plains. Interesting thoughts (and probably ones the rest of the audience didn’t notice).

As I wrote earlier, the performances in this show were just astounding. Most astounding was the lead, a young lady named Janelle Miller, as Tracy Turnblad. For someone so young, she had a powerhouse voice and handled her songs with ease, grace, and fun. She also gave a strong dramatic performance, and seemed to be having a wonderful time with the character. You knew this young lady was great from her first unhesitating notes of “Good Morning, Baltimore”. I hope this young lady goes far in all her endeavors — she has loads of talent.

The rest of the leads weren’t shlumps either. Another strong performer was Alana Gardett DuPre as Little Inez Subbs, who also demonstrated a great singing voice in her numbers, as well as a great performance presence.  Also giving great performances were Matthew Bacon as Link Larkin, Andrzej Krassner-Cybulski as Seaweed Stubbs, Harry Harutyunyan as Wilbur Turnblad, and Morgan Knight as Edna Turnblad. All were very good in their musical numbers, and inhabited their characters quite well. Bacon had a nicely suave performance as Link and handled numbers like “It Takes Two” quite well; similarly Krassner-Cybulski’s handled Seaweed’s number (“Without Love”) well. The Turnblads (Harutyunyan and Knight) did a spectacular job with “(You’re) Timeless to Me”. I do need to make a comment regarding Edna Turnblad, however, completely unrelated to Ms. Knight’s performance (which was great). The traditional casting for Edna is as a man playing a woman, echoing the original casting of Divine in the role (Harvey Fierstein in the stage musical). Casting a woman in the part breaks a number of jokes in the songs, which play up Edna’s non-traditional size and non-traditional looks. It was interesting to see how the effect changed with a lady in the role.

Of the remaining large cast, there are a few additional performances I would like to highlight. The three Dynamites, Aaminah Babatunde-Bey (Judine), Alishia Maghreiva (Kamilah) and Joann Gilliam (Shayna) gave a very strong musical performance; whichever of them did the primary vocal on “I Know Where I’ve Been” was astounding. As the matron, Rose Meyers was a bit hesitant at first, but hit the final notes of “The Big Dollhouse” with surprising power and clarity. Lastly, Frenchy Wane was fun to watch for the enthusiastic way she attacked the role of the gym teacher.

Choreography was by Carolyn Doherty, assisted by Madison Tilner (9th grade) and Ryan Wynott (8th grade), with Harry Harutyunyan, and Leanne Langston as Dance Captains. The dancing was quite good, considering that most of these kids are probably not skilled dancers. Daniel Bellusci (12th grade) as music director, assisted by Iona Della Torre. The music was prerecorded and likely supplied by MTI.

Turning to the technical side: every Nobel production improves upon the previous ones in these areas. From the early days of simple sets and backdrops, just a few lights on overloaded extension cords, and barely audible sound, yesterdays productions was 1000 times better. Professional quality sets were designed by Dennis Kull and constructed by Huan “Papa” Chu, Barrrrrry Borses, and Roman Jariabeck, with significant period props that Nobel has never had before. Artur Cybulski‘s lighting design was spectacular, and I thought I saw a few new LED lights on the stage. This, folks, is where your donation dollars go, so donate if you can. The sound was the best of any Nobel production to date — credit should go to Isaijah Johnson (9th grade) and his sound crew who miked the performers well, tuned the auditorium, and ensured there was no difficulty in hearing people. The costumes by the Nobel Drama Mamas seemed appropriately period.

A special call-out to the folks who did publicity on this one: the poster (designed by Michelle Franks) was one of the best ones yet, providing performance dates, prices, and addresses. Katelyn Bauer also made a wonderful promotional video (follow the link — it really is good). This was the first show that Nobel had formal tickets and prices. This is a good thing, but may have impacted donations. I suggest, for the future, that they raise prices (Venice HS was charging $10 at the door, and Van Nuys has charged $10 in the past, and I think this performance was better than any HS performances), and consider a higher price yet for better seating. To address the fears for the parents of students that cannot afford, vouchers for a discounted “parent price” could be provided. Those who can should consider writing a check to this program — contact Fanny Araña for a donation address or mail a check to the school to her attention.

The production was produced by Fanny Araña and directed by Jean Martellaro (assisted by Harry Harutyunyan (8th grade)). Fanny and Jean have been the cornerstone of this program since its inception. They have inspired hundreds, perhaps thousands, of students with their energy and enthusiasm. They are examples of what teachers should be.

Alas, the last performance of “Hairspray” was last evening.  Keep an eye on Nobel Middle School for an announcement of their Fall 2014 production.

Upcoming Theatre and Concerts:  Following “Hairspray“, we went to Burbank to see “The Lion in Winter” at The Colony Theatre (FB). That write-up will be posted shortly. Next weekend brings both “Porgy and Bess” at the Ahmanson and “Cat on a Hot Tin Roof” at REP East (FB). The next weekend brings the musical “Lil Abner” at LA City College (directed by Bruce Kimmel, with choreography by Kay Cole). The last weekend of May is currently unscheduled: Karen is helping Erin move, and there’s not that much calling to me from Goldstar. June is busy. It starts with a CDF Conference for Karen while I see “The Fantastiks” at Good People Theatre (FB). We lose the following weekend to a Bat Mitzvah. The remainder of the month brings “Stoneface: The Rise and Fall of Buster Keaton” at the Pasadena Playhouse (FB) on June 22, and “I’m Not Just a Comic Genius” at Secret Rose (FB) on June 27. July will be busy: “Ghost” at the Pantages (FB) on 7/5, “Return to the Forbidden Planet” at REP East (FB) the weekend of 7/12, “Once” at the Pantages (FB) on 7/19, “Bye Bye Birdie” at Cabrillo Music Theatre (FB) on 7/26, and “Family Planning” at The Colony Theatre (FB) on 8/2. August then remains quiet as we work around vacations and such, but things start to get busy again in September and October. More on that later. As always, I’m keeping my eyes open for interesting productions mentioned on sites such as Bitter-Lemons, and Musicals in LA, as well as productions I see on Goldstar, LA Stage Tix, Plays411.