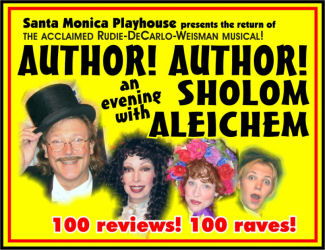 This has been a weekend of Jewish-themed plays. Last night we learned about the Comedian Harmonists during the rise of the Nazis. Today we went a little earlier, learning about Sholom Aleichem, a prominent Yiddish author, playwright, and humors, with “Author! Author! An Evening With Sholom Aleichem” at the Santa Monica Playhouse.

You may know Sholom Aleichem as the author of the short stories about Tevye, the milkman, and his daughters that were the basis for the musical “Fiddler on the Roof“. But Aleichem was much more — writing in Yiddish, he wrote many plays, short stories, young adult stories, and novels. As Mark Twain pointed out, he was the Yiddish Mark Twain (to which Aleichem noted that Twain was wrong — Twain was the English Sholom Aleichem!) We picked this play because our daughter, Erin, has been studying Yiddish at UC Berkely, and it seemed to nicely dovetail with her studies.

I’ll note that Author! Author! is a perennial production at Santa Monica Playhouse. It premiered there in 1976 as part of their Jewish Heritage series, and had a 4½ year run. It was revived for the theatre’s 54th year (and the musical’s 36th), and features its original stars in the lead roles. Translation: This is a cast where the leads know the roles pat — these are clearly characters that they love to personify. That shows in many ways: with their level of comfort, with there ability to speak in character seemingly off the cuff, with their warmth and humor. Note that the pictures in the promotional material are from, shall we say, earlier in the run :-).

The storyline is simple. It starts with Sholom Aleichem starting to read his last will and testament, and quickly he flashes back to his visit to America. He tells the story of his arrival and meeting the newsman woman Hannah Green. The remainder of the play is Aleichem telling various stories to illustrate his life and philosophy. These stories range from well-known locals such as Chelm, to stories about parents and children, to stories about America. Some are touching; most are funny. There were a few that I particularly liked and particularly stand out in my memory. The first was the story of the restaurant, where Aleichem goes to eat in a restaurant that seemingly provides no service. The second was a touching love story between Aleichem and the Cantor’s daughter (more on that story in a minute). I think my favorite story, however, was the story of two Jews on a train, both attempting to be more assimilated than the other, not realizing, until the slip of a Yiddish idiom, that both were Jewish.

However, Author! Author! is more than a simple comedic telling of stories. It is a simple musical. The basic book by Eveyln Rudie (FB) and Chris DeCarlo, based on the writings and letters of Sholom Aleichem, was augmented with music by Ben Weisman and lyrics by the book author, Eveyln Rudie (FB). Most of the songs are cute and not particularly memorable (although I’m surprised a cast album has never been recorded, given the history of the show — it might be a nice fundraiser). They do, however, provide a nice energy for the show. I was particularly taken with one song — the song supporting the “It All Depends” scene that illustrated how different people have different points of view. It was touching and clever and well performed.

The show does have a bit of minor audience participation (or at least I’m guessing that’s what it is): they tend to get the names of the folks in the front row, and then mention them a few times during the show. I know this because, alas, I was sitting in the front row. If any of the folks from Author! Author! are reading this, I’m the “Daniel and his family” that you welcomed this afternoon :-).

As I noted, the lead performers are very comfortable with their roles, so the direction by Arthur R. Tompkins seems to blend into the performances seamlessly. This is especially true for Chris DeCarlo as Sholom Aleichem and Eveyln Rudie (FB) as Hannah Green. DeCarlo has aged well into his Aleichem role — he seems to fit into the older Aleichem like a well-worn comfortable shoe, and the twinkle in his demeanor erases his age when he plays his younger self or a younger character. Rudie works equally well as Green (and as various other characters) — I particularly enjoyed the visual interplay and obvious affection between the two actors (who are husband and wife in real life) during the Cantor’s daughter number.

Supporting the leaders were a number of talented Santa Monica Playhouse regulars (I say that because we haven’t seen them anywhere else :-)), including Kate Burleigh (FB) (Deborah, Mrs. Goldstein), Rachel Galper (FB) (Basha, Rebecca, Mrs. Schnippelbubbel), Alejandra Nunez (Lipschele, Dorothy), and (for our performance), Nima Ghassemian (FB) (Albert Jacob Nussbaum) [alternating with Graham Sibert/FB]. All were good singers and effective in their roles. I particularly enjoyed Galper in the aforementioned Cantor’s daughter number — she just seemed to be enjoying herself so much in the role. Ghassemian was strong in a number of scenes — particularly in the “Two Anti-Semites” scene and “The Miser and the Thief”, as well as the Chelm stories.

The choreography by Cydne Moore worked well for the limited space and the nature of the music (this isn’t a major dance show, folks). The music was orchestrated by Linn Yamaha-Hirschman, and was pre-recorded. I always miss live music, but understand the economic constraints.

The simple set by James Cooper worked well — there was a writing desk and various hats on the side, and simple cubes on the stage that suggested the various locales vaguely. Some venues go for realistic sets, and some ask the audience to use their imagination. I’m fine with either. The lighting, also by James Cooper, was simple and effective. The sound by The Attic Room was primarily some background sound effects that worked well. What didn’t work well — at least for me — were many of the costume selections by Ashley Hayes. Although they were beautiful, they didn’t (for the most part) fit my understanding of what was being worn in either turn of the century America or in the shetls that Aleichem was writing about. They struck me more as costumes out of Dickens-era London upperclass. However, they didn’t serve to detract from the show — they were just more anachronistic. George J. Vennes III served as production stage manager. I’ll note most of the actor and technical links go to the theatre staff page — this seems to be a repertory company that stays within itself — although they do television, you don’t see these folks moving a lot between other theatres (as seems to be common in the LA Theatre community).

“Author! Author! An Evening with Sholom Aleichem” plays one more weekend, March 29-30. Call the Box Office at 310.394.9779 ext 1 to reserve tickets, or visit their online ticketing.

Upcoming Theatre and Concerts:  Next weekend is open, and will likely stay that way as we’ll be exhausted. April starts with “In The Heights” at Cabrillo Music Theatre (FB) on April 5, and should also bring “Tallest Tree” at the Mark Taper Forum on April 12. The following weekend brings a benefit at REP East (FB): “A Night at the Rock Opera“. The last weekend of April will bring Noel Paul Stookey at McCabes, as well as the Southern California Renaissance Faire. Current planning for May shows “The Lion in Winter” at The Colony Theatre (FB), and “Cat on a Hot Tin Roof” at REP East (FB), as well as “Hairspray” at Nobel Middle School. I may also be scheduling “Porgy and Bess” at the Ahmanson. June is mostly open pending scheduling of an MRJ meeting, but I will try to fit in as much of the Hollywood Fringe Festival as I can. As always, I’m keeping my eyes open for interesting productions mentioned on sites such as Bitter-Lemons, and Musicals in LA, as well as productions I see on Goldstar, LA Stage Tix, Plays411.