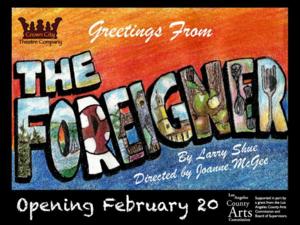 If you had asked me a few weeks ago what show I was seeing the last weekend of February, I would have told you “The Real Thing” by Tom Stoppard, at Two Roads Theatre. But I had gotten those tickets based on the strength of the author — once I read the reviews of the actual production… in particular the review of M.R. Hunter… I began to get nervous. Luckily, I’m at a level with Goldstar where I can cancel tickets without penalty. So I did, and I replaced it with another show that had a good reputation with a company that I know does great work. That show was Larry Shue‘s “The Foreigner“, and the company was Crown City Theatre (FB) in North Hollywood. The production was well worth braving the sorely-needed torrential rains to go see.

“The Foreigner” is, in many ways, a farce — it depends on good timing, good performances, and misunderstandings that the audience is clued into but the people on stage are not. The setup of “The Foreigner” is simple. Froggy LeSueur is a British demolitions expert who sometimes runs training sessions at military installation near a fishing lodge in rural Georgia. His best friend, Charlie Baker needs to get away from his situation at home where his wife (who pathologically cheats on him, but whom he loves dearly) is on her deathbed. So Froggy brings Charlie with him to Georgia to spend a few days at the fishing lodge. The problem is that Charlie (a proofreader for science-fiction magazines) is pathologically shy and is terrified at the prospect of having to converse with strangers at the lodge for three days. To help his friend, Froggy tells Betty, the owner of the lodge, that Charlie is from an exotic foreign country and neither speaks nor understands English.

Charlie doesn’t want to go along with this, but when people start talking around him as if he isn’t there, he starts to play along. He soon learns the situation at the lodge: Catherine is staying there with her fiancee, Rev. David, and her dim-witted brother, Ellard. Catherine has inherited lots of money, and David wants to get all that money and the lodge. He has been plotting with Owen, the county inspector, to have the lodge condemned. He’ll then marry Katherine, buy the lodge, and recreate the Georgia Empire of the KKK. Catherine knows nothing about this. While learning this, Charlie grows into his role, including pretending to learn English under the training of Ellard. He uses his broken English to goad both Owen and David, with the net result that the Klan sets their eyes on the foreigner, Charlie, and sees an easy way to gain the lodge. The second act is how Charlie foils the KKK attack — and I won’t spoil that for you as it is hilarous.

The performances in this were supurb under the seamless direction of Joanne McGee (FB). I particularly enjoyed watching the actors who were not the focus on the scene reacting — you could tell they were having fun with this show. In the lead position, as “the foreigner” Charlie Baker, was Brian Graves (FB). Graves had this mischievous streak in him that just shone through in the performance; this playfulness worked well. He was so natural with this role that I began to wonder if there was some measure of improvisation going on. His buddy, Froggy, was played by David Ghilardi (FB); Ghilardi had an equal measure of playfulness in his scenes — especially in the final scene.

The actors behind the folks at the lodge were equally talented: Nan Tepper (FB) as Betty, Kelly Huddleston (FB) as Catherine; Adam Simon Krist (FB) as Ellard, and Jacob C. Head (FB) (Rev. David). Rounding out the main players was Ian Patrick Williams (FB) as Owen. We’ve seen Tepper before at REP East; she was very good playing the bufuddled owner of the lodge. I truly enjoyed watching Huddleston’s Catherine — I was unsure in her first few scenes, but as the production went on I loved how she got into the character, got playful, and was having fun with Graves’ Charlie. Krist was appropriately energetic and yet slow as Ellard, and Head and Williams provided the appropriate element of evil. Rounding out the cast as the KKK members for one scene were some combination of: Richard Kray, Stephen R. Peluso, Derek T. May, Mark Leland, Ivone Reyes, James Hall, Orion McCabe, Jade Rosenberg, David Yukon, Sarah Keller, Stephanie Green, Michele Mahone Kwas, London May, and Amy D. Higgins.

The set design by Joanne McGee (FB) was appropriately lodge-ly and kitschy — I particularly appreciated the three Billy Bass mounted on the stage, and the effort to find a dial phone. Prop Design was by Keiko Moreno (FB). I also noticed the excellent sound design of Nikko Tsiotsias — this was especially apparent in the opening scenes with the car sounds and the rain. Also excellent was the lighting design of Anna Cecelia Martin, particularly with the creation of the headlight effect. Rounding out the technical and creative credits are: Tanya Apuya (Costume Designer), Zad Potter (Stage Manager), Oriana Havlicek (House and Literary Manager), and Gary Lamb/FB (Executive Producer, Technical Director, Co-Artistic Director) and William A. Reilly/FB (Producer/Co-Artistic Director).

Larry Shue’s “The Foreigner” continues at Crown City Theatre (FB) through at least March 30 (and Crown City often extends their shows). You can get tickets through Brown Paper Tix here. Discount tickets may be available through Goldstar, LA Stage Tix, or Plays411. If it was worth braving the rain for, imagine the strength of a recommendation for a sunny day.

Upcoming Theatre and Concerts:  Tonight brings the MRJ Regional Man of the Year dinner at Temple Beth Hillel, followed by “Sex and Education” at The Colony Theatre (FB) on Sunday March 2 (moved from March 8). The weekend of March 8 now brings “Biloxi Blues” at REP East (FB) (moved from March 29). The weekend of March 16 brings Purim Schpiels, with Sunday afternoon bringing “Inherit the Wind” at the Grove Theatre Center (FB) in Burbank. March 22 brings “Harmony” at The Ahmanson Theatre (FB), followed by “Author, Author: An Evening with Sholom Aleichem” at the Santa Monica Playhouse (FB) on March 23. The last weekend of March is open, and will likely stay that way as we’ll be exhausted. April starts with “In The Heights” at Cabrillo Music Theatre (FB) on April 5, and should also bring “Tallest Tree” at the Mark Taper Forum, as well as the Southern California Renaissance Faire. April may also bring “My Name is Asher Lev” at the Fountain Theatre (FB) (as this runs through April 19). Current planning for May shows “The Lion in Winter” at The Colony Theatre (FB), and “Cat on a Hot Tin Roof” at REP East (FB). As always, I’m keeping my eyes open for interesting productions mentioned on sites such as Bitter-Lemons, and Musicals in LA, as well as productions I see on Goldstar, LA Stage Tix, Plays411.

One Reply to “Damn Furriners”