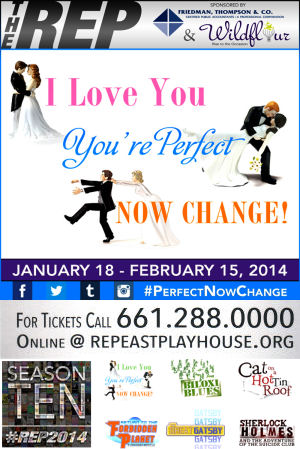 This is a relationship weekend. I talked about congregational relationships Friday night at the Men’s Club Shabbat; I’ve been thinking about our theatre subscription relationships with Cabrillo; and last night I saw a musical (“I Love You, You’re Perfect, Now Change“) that focuses on relationships. To be precise, I saw a musical about relationships for the second time — for back in 2006, we had just discovered Repertory East Playhouse (FB). The second production we ever saw there, in March 2006, was “I Love You, You’re Perfect, Now Change“, and it cemented our relationship with this theatre as a place we wanted to be.  [I’ll note that back in 2006, “I Love You…” was followed shortly thereafter by “Forever Plaid” at Cabrillo Music Theatre (FB); and this year, we’re seeing “Forever Plaid” at Cabrillo Music Theatre (FB) two weeks after “I Love You…“. Aren’t coincidences grand?]

“I Love You, You’re Perfect, Now Change” (book and lyrics by Joe DiPietro (FB), music by Jimmy Roberts (FB)) is a series of vignettes that, over the course of the show, trace relationships from the first date to senior-citizen relationships. Starting with the dating process, we see the trials and tribulations of trying to find the right person, and the seemingly endless progression of wrong people that are tried and discarded along the way. Essentially, the entire first act is focused on this search, concluding with the wedding vows. Along the way, the continual questions seems to be: “Why am I doing this?” and “What am I getting into?”. The second act focuses on the post-marriage relationships: the problems of the bridesmaid, how marriage and children affect the relationship. Most importantly, the second act focuses on the maturation of relationships — moving away from the frenzied desire to find perfection in a partner to the acceptance of what real love is and the value of companionship.

The musical has no continuing characters, and there is not a traditional storyline. The four actors (two men, two women) portray a variety of characters over the various scenes, with the focus being the message and not the growth of any individual character. Even though I’ve seen the show before and am well acquainted with the music, I still found myself being touched by the story. I think this is because that, as you move through life, different scenes reach out to you in different ways. Back in 2006, I resonated more with the “Marriage Tango” and the “Highway of Love” songs; today, I’m more in the “Shouldn’t I Be Less In Love With You” area. I think everyone will find something that resonates with them in this musical. That was certainly true if you listened to the audience reaction to this: although there was continual laughter, you could tell from where the laughter was that difference scenes were speaking to different people.

The performers in this show: Stephanie Fredricks (FB) (Woman I), Renee Cohen (FB) (Woman 2), Tim Hearl (FB) (Man 1), and Jason Peter Kennedy (FB) (Man 2), were very strong. I was blown away by the power in the singing voices of both Stephanie and Renee; the songs for the men didn’t provide as much opportunity for power, but their voices were equally pleasant. I still have some particular numbers in this show that I absolutely love — my favorite being “Always a Bridesmaid”. I’m pleased to say that Stephanie Fredricks (FB) hit it out of the park with that number, giving an absolutely spot-on performance on top of the song. Brava! Another other notable vocal performance was in “Single Man Drought”.

But in addition to the singing, I just loved the performances themselves. They were touching, comic, and just a delight to watch. I particularly remember the gentle interaction between the actors in “Shouldn’t I Be Less In Love With You?” (there was just some small facial gestures and movements that just made this scene perfect), the touching nature of “I Can Live With That”, the comic use of the bear in “The Baby Song”, the humorous charactures in “A Stud and a Baby” and “Hey There Single Gal”. In general — this is just a fun show, with great performance and very tender movements.

“I Love You…” was directed by Richard Van Slyke (FB), with vocal direction by Virginia Stewart (FB). Choreography was by Samantha Whidby (FB). As always, I can never separate where the director ends and the actor begins, which typically means that both are strong. This directoral team brought out strong performances in the actors that were believable and touching, and yet still conveyed the fun that the actors were having with the role. As I noted before, the singing was very good, and the movement was effective for the REP space. The main drawback was that the music was recorded (my write-up in 2006 shows they had a keyboard player back then). I still prefer live music, and I hope that one day in the future REP can figure out how to work their limited space to add live music to the mix.

No credit is provided for the set design, which was very simple (a number of risers, some partially outlined framed spaces) but which worked very well for this show. Costumes were designed by Erin Rivlin (FB) and worked reasonably well (although the wedding dress could use a little adjustment). As always, the lighting design was by Tim Christianson/FB, and the sound design was by Steven “Nanook” Burkholder/FB. J. T. Centonze (FB) (in his utilikilt) was the stage manager and coordinated the props. Print and video designs were by Mikee Schwinn/FB. “I Love You…” was produced by Ovington Michael Owston (FB).

“I Love You, You’re Perfect, Now Change” continues at Repertory East Playhouse (FB) through February 15. It is well worth seeing. Tickets are available through the REP Online Box office, and may be available from Goldstar (be careful not to confuse it with the production in North Hollywood at Crown City, which closes this week) and the 25Score Card. I’ll note that REP appears to have a new domain name, the-rep.org, but it just seems to redirect to the main site, repeastplayhouse.org.

Upcoming Theatre and Concerts:  Next weekend takes us to Downtown LA, where we’re seeing “Vanya and Sonya and Masha and Spike” at the Mark Taper Forum. February 8 will bring “Forever Plaid” at Cabrillo Music Theatre (FB). The following weekend brings Lysistrata Jones at The Chance Theatre (FB) in Anaheim on February 16. The next weekend, February 22, is currently open — I’m hoping to get tickets for “Discord: The Gospel According to Jefferson, Dickens, and Tolstoy” (LA Stage Tix) at the No Ho Arts Center; other possibilities are “On The Money” at the Victory Theatre Center (FB); “Above the Fold” at the Pasadena Playhouse (FB); or “My Name is Asher Lev” at the Fountain Theatre (FB) (as this runs through April 19, this might be good for mid-March or April), or something else that hasn’t caught my attention yet. I may wait to see what else shows up on Goldstar. The last day of February sees us in Studio City at Two Roads Theatre for Tom Stoppard’s “The Real Thing“, followed the next evening by the MRJ Regional Man of the Year dinner at Temple Beth Hillel. March theatre starts with “Sex and Education” at The Colony Theatre (FB) on March 8.  (this might be good for March 16); The weekend of March 16 brings Purim Schpiels, with Sunday afternoon bringing “Inherit the Wind” at the Grove Theatre Center (FB) in Burbank. March 22 is being held for “Harmony” at The Ahmanson Theatre (FB). March concludes with “Biloxi Blues” at REP East (FB) on March 29. April will start with “In The Heights” at Cabrillo Music Theatre (FB) on April 5, and should also bring “Tallest Tree” at the Mark Taper Forum, as well as the Southern California Renaissance Faire. As always, I’m keeping my eyes open for interesting productions mentioned on sites such as Bitter-Lemons, Musicals in LA and LA Stage Times, as well as productions I see on Goldstar, LA Stage Tix, Plays411.