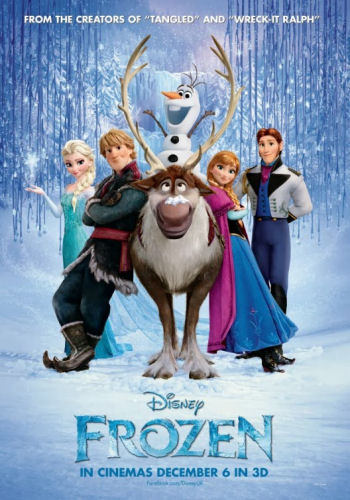 From the moment it opened, I’ve been hearing good things about the new Disney animated movie, “Frozen“. So good, in fact, that I’ve been eager to see it; alas, my schedule didn’t permit me to do so. However, this afternoon was clear, and so we snuck out for a Sunday matinee to see “Frozen“.

From the opening sequences of the opening short animation, it was clear that this was not the Disney of yore. After all, since when would Disney put up a classic Mickey Mouse cartoon, in the 1930s style, before a movie. This was the Mickey of the Steamboat Willie days. But then, something strange happened — this Mickey came out of the screen into CGI-animated form, and kept interacting back and forth with the traditional form, playing and experimenting and pushing the medium to its limits. This was a clear shot across the bow: Disney is back, and they were taking no prisoners.

This brought us to the main feature: Frozen. On the surface, this was a Disney princess story, drawn from Hans Christian Anderson no less. A fairy tale, so to speak. But where was the typical Disney setup? After all, both parents were present, loving, and not evil. Instead, we have two loving sisters that circumstances push apart.

During the story, things keep happening that set up traditional expectations… and breaking them. There’s a cute animal sidekick — that doesn’t talk. There’s a proposal of marriage from a prince — that never turns into a marriage. Most oddly, for all the emphasis on “true love’s kiss” (who didn’t have that song from “Enchanted” running through their head), the story did not end with true love’s kiss saving the day. Instead, it was an act of bravery by a female heroine. How non-typical Disney!

That’s not to say there wasn’t the typical Disney. Both female heroines were of the typical Princess built, and there were no other strong female characters. There was the typical comic relief sidekick. You can’t get everything.

There’s a lot to like in this movie. First, the animation was spectacular. Realistic where appropriate, yet achieving beautiful effects that are only possible with animation.  In short, the visual sequences were breathtaking. Most of the people were animated well — at least the principles. I certainly appreciated the attention to detail in both princesses, Kristof, and the Reindeer.

Second, Disney finally returned to getting the music right. By this I mean that there was a period after Mulan where the music was no longer integrated with the story — there were songs, but they were in the background during action sequences. Frozen returned to the classic musical form — well-written songs that were sung by the characters and that moved the story forward. There’s a reason why Disney is exploring bringing Frozen to the stage — because it was designed with that structure (although I still want them to adapt Pixar’s Up).

Third, the vocal talent was strong — particularly the leads of Idina Menzel and Kristen Bell. It is hard to talk about performances, as all the voice actor can deal with is vocal inflections, but both really got the tone right. The other vocal performances were quite strong as well.

What was weak? There were quite a few sequences that were too strongly designed for 3D — and glaringly obvious in a 2D theatre. There were some points where I felt like I was on a theme park ride — I can imagine some of the snow sequences translating directly into a coaster at a Disney park. The trolls were a little too cutesy for my taste. I also felt some of the visual sequences (especially during songs) traveled too great a distance (which will create a problem for the eventual staging).

In short, there’s a reason folks are saying that this one is different — that this one marks a turning point on the Disney side. I tend to agree, and it is clear they have been moving this direction since Tangled (I’ll note that I haven’t yet seen Wreck-It Ralph, and that I think Tangled was the first fully CGI-animated Disney movie of this variety (ETA: it was the first CGI animated Princess movie; the first CGI Disney feature was Chicken Little); The Princess and the Frog (which I liked) was traditional animation). I hope that the box-office and musical success of this encourages Disney to continue with this new direction — and perhaps explore some classic stories in other cultures so as to spread the empowerment.

[Note: Being a movie, I don’t feel I need to list all the credits or vocal actors — you can get that from IMDB]

We had the following previews at this showing:

Upcoming Theatre and Concerts:  Next weekend, January 25, brings the first show of the REP East (FB) 10th season: “I Love You, You’re Perfect, Now Change“ (which we last saw at REP in 2006). February 1 brings  “Vanya and Sonya and Masha and Spike” at the Mark Taper Forum. February 8 will bring “Forever Plaid” at Cabrillo Music Theatre (FB). The following weekend brings Lysistrata Jones at The Chance Theatre (FB) in Anaheim on February 16. The next weekend, February 22, is currently open — I’m trying to decide between “Discord: The Gospel According to Jefferson, Dickens, and Tolstoy” (LA Stage Tix) at the No Ho Arts Center; “On The Money” at the Victory Theatre Center (FB); “Above the Fold” at the Pasadena Playhouse (FB); “My Name is Asher Lev” at the Fountain Theatre (FB) (as this runs through April 19, this might be good for mid-March or April), “Inherit the Wind” at the Grove Theatre Center (FB) in Burbank (this might be good for March 16); or something else that hasn’t caught my attention yet. I may wait to see what else shows up on Goldstar. The last day of February sees us in Studio City at Two Roads Theatre for Tom Stoppard’s “The Real Thing“, followed the next evening by the MRJ Regional Man of the Year dinner at Temple Beth Hillel. March theatre starts with “Sex and Education” at The Colony Theatre (FB) on March 8. The weekend of March 15 is open, but will likely be taken up with Purim Schpiels (although I might do theatre on Sunday, March 16). March 22 is being held for “Harmony” at The Ahmanson Theatre (FB). March concludes with “Biloxi Blues” at REP East (FB) on March 29. April will start with “In The Heights” at Cabrillo Music Theatre (FB) on April 5, and should also bring “Tallest Tree” at the Mark Taper Forum, as well as the Southern California Renaissance Faire. As always, I’m keeping my eyes open for interesting productions mentioned on sites such as Bitter-Lemons, Musicals in LA and LA Stage Times, as well as productions I see on Goldstar, LA Stage Tix, Plays411.

2 Replies to “A Change of Season at Disney”