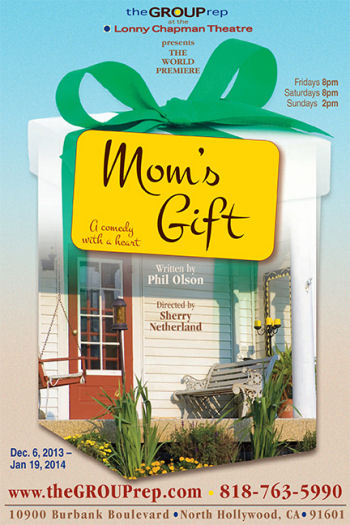 Dealing with family isn’t easy in the best of circumstances. It is even harder in trying circumstances — such as when you have issues with family members and are forced to be with them. But, boy, does it make for a good play. That’s the underlying notion behind “Mom’s Gift“, the touching family comedy that we saw last night at the The Group Rep (FB) at the Lonny Chapman Theatre.

“Mom’s Gift“, written by Phil Olson (FB) of the “Don’t Hug Me…” musicals fame, tells the story of the Swensen family about 7 months after the death of the mother of the family, Peg. Peg died of head injuries sustained in an auto accident due to a drunk driver: she recovered for a while and had home health care, but then had a subdural hematoma, when into a coma, became brain dead, and the father turned off the machine. The story centers on Kat Swensen, the 30-ish older daughter, who comes back home for her father’s birthday party as part of court-ordered anger management therapy. Kat is angry at her father for never being there for her, and her anger increases when she sees her father has removed all pictures of her mother from the house. Kat arrives home, and in short order is greeted by… her dead mother’s ghost. Her mother has to complete some sort of mission — which she doesn’t know — in order to get into heaven (or whatever Lutherans believe — this is Minnesota, after all). None of this makes sense to Kat, who is a civil engineer who designs water treatment plants for people in impoverished countries.

In short order, we meet the other members of the family — Kat’s 15-year younger sister, Brittney, who is a Hooters Girl (for good reason) and still living at home, and Kat’s father, a retired physician, who is ready to move on with his life. We also meet Trish, the women who took care of Kat’s mom at the end of her life, and who recently reconnected with Kat’s father (and who Kat’s father has been seeing on a regular basis). We also meet Kevin, the “boy next door”, who is seeming interested in Kat. Kat’s mom decides throughout all this that she has multiple possible missions, and that Kat needs to help her with all of them: reconciling Kat with her father, getting Kat together with Kevin, breaking up Kat’s dad and Trish, and breaking up Brittney with her ex-con janitor boyfriend, Manson. The problem? Kat seemingly has no interest in forming any relationships; she’s pissed at her dad for seemingly abandoning her mother, and abandoning her quickly for her caregiver; and she just doesn’t understand or relate to her younger sister, who she views as stupid. Kat has no interest in furthering any of her mother’s missions. The first act of the play basically sets up all these situations in a very funny fashion; the second act brings them to a head and then resolves them, but with numerous plot twists that I shan’t divulge.

I found this play to be wonderful. There were numerous laugh-out-loud moments, and I related to both the issues of the engineer and the relationship problems with mothers. It didn’t seem to fall into stereotypical Lutheran mother situations, or become sitcom-ish. Even better, however, were the twists in the second act. I was set up by the writer to see different twists, so the twists that arrived were a true surprise and worked quite well. The ultimate resolution of the story was quite touching, and even brought a little dampness to the eyes. In short, I was very impressed by the writing that brought this together — it demonstrated (yet again) that a well-written story is the heart of great theatre.

Supporting this story was the excellent acting team, under the direction of Sherry Netherland (FB). As usual, I have difficulty seeing the invisible hand of the director (e.g., separating where the actor starts and the direction begins). Still, I believe the directoral hand here is what made this family come across as a real family — you could see these people growing up and working together — there was a genuine affection that just came across through little movements and such. This family and their interactions were well a well-oiled (and well-performed) machine.

The acting team was also great — I particularly noted the little things across all the actors. Facial gestures. Little movements. Actions and reactions. These players seemed to enjoy and inhabit these characters, and really brought them to life. This ensemble behavior deserves acknowledgement above and beyond my comments about the individual members of the team.

As for the actors themselves: In the lead positions were Gina Yates (FB) as Kat and Julia Silverman (FB) as Mom. Yates’ Kat struck the right nerve between emotional angry wreck and the calculating engineer who doesn’t want to deal with these messy personal problems and would rather run away to work. Both she and Silverman’s Mom were just delights to watch — playing off of each other, having wonderful facial reactions, communicating through movement and attitude as well as the written script. Most importantly, they were believable as a mother-daughter pair through their interplay.

In the primary supporting roles were Trisha Hershberger (FB) as Brittney and Patrick Skelton as Dad. Hershberger’s Brittney did a wonderful job of portraying a young woman whose talents were not in her head but in other parts; this made the act two revelations even better. Excellent, excellent performance. Skelton’s father had a wonderful warmth to him that was immediately likable — so much so that you believed you had seen him before even though you probably hadn’t. But Skelton also had the ability to give hints of the underlying pain beneath that façade. Well-played.

In the secondary supporting roles were Lisa McGee-Mann (FB) as Trish and Cyrus Alexander as Kevin. McGee-Mann’s Trish was purely likable, yet gave the impression she was hiding something through the little things she did and her little evasions. The actress was great at perpetuating the misdirections. Alexander’s Kevin was also wonderfully likable with great reactions — you could see the chemistry between Alexander and the other cast mates. Again, wonderful to watch. Rounding out the cast in a vocal-only performance was Laura Coker (FB) as Mrs. Norquist. Other cast members, who were not on stage at this performance, were Saratoga Ballantine (FB) (Understudy-Mom); Paul Cady (FB) (Understudy-Kevin); Joy Darash (FB) (Understudy-Brittney); Pascale Gigon (FB) (Understudy-Trish); Jennifer Ross (FB) (Understudy-Kat); and Chris Winfield (FB) (Alternate-Dad).

Turning to the technical side: The set for the production, designed by Chris Winfield (FB), was a simple but effective house setting (in fact, it was reworked from the previous production, “Awake and Sing“, through reconstruction of the side-rooms into a porch). The sound design by Steve Shaw/FB, who was also the assistant director, was effective and unnoticable. The lighting design by Sabrina Beattie was effective and natural, directing attention where it was needed and establishing the mood well. The costumes were by Lynda Pyka (FB), and appeared to fit the characters well (although Kat’s dress appeared to be an uncomfortable look for her, but I think that was the intention). Brit Chichester (FB) was the stage manager and technical director. “Mom’s Gift” was produced by Laura Coker (FB).

“Mom’s Gift” was supposed to close with this afternoon’s performance, but it has been extended until February 2. If you can get tickets, it is well worth seeing.  Tickets are available through The Group Rep, and discount tickets may be available through Goldstar, LA Stage Tix, or Plays411. Following “Mom’s Gift” at The Group Rep (FB) will be “Boeing Boeing” (February 28-April 12), which is a very funny French sex farce (we saw it at REP East (FB)); that will be followed by “The Ghost of Gershwin” (April 25-June 8). “Mom’s Gift” was the second show we’ve seen at The Group Rep (FB), and we’re very impressed with the company. They remind us a lot of our favorite small theatre, REP East (FB) in Newhall; if we weren’t already at our subscription max we would consider subscribing based on what we’ve seen. As it is, we’ll keep an eye on this company and come back whenever we can.

Upcoming Theatre and Concerts:  Next weekend, January 25, brings the first show of the REP East (FB) 10th season: “I Love You, You’re Perfect, Now Change“ (which we last saw at REP in 2006). February 1 brings  “Vanya and Sonya and Masha and Spike” at the Mark Taper Forum. February 8 will bring “Forever Plaid” at Cabrillo Music Theatre (FB). The following weekend brings Lysistrata Jones at The Chance Theatre (FB) in Anaheim on February 16. The next weekend, February 22, is currently open — I’m trying to decide between “Discord: The Gospel According to Jefferson, Dickens, and Tolstoy” (LA Stage Tix) at the No Ho Arts Center; “On The Money” at the Victory Theatre Center (FB); “Above the Fold” at the Pasadena Playhouse (FB); “My Name is Asher Lev” at the Fountain Theatre (FB) (as this runs through April 19, this might be good for mid-March or April), “Inherit the Wind” at the Grove Theatre Center (FB) in Burbank (this might be good for March 16); or something else that hasn’t caught my attention yet. I may wait to see what else shows up on Goldstar. The last day of February sees us in Studio City at Two Roads Theatre for Tom Stoppard’s “The Real Thing“, followed the next evening by the MRJ Regional Man of the Year dinner at Temple Beth Hillel. March theatre starts with “Sex and Education” at The Colony Theatre (FB) on March 8. The weekend of March 15 is open, but will likely be taken up with Purim Schpiels (although I might do theatre on Sunday, March 16). March 22 is being held for “Harmony” at The Ahmanson Theatre (FB). March concludes with “Biloxi Blues” at REP East (FB) on March 29. April will start with “In The Heights” at Cabrillo Music Theatre (FB) on April 5, and should also bring “Tallest Tree” at the Mark Taper Forum, as well as the Southern California Renaissance Faire. As always, I’m keeping my eyes open for interesting productions mentioned on sites such as Bitter-Lemons, Musicals in LA and LA Stage Times, as well as productions I see on Goldstar, LA Stage Tix, Plays411.