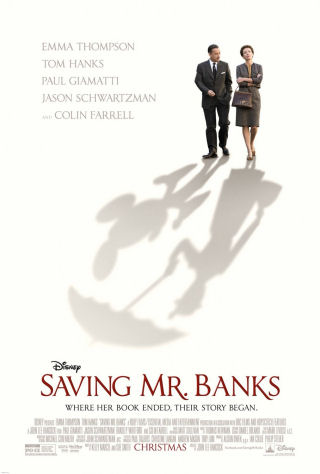 Market research firms for movies hate me. They call regularly, and ask what movies I’ve seen. I tell them I don’t go to the movies; I go to live theatre. They usually hang up at that point. But I do go to the movies — I always go on Christmas Day, and perhaps one or two other times  during the year. Yesterday was Christmas. Guess where I was, and what I had for dinner :-).

The movie we chose for yesterday was “Saving Mr. Banks“, from Walt Disney Pictures, directed by John Lee Hancock. I chose this movie for a number of reasons: first, it was getting good buzz from people I respect on that side of the story, such as Floyd Norman, who worked with Walt himself (his blog, if you’re into animation, is a must read). It was also getting excellent reviews. Most importantly: it was an interesting story: How did Walk Disney get the reclusive P. L. Travers to give permission to make the musical “Mary Poppins” (which in many ways was a groundbreaking film achievement, especially in the mixing of live action and animation). I have read some of the original Mary Poppins books, and have (of course) seen both the movie and the musical (which was impacted by the movie — and this story — in many ways).

“Saving Mr. Banks” stars Tom Hanks as Walt Disney and Emma Thompson as P. L. Travers.  It tells the story of the negotiation between Disney and Travers for the rights to make the movie “Mary Poppins“, as well as the story of how Travers was involved with the shaping of the final product. It also tells, through flashbacks, Travers’ childhood story and how that influenced the Mary Poppins story. Ferrett Steinmetz over on Livejournal had an insightful observation on this conflict: What made it interesting was that it wasn’t the expected conflict between corporate behemoth and artist fighting for the rights. Instead, it was a conflict between two artists who wanted to tell and protect the story that they loved, but each was seeing the story differently. They could move ahead only once they agreed on what the story was.

Discovering this agreement is where the flashbacks came in. These demonstrated how the characters in the story mapped to people in P.L. Travers (Helen Goff)’s life — in particular, how Mr. Banks was a mirror for Travers Goff, her father. Understanding that relationship — and the similar relationship between Disney and his father — was the key to the story.

Is the story presented true? From my understanding, it mostly is. I have no idea the truth of the flashback sequences and the extent to which Goff’s childhood influenced her writing as P. L. Travers. Given how she reacted to children (she never had any of her own, although she adopted), she may have been aiming the story more as an allegory for adults than amusement for children. I do know that certain elements of the portrayal of Disney were whitewashed a little — in particular, the Disney organization specifically requested that Walt never be shown inhaling cigarettes.

More importantly, the movie whitewashed Travers reaction at the end. One walked out feeling that she accepted Walt’s final product. In the end, she really didn’t — she tolerated what was done to the story, but completely rejected the combination of animation and live action. She wanted no cutesy animation in the story. As a result of this, she refused additional rights to Disney for movie adaption; further, when she permitted Cameron Mackintosh to make the stage version, she stipulated that no Americans were to be involved with the creative side (and this is why the Sherman Brothers, who were both still alive at the time, had no involvement with the development of the new songs in the stage “Mary Poppins”).

The movie didn’t touch on one thing I have always heard about the movie “Mary Poppins” and its music: that Walt Disney considered the song “Feed the Birds” to be the heart and soul of the movie. “Saving Mr. Banks” makes it appear as if that soul was found in “Let’s Go Fly a Kite”, a redemption song for Mr. Banks. It’s an interesting question about which is more the heart of the movie.

When I go see movies, I note the things that make the movie special. I think this was a story that wouldn’t work as well on stage (but I could be wrong). This was something that benefited from its period. It also had some excellent cinematography and special effects — I particularly noticed this in the transactions between “present day” and the flashbacks. I also noted the attention to detail in the historical Southern California sequences: the sequences on Laurel Canyon, the sequences at Disneyland, the sequences at the Chinese. I understand they did redressing of the current sites, which makes this even more remarkable. I also appreciated the historical LAX, which was in the period when the “new” LAX had just opened.

I’m not going to list all the credits for the movie — you can find them on IMDB. I will say that both Tom Hanks and Emma Thompsen gave excellent and believable performances, as did all the other leads. With film, you find that the actors focus on the performance; the joy of performing that one sees in a stage performer just does not come across.

Previews: Of course, what is a movie without previews. Here’s what was previewed and my thoughts:

[Ob. Disclaimer: I am not a trained critic; I am, however, a regular audience. I’ve been attending live theatre in Los Angeles since 1972; I’ve been writing up my thoughts on theatre (and the shows I see) since 2004. I do not have theatre training (I’m a computer security specialist), but have learned a lot about theatre over my many years of attending theatre and talking to talented professionals. I pay for all my tickets unless otherwise noted. I believe in telling you about the shows I see to help you form your opinion; it is up to you to determine the weight you give my writeups.]

Upcoming Theatre and Concerts:  All that remains in 2014 is one more movie: I’m seeing “Inside Llewyn Davis”  on Sunday, December 29. Looking into January: Our first ticketed performance is a concert performance of MooNie and Broon (FB) at The Colony Theatre (FB) on January 11. The first scheduled theatre is on January 18: “Mom’s Gift” at The Group Rep at the Lonny Chapman Theatre (FB) in North Hollywood. The following weekend, January 25, brings the first show of the REP East (FB) 10th season: “I Love You, You’re Perfect, Now Change“ (which we last saw at REP in 2006). February 1 may also bring “Vanya and Sonya and Masha and Spike” at the Mark Taper Forum, depending on Hottix availability (alternate dates are 2/2 and 2/9). February 8 will bring “Forever Plaid” at Cabrillo Music Theatre (FB). The following weekend, February 15, is being held for Lysistrata Jones at The Chance Theatre (FB) in Anaheim. The last weekend of February, February 22, is currently being held for Sutton Foster at the Broad Stage (FB) in Santa Monica (if I can find discount tickets). March brings “Sex and Education” at The Colony Theatre (FB) on March 8, and “Biloxi Blues” at REP East (FB) on March 29. It may also bring “Harmony” at The Ahmanson Theatre (FB) on March 22. The end of the month (actually April 5) bring “In The Heights” at Cabrillo Music Theatre (FB). As always, I’m keeping my eyes open for interesting productions mentioned on sites such as Bitter-Lemons, Musicals in LA and LA Stage Times, as well as productions I see on Goldstar, LA Stage Tix, Plays411.