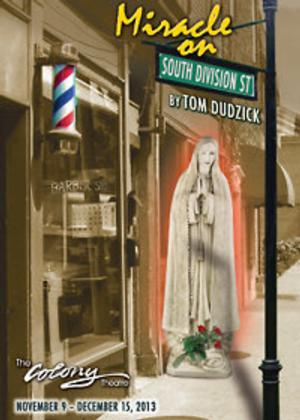 Catholic shrines and iconography. This is something I’ve never understood, being Jewish. The reference given to statues and miracles is just something beyond my ken. Yet such a shrine is at the heart of the last play of this weekend, “Miracle on South Division Street” by Tom Dudzick (FB), which we saw this afternoon at The Colony Theatre (FB) in Burbank.

Tom Dudzick describes his play as follows: “Miracle on South Division Street” is the story of the Nowak family, living amidst the urban rubble of Buffalo, NY’s East Side. Maybe the neighborhood is depressed, but not Clara, the family matriarch. She happily runs her soup kitchen and tends to the family heirloom – a twenty-foot shrine to the Blessed Mother which adjoins the house. This neighborhood beacon of faith commemorates the day in 1942 when the Blessed Virgin Mary materialized in her father’s barber shop! When the play opens, a family meeting is in progress. Daughter Ruth divulges her plan to finally “go public” with the family miracle by creating a one-woman play about the sacred event. But during the course of the meeting, the entire family’s faith is shaken to the very core when a deathbed confession causes the family legend to unravel. The results are heartfelt and hilarious.

Based on a true “shrine” in Buffalo on Senaca Street, the summary above is essentially correct. The main characters are Clara (Ellen Crawford (FB)), the family matriarch, and her three children: Ruth (Karianne Flaathen (FB)), an actress who has written a one-woman play based on the true story of the shrine; Jimmy (Brian Ibsen (FB)), who is about to propose to his girlfriend (whom the family has never met); and Beverly (Meghan Andrews (FB)), who is involved with a near-priest and whose sense of self comes from the shrine. I won’t spoil the secret of the shrine; let’s just say that it was quite unexpected and leads to quite hilarious results.

As always at the Colony, the play was very well performed. All of the cast was exceptionally talented and believable — I especially appreciated the little facial gestures and movements that made it look as if they were inhabiting their characters. Credit, as always, goes to a mix of the acting team and the director, Brian Shnipper (FB).

Technically, the set by Jeff McLaughlin (FB) did a wonderful job of creating a 1940s-era bungalow in Buffalo, down to the linoleum on the floor. This was supported by the appropriate props (including a load of food) from MacAndMe (FB). The costumes by Dianne K. Graebner (FB) worked well to convey the sense of place.  The sound effects by Drew Dalzell (FB) blended in well, and the lighting by Jared A. Sayeg (FB) was simple but effective. Leesa Freed (FB) was the production stage manager.

Dining Notes: Well, this really isn’t a dining note — more of a gaming note. Game Haus Cafe (FB), a project we helped Kickstart, has opened its doors in Glendale. Game Haus is a board game cafe — there are hundreds of board games as well as a small menu. For $5 you can game all day. An interesting concept, marred only by slightly difficult parking (which is beyond their control). Still, I intend to go back there, because I can play without having to wait for a scheduled game day. I’m thinking of going the day after Thanksgiving, assuming my head cooperates. Anyone want to join me? There is a summary of the games they have on Boardgamegeek.

Upcoming Theatre and Concerts:  This afternoon brings the rescheduled “Miracle on S. Division Street” at the Colony Theatre (FB). Thanksgiving weekend brings “Falling“ at Rogue Machine on Sat November 30, and may also bring the concert “There’s No Place Like Home for the Holidays” at REP East (FB) on Sunday December 1 [I’m unsure about this — on the one hand, it supports REP East… but on the other hand, it’s Christmas music]. December will start with “The Little Mermaid” at Nobel Middle School on Friday, December 6. We then leave for New Orleans and the Annual Computer Security Applications Conference (ACSAC). When we return we have an interesting play, “Sherlock Through the Looking Glass“, at the Odyssey Theatre Ensemble (FB). December, as currently scheduled for theatre, concludes with “Peter and the Starcatcher” at The Ahmanson Theatre (FB). Of course, there will be the traditional movie and Chinese Food on Christmas Day — right now, the two movie possibilities are “Saving Mr. Banks” opening December 13 (meaning we can use group discount tickets), or “The Secret Life of Walter Mitty” opening December 25. None of the other December releases look worth the money (I’d rather see “August: Osage County” on the stage, thankyouverymuch). Looking into January: The first scheduled show is on January 18: “Mom’s Gift” at The Group Rep at the Lonny Chapman Theatre (FB) in North Hollywood. The following weekend, January 25, is on hold for “I Love You, You’re Perfect, Now Change“, which is the first show of the REP East (FB) season. February 8 will bring “Forever Plaid” at Cabrillo Music Theatre (FB). The following weekend, February 15, is being held for Lysistrata Jones at The Chance Theatre (FB) in Anaheim. The last weekend of February, February 22, is currently being held for Sutton Foster at the Broad Stage (FB) in Santa Monica (if I can find discount tickets). March brings “Sex and Education” at The Colony Theatre (FB) on March 8, and March 22 is being held for “Biloxi Blues” at REP East (FB). Lastly, we may go see “Harmony” at The Ahmanson Theatre (FB) on March 29. As always, I’m keeping my eyes open for interesting productions mentioned on sites such as Bitter-Lemons, Musicals in LA and LA Stage Times, as well as productions I see on Goldstar, LA Stage Tix, Plays411.