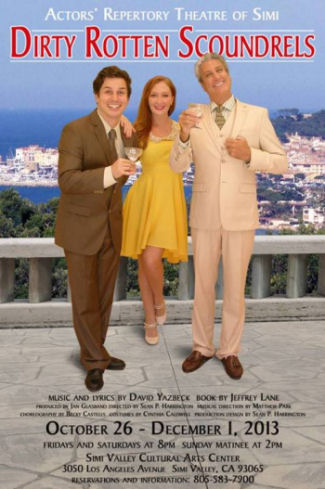 There are a number of shows where I purchase the cast album, and am lukewarm towards the show until I actually see it and can put the songs in context. There are other shows where I fall in love with the music the first time I hear it, and I’m eager to see a production.  One show in this latter category is “Dirty Rotten Scoundrels”. I bought the cast album back in October of 2005 and fell in love with the music and the extremely clever lyrics (I always thought a particular song in the first act was an allegory for a previous occupant of the White House). Alas, I was unable to see the show when the tour hit the Pantages or when it visited Orange County. I finally caught the show in 2010 when it was performed at the NoHo Arts Center by Interact Theatre Company. That show was good but had some problems. When I learned it was being done by Actors Repertory Theatre of Simi Valley (FB) at the Simi Valley Cultural Arts Center (FB), I put it on my calendar to get tickets. We saw the show last night. It was a very good production — a few technical problems, but the performances were excellent and it was a delight to watch.

“Dirty Rotten Scoundrels” is based on the 1988 movie with Steve Martin and Michael Caine (written by Dale Launer, Stanley Shapiro, and Paul Henning). Adapted for the stage by Jeffrey Lane, and with music and lyrics by David Yazbek, the story centers on two competing con men living on the French Riviera. At first, the suave and experienced Lawrence Jameson takes the rookie con man, Freddy, under his wing. But soon, Freddy tries to compete directly with Lawrence. The competition comes to a peak when they agree that the first con man to extract $50,000 from the female heiress, Christine Colgate, wins and the other must leave town forever. Going into further details might spoil the story for those who haven’t seen it, so I’ll note there is a more detailed synopsis on Wikipedia.

The original Broadway production had stellar performances by John Lithgow, Norbert Leo Butz, and Sheri Rene Scott in a full size house with massive scene changes. Smaller theatres have to get more creative with their spaces to pull this off; further, given their funding limitations, their casting presents more of a challenge. Actors Repertory Theatre of Simi Valley (FB) (henceforth, ARTS) has a few more challenges in this area, as they are an all volunteer organization that uses a mix of seasoned actors from the community and local amateurs. I’m pleased to say that ARTS’ casting worked: the combination of stellar leads, a strong ensemble, and good direction from Sean P. Harrington (FB). The strength of the performance overcame the few technical and musical glitches to provide a very strong show that was fun to watch. As I commonly say, I can never tell where the contributions of the director from the contributions of the actor, and so I tend to credit the actor believing the best directoral hand is an invisible one.  So to the extent my good words below belong to the director, consider them allocated.

One of the primary reasons for the success of this production are the leads: Kristopher Kyer (FB) as Lawrence Jamison, Stephen Weston (FB) as Freddy Benson, and Christanna Rowader (blog) (FB) as Christine Colgate. I know Kyer from the Forgotten Musicals group on FB, and we’ve seen him before as the lead in Chitty Chitty Bang Bang at ARTS. He was spectacular as Jamison, pulling him off as suave with a mischievous twinkle in his eye. The strong performance combined with strong vocal and movement worked very well. You can tell he was having fun with this role — and I’ve noted before that when the actors are having fun, the audience feeds off of that. Unlike the performance at NoHo Arts, his Jamison did not hold back — you could see pieces of the stick flying when he was whipping the legs of Freddy during “Rüffhausen’ Mit Shüffhausen” . The maniacal energy was great. Also exhibiting maniacal energy was Weston as Benson. This young man (who we haven’t seen before) was spectacular at physical comedy, including some that appeared to be seemingly improvised. This was demonstrated strongly in the “All About Reprecht” number, as well as many others. Again, this comedy talent was combined with strong singing and talent for a great performance that amplified that of the other leads. In the last lead position was Rowader, who we’ve seen before at Cabrillo Music Theatre (FB) and is yet another performer with strong singing and performance abilities. I felt that she could have amped up the physical comedy a pinch more in her introductory number (“Here I Am”) and her bedroom scene with Buzz; the physical clumisness of the schlmiel that is Christine needs to appear more painful for the poor schlemazel. But in the scheme of things (hmmm, and this is a musical about the scheme of things) that’s minor — Rowader is playful and works well with both Kyer and Weston, so much so that you can see them as a realistic team. This is the heart of the show, and this is what makes it work.   [Note: For some reason, Kyer is listed as Kristopher Antekeier in the first cast list in the program.]

In the second tier we have Elizabeth Stockton (FB) as Muriel (of Omaha) and Kevin Ellis/FB (filling in for Jeff Wallach (FB)) as Andre Thibault. Stockton’s Muriel was a very strong singer and performer (although she needs to fix the timing on “I’m Muriel, of Omaha”, although the audience that remembers Marlin Perkins is probably small now), and she seemed to really enjoy the witty lines the scripts give her. We’ve seen Ellis before — most notably, his excellent performance in CSUN’s Hair back in 2006, and he continues to be a strong performer. The combination of strong singing, good timing, and comic expressions from these two just made them fun to watch. Also fun to watch was Sharon Gibson/FB‘s Jolene Oakes. Her singing could have been a little stronger in the “Oklahoma” number, but her comic reactions during “All About Ruprecht” were great.

The choreography was by Becky Castells (FB), and it worked reasonably well given the performer mix. What was most important about the choreography was that the performers  appeared to be having fun executing it, as opposed to focusing on getting their feet in the right places. This permitted them to enjoy the show, and pass the enjoyment to the audience. This is a good thing — I’ve seen some shows where you can see the dancers counting, and it isn’t fun.

“Dirty Rotten Scoundrels” featured an onstage orchestra under the Musical Direction of Matthew Park. This volunteer orchestra was sizable (Cello, Reed I + II + III, Trumpet I + II, Horn, Trombone, Violin, Guitar, Bass, Synthesizer I + II, Percussion, and Drums — sometimes with multiple people for a given position) and was, for the most part, good. I say “for the most part”, because one horn (likely one of the Trumpet Is) was both too loud and out of tune, which distorted the sound of the whole. Other than that, the orchestra performed well and my only quibble was the portion of the back wall and lift controls behind the percussionist in the middle.

Turning to the technical side of things: The set was relatively simple (even simpler than the NoHo Arts set), with a stairwell/podium in the center and a number of props that moved on and off stage. This design, by the director Sean P. Harrington (FB) worked reasonably well (although it could have used a touch more elegance). No credit was provided in the program for the sound design, but the sound was clear and reasonable crisp. Lighting was by Alex Choate (FB) and was reasonable good, although at times the follow spot was a bit glaring and should have been blended better. The costumes were designed by Cynthia Caldwell/FB and were (for the most part) good. Some of the ensemble’s gowns could be fitted better, and my wife felt that Muriel’s costume in the second act needed some correction in the pants (whereas I noticed the odd bare midriff). Again, minor problems. Rounding out the production team were Megan Tisler (FB) (Production Stage Manager), Lacey Stewart/FB (Tech Director), Brenda Miller/FB (Prop Mistress), Jamie Whittington Studer (FB) (Asst. Prop Mistress), DeeAnna Caldwell/FB (Asst. Costumer), Hedy Lu Bares/FB (Asst. Costumer), Chris Slack (Set Construction), Corey Slack (Set Construction), Lynn Hubbard (Set Construction), and Jan Glasband (FB) (Flyer and Program). “Dirty Rotten Scoundrels” was produced by Jan Glasband (FB).

The Actors Repertory Theatre of Simi Valley (FB) production of “Dirty Rotten Scoundels” continues at the Simi Valley Cultural Arts Center (FB) through December 1, is and well worth seeing if you are looking for a good production of DRS at an affordable price. Tickets are available through ARTS, and discount tickets should be available through Goldstar. ARTS is also behind the upcoming Nottingham Village (FB) on November 16/17, which returns the Renaissance Festival to where it all began — eastern Ventura County! Upcoming ARTS productions at the SVCAC include “Shrek: The Musical” (March 30-April 6, 2014) — a birdie told me George Chavez/FB who we know from REP might be in this; “Sweeney Todd: The Demon Barber of Fleet Street” (June 7-July 13, 2014), and “Godspell” (July 26-August 31, 2014). Other upcoming productions at SVCAC (non-ARTS) include “Plaid Tidings” (December 7-22, 2013) and “bare – A Rock Opera” (January 11-February 15, 2014).

Upcoming Theatre and Concerts:  Next week is a rare theatre-free weekend, for we are visiting our buddy Thomas the Tank Engine when we volunteer at OERM over Veterans Day.  The following week will be theatre-ish, as we attend ARTS’s Nottingham Village (FB) (a one-weekend ren-faire-ish market — tickets are now on sale), as well as seeing the Trollplayers (FB) production of Steven Schwartz’s “Children of Eden” (which runs November 8-17) [Trollplayers is the community theatre group at Our Lady of Lourdes Church in Northridge]. That weekend will also bring a release party for a Kickstarted-CD by Big Daddy. The weekend before Thanksgiving is also very busy with three shows: Tom Paxton (FB) in concert at McCabes Santa Monica (FB) on Friday; “Play It Again Sam” at REP East (FB) on Saturday, and the rescheduled “Miracle on S. Division Street” at the Colony Theatre (FB) on Sunday. Thanksgiving weekend is currently open, as is much of December (December is due to the Annual Computer Security Applications Conference (ACSAC) in New Orleans, which has me out of two the first two weekends in December… but has me wondering about New Orleans theatre), but should bring “The Little Mermaid” at Nobel Middle School, and “Peter and the Starcatcher” at The Ahmanson Theatre. Looking into January…. nothing is currently scheduled, but it will likely bring “I Love You, You’re Perfect, Now Change“, which is the first show of the REP East (FB) season, running 1/17 through 2/15/2014… and the end of the month will bring “Forever Plaid” at Cabrillo Music Theatre (FB). Of course, we look forward to seeing you at ACSAC for the wonderful training opportunities there. As always, I’m keeping my eyes open for interesting productions mentioned on sites such as Bitter-Lemons, Musicals in LA and LA Stage Times, as well as productions I see on Goldstar, LA Stage Tix, Plays411.