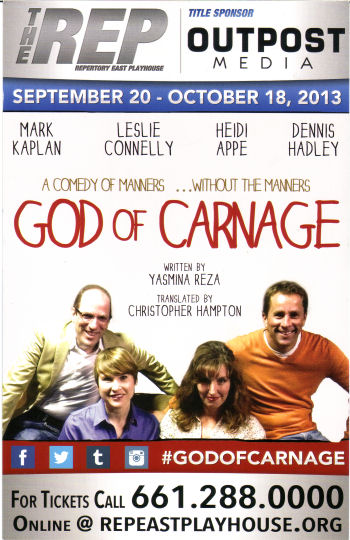 Back in Spring 2011, we missed seeing the New York cast of “God of Carnage” at the Ahmanson. We finally saw “God of Carnage” at ICT in February 2012. At that time, I thought it would be a great production for REP East (FB). Luckily, the artistic director must have read my mind, because it was selected for the 2013 season. Last night we were up at REP to see their production, and I’m pleased to say they’ve done their usual excellent job with it.

“God of Carnage” tells the story of two parental couples who are brought together because their pre-teen children had a schoolyard brawl–specifically, Benjamin Raleigh had used a stick to hit Henry Novak and knock out two of his teeth (injuring the nerve of one of them) [later we learn this occurred because  Henry refused to let Benjamin join his “gang” and called him names]. That evening, the parents of Henry (Veronica and Michael Novak) invite Benjamin’s parents (Annette and Alan Raleigh) over to discuss the matter, and to get their son to apologize personally to Henry. As the evening goes on, the parents civil discussion becomes significantly less civilized (especially after Annette vomits over the coffee table), and the veneer that the parents wear becomes ripped off. I could probably describe more, but is really best to watch and see the gory details as these to parents become children and brawl in the fancy living room.

As I was thinking about the show afterwards (as I’m familiar with the book), I was trying to think about what set the REP production apart from the ICT production a year ago. I think the answer is the direction. One thing I noticed — much more than at ICT — was the use of pauses, timing, and facial expressions. You learned so much more about the reactions of these parents from their responses and their body language on top of the written script. Watching Annette’s roiling stomach convulsing you believed in the visceral reaction she was having; Veronica’s reaction was written all over her face. The men’s body language showed their indifference to the whole mess… until it didn’t. Very very well performed and well directed.

With a small cast like this it is hard to single out any particular performance as all were excellent. The hosting parents — Veronica and Michael — were portrayed by Heidi Appe (FB) and Dennis Hadley (FB). The hosted parents — Annette and Alan — were portrayed by Leslie Connelly (FB) and Mark Kaplan (FB). All four were believable, funny, had strong stage presence, and were inhabiting their roles. So much so, in fact, that you believed Connelly was really sick when she vomited, that Kaplan was really more interested in the phone, that Hadley really was a Neanderthal under the surface, and that Appe truly could not stand the artificiality of the other couple. The acting team was directed by Ovington Michael Owston (FB), assisted by Kimbyrly M. Valis (FB).

“God of Carnage” was written by Yasmina Reza and translated by Christopher Hampton.

Turning to the technical. The elegant set was designed by Ovington Michael Owston (FB), and was expertly lit by Tim Christianson/FB. Sound design was by the REP resident sound designer Steven “Nanook” Burkholder/FB and was generally good. Two minor sound comments — the volume of the Pandora radio that plays before the show was a little high, making conversation difficult, and the directionality of the cell phone sound effect was a little disconcerting sitting in the front (although the only way around that would be a small speaker — or second cellphone — in the actor’s pocket). Print design was by the sleep-deprived Mikee Schwinn/FB, and J. T. Centonze (FB) (in his utilikilt) was the stage manager.

“God of Carnage” continues at REP East (FB) in Newhall until October 18, 2013. Tickets are available through the REP Online Box office; discount tickets are available through Goldstar, as well as special discounts for readers of Bitter Lemons (and speaking of Bitter Lemons, they have a Kickstarter that needs support). Next up at REP East is “Play It Again, Sam“, running from November 15, 2013 through December 14, 2013. REP has announced their 2014 season (their 10th), which consists of “I Love You, You’re Perfect, Now Change“, Neil Simon’s “Biloxi Blues“, “Cat on a Hot Tin Roof“, “Return to Forbidden Planet“, “The Great Gatsby“, and “Sherlock Holmes and the Adventure of the Suicide Club“. Dates for these productions have not been announced.

Upcoming Theatre and Concerts:  Theatre in October starts on the 5th with “Breath and Imagination” at the Colony Theatre (FB).  The second week of October sees me at the West Coast Premier of “Burnt Street Boys“ at the Third Street Theatre (FB).  The third week of October is being held for the production of “Carrie – The Musical” (FB) by Transfer Theatre, but tickets are not yet on sale (and it is increasingly looking like this production will now be in 2014). October ends with the Cabrillo Music Theatre (FB) production of “Kiss Me Kate” (October 26). November starts with “Dirty Rotten Scoundrels” at Actors Rep of Simi (FB). That will be followed by a visit with Thomas the Tank Engine when we volunteer at OERM over Veterans Day.  The third week will be theatre-ish, as we attend ARTS’s Nottingham Village (FB) (a one-weekend ren-faire-ish market — tickets are now on sale). One of those weekends we’re also likely to see a Trollplayers (FB) production of Steven Schwartz’s “Children of Eden” (which runs November 8-17) [Trollplayers is the community theatre group at Our Lady of Lourdes Church in Northridge]. The weekend before Thanksgiving will bring Tom Paxton (FB) in concert at McCabes Santa Monica (FB) as well as “Play It Again Sam” at REP East (FB). The last weekend of November brings a rescheduled “Miracle on S. Division Street” at the Colony Theatre (FB).  December is mostly open, but should bring “The Little Mermaid” at Nobel Middle School, and “Peter and the Starcatcher” at The Ahmanson Theatre. As always, I’m keeping my eyes open for interesting productions mentioned on sites such as Bitter-Lemons, Musicals in LA and LA Stage Times, as well as productions I see on Goldstar, LA Stage Tix, Plays411.