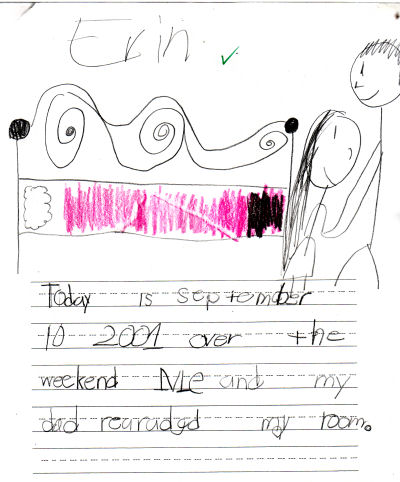 Above my desk at home I have a drawing of a 6 year old girl and her daddy, with a caption along the lines of “My dad and I moved my bed today.” It shows a new daybed, and everyone happy. It is dated September 10, 2001.

Today is September 11, 2013. Twelve years since the planes flew into the towers. I remember the morning well: I had turned on the news before leaving for work, and saw the reports of the planes flying into the towers. I remember listening to the news as we drove the van to El Segundo, not knowing what we would find. I seem to recall an emergency shutdown that day, as everything was locked down (we work co-located with an Air Force Base).

At the time, we were working with Margie Templeton (formerly of SDC) on her database project. Her company lost of most of its marketing people that day.

Usually, I opine. Today, I pine.

I pine for the horrific loss of life we had that day — the loss of the innocents who had no part in the underlying disputes. I feel for their loved ones, who had parts of their lives ripped away for no reason.

I pine for all those we have lost since in the name of revenge, retribution, and fighting the terrorist threat. I agree the threat needed to be fought, but did we approach the fight the best way?

I pine for what our society has lost — civil liberties, privacy, and trust in government. All can be directly attributed to the loss of 9/11. America has been changed for the worse by the terrorist act.

I pine for the loss of the rules of war. War — although horrific — used to have rules that were followed. These included minimization of attacks on civilians. Let the uniformed soldiers fight. Today’s terrorists don’t follow those rules. 9/11 didn’t start this decline, but it has certainly accelerated it.

So on this day, let us pine. Let us remember. In Judaism, the expression is “May their memory be for a blessing.”. On this day, let the memory of who and what we have lost be for a blessing. Let us, shall we say, pray, for the day when the “what” we have lost is restored, as well as “pray”ing that the memory of the “who” lives on in our memories of the good that they have done.