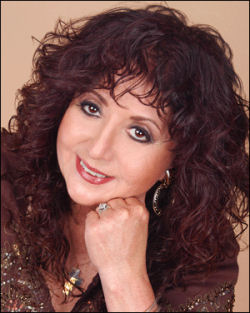 We don’t always go to the theatre. Point in case: Last night saw us in Santa Monica (which was about 20° cooler than the 103° in Northridge) to see a wonderful singer, Maria Muldaur at McCabes Guitar Shop.

It is hard to categorize Maria Muldaur, other than “good”. She started out singing Jug Band music with her then husband, Geoff Muldaur, in the Jim Kweskin Jug Band. She hit the pop charts in 1974 with “Midnight at the Oasis“, but was part of the folk and jug band scene going back to 1963 and Greenwich Village. She had done 40 albums with a wide variety of musical styles, from New Orleans jazz to Blues to Big Band to Gospel. She was also part of the Grateful Dead as a backing singer (which explains the Deadheads at the show). I was first introduced to her in the 1970s when joined with Peter Yarrow on the song “Tall Pine Trees” on Peter’s first solo album, Peter. I was reintroduced to her when recording folk and blues album for my uncle, who had a few of her solo albums. I’ve since acquired a few more albums, so when I saw that she was going to be at McCabes, I got tickets.

Unlike Elton John, Maria’s performance was very simple. Maria (on tambourine), backed by her Red Hot Bluesiana Band (featuring someone whose name I’ve forgotten on guitar, Chris Burns on keyboards/bass, and Dave Tucker on drums). I didn’t record a formal song set, but here’s what I remember: (I Am) Woman • Me and My Chauffeur Blues • Long as I Can See You Smile • I’m Going Back Home • In My Girlish Days • He Calls That Religion • Don’t You Feel My Leg • Midnight at the Oasis • Please Send Me Someone To Love • It Ain’t The Meat, It’s The Motion • I’ve Done Made It Up In My Mind and Bessie’s Advice. Most of the stuff was from her first two albums and her two most recent albums.

In general, her vocal quality and performance quality was wonderful (although my wife noted that, in Midnight at the Oasis, she couldn’t hit the high notes that she used to be able to hit). Her voice has mellowed into a great blues voice, not as much of the pop voice it once was. Her backing group was great — I particularly enjoyed the keyboardist.

Maria is currently on tour in California: those in the Bay Area can see her on July 6/7 with the Jim Kweskin Jug Bag at Freight and Salvage in Berkeley.  She’ll also be in Sacramento.

Dining Notes: Discovered a new restaurant (to us) for when we go to McCabes: Lares Restaurant. Next to the classic Raes, Lares is an excellent Mexican restaurant, in walking distance to McCabes (meaning you only need to park once). We’ll be back the next time we go to McCabes.

Upcoming Theatre and Concerts:  Tonight bring Man of No Importance“ (Hollywood Fringe) at the Lillian.   July starts with a musical we had originally planned for Fathers Day weekend: “Ionescapade” at the Odyssey Theatre Ensemble. That will be followed by “9 to 5 – The Musical” at REP East on July 14, and “Legally Blonde – The Musical” at Cabrillo at the end of the month. July will also (hopefully) see us as OperaWorks at CSUN. August is currently completely open due to vacation planning, although we may see a show at the Lawrence Welk Resort in Escondido at the end of the month (depending on price), or at another venue in San Diego.