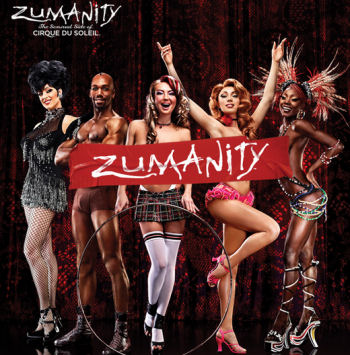 Tonight we did the “Vegas Thing”, and went to see a show. Specifically, we saw Zumanity at New York New York, one of seven Cirque shows currently running in Vegas. How would I describe the show? Modern Dance, Athleticism, a touch of comedy, audience participation, combined with lots of sex. It was a beautiful show — I don’t know how typical it was of Cirque shows — and one that I enjoyed. But it wasn’t a show in the theatre sense — there was no plot or through line. I was about to write that it was like Bob Fosse’s Dancin’ (in other words, no plot, just dancing), but then I realized that although there wasn’t a through line, there was a point — to embrace your sensuality, to enjoy love and sex, and to experiment. So let’s look at each of the characteristics of Zumanity in turn.

First, the dance. Almost all of the numbers in Zumanity were dances of some form of another, or dances combined with gymnastics and aerobatics. All were excellent. I particularly enjoyed the waterbowl, where a number of female dancers, topless, used a large waterbowl to express movement and feeling (Ulziibayar Chimed, Bolormaa Zorigtkhuyag/FB, Estefania Laurino and Gyulnara Karaeva). Also great was the Roue Cyr, where a male actor (Jonas Woolverton) was in a large hoop, and would spin and rotate around.

Most of the numbers had remarkable athleticism. Numbers of particular note were the hand balancing number, where a male performer essentially did a pole dance holding himself perpendicular to the pole (Dima Shine (FB)). Also great was the hoops number, where a female actor (Julia Kolosova) was using hoops and aerobatics to do remarkable moves. My wife was very impressed with the tissues number, where remarkable arobatics were performed using just a hanging ribbon (Alan Jones Silva, Anna O’Keefe).

Now for the sex part. I should note that the sex is geared towards the Las Vegas audience. In other words, what might shock a midwesterner (“look, Gladys, bare breasts!”) would hardly phase an Angeleno. The cast does a great job of trying to get a rise out of the audience, and tries to be extremely playful and risque. That’s why it is over 18 only, folks! If any number truly captured sex, however, it was the straps number (Jill Crook (FB)), which went to the edge of voyeristic auto-asphyxiation. I should note that it was nice that the show did not give in to the tendency to have artificially enhanced actresses. It is important to embrace the natural beauty in all.

What problems did I have with the show? Well, other than the audience (which had no idea how to dress for a show, but that’s Vegas!), I only had two. First, there were two large actresses in the cast (Licemar and Luciene Medeiros) — large, buxom, and beautiful. They were used only for comedy numbers, and the one quasi-sexy comedy number that they had, they did in body-suits.  If the show truly wants to reach today’s American audience, then show that these large actresses can be sexy. Show that large women (and large men) can be beautiful, act, and be athletic. Don’t give in to the stereotype that large is only the butt of a joke.

My second complaint has to do with the program they handed out. It had one page for each different Cirque show. What it didn’t do was tell me about the cast and the crew. You can get that information only if you pay for a full size program. Even the Las Vegas Sun review didn’t list all the actors. It isn’t even on the website. The cast members I’ve listed here were developed by looking through numerous websites. This show had talented actors, talented musicians, and a talented technical team. Tell me about them — their experience and their talent and training. This not only informs the audience, but is important for your actors and their careers. Don’t shortchange them; they are too good.

Upcoming Theatre and Concerts:   Tomorrow night brings a different sort of Vegas show — Elton John in concert at Caesers Palace. May also brings “Falling for Make Believe” at The Colony Theatre and “To Kill a Mockingbird” at REP East. Lastly, continuing the look ahead, June will bring (tenative) “The Scottsboro Boys” at the Ahmanson Theatre, “Priscilla – Queen of the Desert” at the Pantages, and (tentative) Sweet Charity“ at DOMA. July is currently more open, with “9 to 5 – The Musical” at REP East in the middle of the month, and “Legally Blonde – The Musical” at Cabrillo at the end of the month. August is currently completely open due to vacation planning and the potential Nottingham Faire. I’m also keeping my eyes open as the various theatres start making their 2013 season announcements. Lastly, what few dates we do have open may be filled by productions I see on Goldstar, LA Stage Tix, Plays411, or discussed in the various LA Stage Blogs I read (I particularly recommend Musicals in LA and LA Stage Times).

2 Replies to “A Circus of Sex”