I’ve had at least two people on Facebook tag me in posts about Elon Musk and the 405 (I can say that–I’m a SoCal native), and at least two other folks on Facebook write about the article. Musk’s use of personal funds to try to speed construction on I-405 is circulating fast around the blogosphere, perhaps because everyone thinks “here is someone who is putting his money where his mouth is”. Only one problem. He really didn’t do anything.

Here’s the background: Interstate 405 (called I-405 by most folks and “the 405” by those in Southern California) has been under construction for a number of years to add the missing link in the HOV network: a NB HOV lane between I-10 and US 101. This is a hard section to do: it literally required moving mountains in the Sepulveda pass to widen the road and move the parallel highway. It has required full reconstruction of three major bridges (Sunset, Getty Center, and Mulholland), relocation and reworking of several off-ramps and on-ramps, movement of the parallel highway (Sepulveda Blvd) and its underground utilities, and construction of major retaining walls and sound walls. Unexpected delays have pushed completion from late 2013 to at least mid 2014. The LA Times wrote a major piece on it yesterday as if it was new news; however, LA Metro had written about the delays back in mid-February and had described the source of the delays. 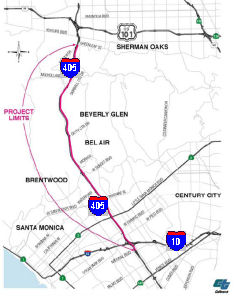 Where does Musk come into this? Musk commutes daily over the 405 from Bel Air to Hawthorne. Truthfully, he doesn’t see the worst of it — which I do, commuting daily over the complete pass from Northridge (in the Valley) to El Segundo (near the airport). Still, even though Musk only goes as far as Sunset, he contributed money out of frustration with the project. This donation made the Los Angeles Times, which due to Musk’s technology connections, was then echoed in Slashdot. There are two problems with this romantic story: not one cent of Musk’s money went towards construction, and even if it had, $50K is a drop in the bucket for a multi-million dollar project. Further, it is unclear if additional money will make the project will go faster — after all (as they say), nine women cannot make a baby in a month.

So what did Musk do exactly? Curbed LA has the story. Musk donated his money not to LA Metro (the construction authority — and it is unclear whether one can legally donate money to a public works project), but to “Angelenos Against Gridlock“, an advocacy group. In other words: Musk’s $50K went to a lobbying group. What did this money do? Back in February, the LA Times wrote about AAG:  they held a demonstration outside the Federal building in Westwood (which, as such demonstrations do, probably made traffic worse on the Westside).

So what could have made the 405 HOV project (follow that link for full details on the project; or go to this Caltrans page or this Metro page) go faster?  Probably a little less NIMBY-ism, which delayed the Mulholland Bridge construction and torpedoed a plan that would have reconstructed that bridge without the need for two carmaggedons. Better construction quality would have helped, as one source of delays has been due to having to reconstruction failing new retaining walls. Some factors were unavoidable — such as having to construct in a way to keep down noise and dust, and some were unexpected — such as unknown utilities and structures on Sunset.

Do I wish this project was done? Yes. Especially with the recent Coldwater Canyon Closure, traffic has been horrendous. We’ve had at least 3 days in April with almost 120 minute afternoon commutes (the normal is 85 minutes). The new project will add an HOV lane, which will be a godsend as I drive a vanpool. But will Musk speed it up? No, unless SpaceX provides a daily rocket over the pass, and even then, it wouldn’t have the capacity.

Lastly, for those saying we should build a train and such…. First, to do so would be even more problematic, given the extra widening required. Metro is exploring building a light-rail tunnel under the pass for connection with a N-S transit solution in the mid-valley (roughly Van Nuys) under consideration. You can read about all the options under exploration in this Metro Powerpoint presentation. In short: any option is ungodly expensive, and the money simply won’t be there for quite a few years — and even then, the project will take years to construct.

One Reply to “A Drop in the Bucket”