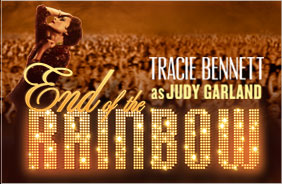 Whenever I think of Judy Garland, I think of my mother. Both were brilliant and talented, and knew how to manipulate people around them through charm and style. Both also saw their lives destroyed — far too young — by the pressures of the job, by pills, and by booze. Luckily, my mother did much better than Judy in the husband department :-). I mention this because last night we saw Judy Garland — or a reasonable facsimile thereof — at the Ahmanson Theatre when we saw “End of the Rainbow“.

“End of the Rainbow” (EotR) is one of two shows currently playing in Los Angeles about singing superstars whose lives were destroyed by pills and booze (the other is “One Night with Janis Joplin” at the Pasadena Playhouse). The focus of EotR is the end of Judy’s life: the final concerts in London in 1968, and her final marriage with Micky Deans. The show presents a remarkable portrayal of a woman who is no longer at the top of her game; a woman for whom the craving for pills and booze have led to self-destructive behavior. It also shows how Judy’s poor choice in men contributed to her downfall — men often more in love with the image of Judy and the power of that image than for the little Francis Gumm inside the icon.

The show also seems to play up her relationship with her gay piano player Anthony; this seems an intentional homage to Judy’s status in the gay community. At the performance we were at, it seemed to be working. Just like when we were at the Pasadena Playhouse and the African-American community suddenly appeared for the African-American themed shows, the Ahmanson audience seemed tilted with gays and with older people that remembered Judy. It clearly highlighted one problem live theatre has in America: it is one form of live entertainment that is not attracting young people and growing. How to address that problem has been often discussed. It is certainly not being well addressed by the larger theatres in Los Angeles, for we’ve noticed the greying of the audience not only at the Ahmanson, but the Colony, Cabrillo, Pasadena Playhouse, Pantages, and other larger venues. Certain audiences can be brought out for particular shows (such as the gay audience here, or youth for shows like Wicked, American Idiot, or Fela!), but converting that audience into regular theatre-goers is difficult.

The center of this remarkable show is Tracie Bennett. She portrays the manic Judy at the end of her life. As such, her singing is no longer perfect, and she has become a caricature of the actress Judy. She also captures the drive and energy of Judy, and when she is performing, you can see how Judy wowed the audiences in concerts. You can also see how she influenced her daughter, Liza — both were more singing actresses who found the story and the connection to the song, as opposed to being a mere chanteuse.  The energy and passion she brings to her performance must be exhausting. A simply fascinating character study to watch.

You might notice I didn’t say that Bennett was the heart of the show. That’s because she isn’t. The heart of the show is Michael Cumpsty as Anthony. Anthony is a fictional Scottish accompanist hired for the London shows; he supposedly worked for Judy for the disasterous Melbourne Australia shows. He is also explicitly homosexual (and Scottish, if that makes any difference). Cumpsty’s Anthony is the calming presence. Anthony is always there with the sympathizing voice or the satiric barb; he is the voice of the playwright. He also is the voice of the gay community saying to Judy: come live with us — with us you’ll be accepted and loved for who you are. In this way, his character is a little offensive as it serves to play off the homosexual stereotype for humor. Some of the reviews I read indicated that he also expresses the voice of the playwright, Peter Quilter.

The obstacle in the show is Judy’s soon-to-be last husband and manager, Mickey Deans, portrayed by Erik Heger. The show fudges a bit here, portraying them as engaged even though it is still only 1968. Still, Deans gives the impression of an enabler. Initially, he hides the drugs (Ritalin) and the booze, but keeps heaping on the pressure that drives Judy to them. Later, he gives into to her needs for the  pills and booze, and in doing so hastens her demise. Heger’s performance is clearly that of a user of people.

The production was directed by Terry Johnson, who does a great job of bringing these characters to life through his actors. The set and costume design was by William Dudley. The set was primarily Judy’s London hotel room, with periodic foreys to the “Talk of the Town” performance stage created by removing the back wall of the hotel room to reveal the orchestra and lowering a “Talk of the Town” sign. Costumes seemed appropriately period. Lighting was by Christopher Akerlind, and sound was by Gareth Owen.

“End of the Rainbow” is not a musical — it is a play with music (i.e., the music does not serve to move the story). The orchestrations of the Judy Garland songs was by Chris Egan. Jeffrey Saver served as Music Director, and Seymour Red Press was Music Coordinator. Gareth Valentine did the musical arrangements.  The onstage band consisted of Michael Cumpsty on piano (although not explicitly credited), Jeff Driskill on woodwinds, Daniel Fornero on trumpet, Robert Payne on trombone, Ken Wild on bass, and Ray Brinker on drums.

Mark Dobrow was the Production Stage Manager, and Rachel Zack was the stage manager.

“End of the Rainbow” continues at the Ahmanson through April 21. Tickets are available through the Ahmanson website.

Transportation Notes: As there were three shows at the Music Center, we decided to avoid the parking mess last night by taking Metro from North Hollywood. Worked like a charm. The walk through the new Grand Park was very pleasant, and will be something we’ll do again.

Upcoming Theatre and Concerts:   April has less theatre — so far, only one show is scheduled. The first weekend of April is open. The next weekend brings with the Southern California Renaissance Faire.  Following that is “Grease” at Cabrillo Music Theatre, and April concludes with a winetasting at Temple Ahavat Shalom. May is busy in a different sense, with two concerts — Elton John in Las Vegas on May 4, and (tentative) Michael Feinstein at VPAC on May 11. May also brings “Falling for Make Believe” at The Colony Theatre and “To Kill a Mockingbird” at REP East. Lastly, continuing the look ahead, June will bring (tenative) “The Scottsboro Boys” at the Ahmanson Theatre, “Priscilla – Queen of the Desert” at the Pantages, and (tentative) Sweet Charity“ at DOMA. July is currently more open, with “9 to 5 – The Musical” at REP East in the middle of the month, and “Legally Blonde – The Musical” at Cabrillo at the end of the month. August is currently completely open due to vacation planning and the potential Nottingham Faire. I’m also keeping my eyes open as the various theatres start making their 2013 season announcements. Lastly, what few dates we do have open may be filled by productions I see on Goldstar, LA Stage Tix, Plays411, or discussed in the various LA Stage Blogs I read (I particularly recommend Musicals in LA and LA Stage Times).