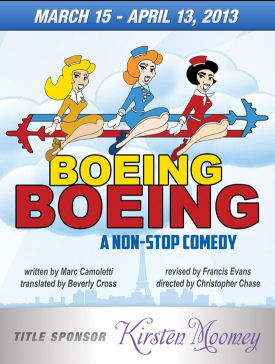 Listen, children, and gather around while I tell you a story of the past. No, not the exodus from Egypt. That’s Monday night. Today’s story concerns a different type of transportation. You see, once upon a time there were these things called “timetables”. They covered all forms of transportation: buses, railroads, and airplanes. In fact, there was a special book published called the Official Airline Guide, that had the timetables for every flight by a commercial airline. In the days before personal computers, this is how you determined what flights were where. Schedules were very static, and tended not to change all that much unless new aircraft were introduced. In fact, one could build a life around the schedules.

Last night, at Repertory East Playhouse (FB), we saw the 1965 French farce “Boeing Boeing“, written by Marc Camoletti, revised by Francis Evans, and translated by Beverley Cross . “Boeing Boeing” is the story of a man who has built his life around timetables — in this case, airline timetables. This man — Bernard — is living and working in Paris, and is engaged to three women, all flight attendants. Fiancee #1 is Janet, a Pan-Am stewardess flying across the Atlantic regularly. Fiancee #2 is Jaqueline, an Air France stewardess regularly flying to the Middle East. Fiancee #3 is Judith, a Luftansa stewardess. Helping Bernard manage all of this is his long suffering maid, Bertha. For a number of years, Bernard successfully manages this juggling act. However, the balls all start to get confused just as Bernard’s long time friend, Robert, comes to visit and stay for a few days. Why? Pan Am has moved to a faster variant of the Boeing 707, one that produces almost 3,000 lbs more thrust… and is moving Janet to the route.  Air France is also upgrading aircraft, and is moving Jacqueline to the new Caravelle jet. The net effect of all of this is that Bernard’s timetables are ruined. After seeing Janet off to New York, and while having lunch with Jacqueline, Judith shows up to Bernard’s apartment early — and has a changed assignment where she can stay three days. This is the first in a series of timetable changes that leaves all three girls going in and out of the apartment, where juggling occurs only thanks to the help of Bertha and Robert. I won’t spoil the details of the farce, but suffice it to say it is very fast and funny.

My first thought upon seeing this was synchronicity with other recent shows. Just last week we saw “Catch Me If You Can“, a story with a large emphasis on tall, leggy, Pan-Am stewardesses. Two weeks ago we saw “Company“, a story about a man named Robert who is juggling three girlfriends and who wants to get married, if he can ever figure out why he wants to get married. There are themes in both of these plays common with our main character: someone who is pretending to be something he is not, someone who wants to find love, but doesn’t have the strength to settle for just one until life decides to get involve and force him to consider the choices he has made. However, this is probably too much analysis. After all, the original story was clearly defined as farce, not something this is intended to have deep meaning or to resonate in various ways.

From what I understand (as I haven’t seen them), the original play (and subsequent movie) treated Bernard and Robert straight. Both were more sophisticated characters (in the movie, Bernard and Robert were Tony Curtis and the suave, not comic, Jerry Lewis, respectively), letting the farce and the situation provide the humor. At REP, the director, Christopher Chase (FB), took the story in a more physical direction — much of the humor came from physical comedy and physical reactions of the two primary male leads (Macleish Day* (FB) as Bernard and Nick Ruth/FB as Robert) and the long-suffering Bertha (Nikki Jacobs (FB)). I was initially unsure about Day’s Bernard — I didn’t think he had the looks to be the playboy type (but often that seems to be the case in farces). However, Day won me over with his physical comedy, which was spectacular. His long-limbed rubbery body reminded me of Jim Carry in the early days, and worked very well with the direction that Chris Chase took this comedy. Ruth’s Robert was more a reactive partner-in-crime: facilitating the subterfuge, thinking quick and reacting as the situation rapidly goes south. A third comic gem as Jacob’s Bertha, who reminded me of a sardonic Nancy Walker (in writing this up, I discovered that the role of Bertha in the past has been played by Rhea Perelman and Christine Baranski). Jacob’s comic timing and experience served her well in this role, and also permitted her to find the funny as various things happened due to the nature of live theatre.

Serving as both the beauties of the story, as well as catalysts for the action in the story, are the three flight attendants. The first one we meet is Melanie Wahla* (FB) as the American, Janet (Wahla also helped with costumes and the set development).  I was initially unsure about Wahla, simply because she didn’t have the Pan-Am stewardess look I saw the previous week in “Catch Me If You Can“. However, Wahla won me over and shone in the second act with great comic timing and agressiveness. On the other hand, I instantly fell in love with the look of the Air France attendant, Jacqueline, played by Alana Marie Cheuvront (Etsy) (FB); I could easily see why Bernard would want to marry her. Cheuvront was also strong both comically and emotionally, and had a wonderful French je ne sais quoi. Lastly, as our Luftansa attendant, Judith, was portrayed by Carole Catanzaro (FB). Catanzaro had the stewardess look: long, leggy, powerful. But Catanzaro’s Judith didn’t just project beauty; she also projected the strong Germanic power needed for a German attendant — that “you will do what I say… or else” attitude that proved a great instigator for the comic side of the story.

In short, the REP nailed it on casting yet again. (* indicates members of Actors Equity).

Production-wise, “Boeing-Boeing” had the usual excellent job by the REP regular team. The scenic painting and design were by Ovington Michael Owston/FB, Mikee Schwinn/FB, Melanie Wahla* (FB), and Christopher Chase (FB). Lighting was by Tim Christianson/FB, and Steven “Nanook” Burkholder/FB handled the sound with his usual expertise. Costumes were by Melanie Wahla* (FB), and Christopher Chase (FB), with additional costumes from Tonya Nelson of NSA Costumes. According to the program, Christina Aguilar/FB was the production stage manager and Levanna Atkinson-Williams (FB) was the stage manger; however, at the production we were at, Mikee Schwinn/FB and his brother Johnny/FB were ably holding down the fort.

“Boeing Boeing” continues at REP East Playhouse until April 13. If you friend REP East on Facebook, you can often learn of discount tickets (and how to get discount drinks from the Hydeaway Lounge).  Tickets are available through the REP Online Box Office or through Goldstar.

Upcoming Theatre and Concerts:   March ends with “End of the Rainbow” at the Ahmanson on March 30. April has less theatre — so far, only one show is scheduled. The first weekend of April is open. The next weekend brings with the Southern California Renaissance Faire.  Following that is “Grease” at Cabrillo Music Theatre, and April concludes with a winetasting at Temple Ahavat Shalom. May is busy in a different sense, with two concerts — Elton John in Las Vegas on May 4, and (tentative) Michael Feinstein at VPAC on May 11. May also brings “Falling for Make Believe” at The Colony Theatre and “To Kill a Mockingbird” at REP East. Lastly, continuing the look ahead, June will bring (tenative) “The Scottsboro Boys” at the Ahmanson Theatre, “Priscilla – Queen of the Desert” at the Pantages, and (tentative) Sweet Charity“ at DOMA. July is currently more open, with “9 to 5 – The Musical” at REP East in the middle of the month, and “Legally Blonde – The Musical” at Cabrillo at the end of the month. August is currently completely open due to vacation planning and the potential Nottingham Faire. I’m also keeping my eyes open as the various theatres start making their 2013 season announcements. Lastly, what few dates we do have open may be filled by productions I see on Goldstar, LA Stage Tix, Plays411, or discussed in the various LA Stage Blogs I read (I particularly recommend Musicals in LA and LA Stage Times).