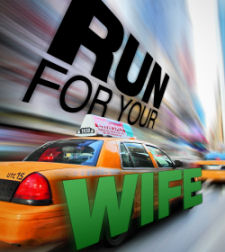 My first introduction to the unique theatrical form that is farce — at least that I recognized as farce — was in 1982 in New York, when I saw the Michael Frayn play “Noises Off” in its first run on Broadway. Since then I’ve seen farce off and on — a revival of “Noises Off” at the Pasadena Playhouse in 2003, “Don’t Dress for Dinner” at REP in 2006, “Is He Dead?” at ICT in 2009, “The 39 Steps” at the Ahmanson in 2010, various Oscar Wilde and Noel Coward farces, and numerous others — but I haven’t sought them out. I’ve typically seen them as part of a season, with a few exceptions. Yesterday afternoon was one of those exceptions, as some good friends invited us to join them for the Canyon Theatre Guild (FB) production of Ray Cooney‘s “Run for your Wife” in Newhall.

“Run for your Wife” is a 1983 farce that was extremely popular in the UK, and is a favorite of regional and small theatre companies, as it works well and tends to be popular with audiences. It doesn’t appear to be as popular on the big screen: a theatrical version opened this week, and appears to be getting very poor reviews (UK Independent: “Biggest Turkey Ever Filmed“; UK Guardian: “woefully dated“). In general, theatrical farce doesn’t work on the screen, because all the timing risks are gone.

In general, timing is at the heart of farce. Usually, farce depends on split second timing, word play, sexual humor, quick entries and exits, and reactions. Combine this with a British accent, and you’re off and running. Run for your Wife is no exception. At the heart of Run for your Wife is a timing problem. John Smith is a taxi driver who has a balancing problem. He has one wife, Mary, in Wimbledon who he sees after his afternoon shift… and another wife, Barbara, in Streatham (4½ minutes away), who he sees after his morning shift. John is very precise in his schedule. So when John fails to materialize at the expected time, each wife rings the local police to report him missing. When John surfaces at Mary’s flat, it is after being in hospital with a head injury received fending off muggers. This not only gets him in the news, but confused him enough that he gave both addresses to the hospital. And this sets everything in action. Soon the mix is joined with detective sergeants from both the Wimbleton and Streatham police stations attempting to find out what happened to John. Of course, John isn’t helped by his upstairs neighbor in Wimbleton, Stanley Gardner, to whom he confides his secret. That’s the basic setup, so you can now imagine how the confusion grows as Stanley and John attempt to protect their secret by building lies upon fake identities and running back and forth between flats. There’s one last fly in the ointment: Bobby Franklin, a flaming gay interior designer who lives with his boyfriend in the flat above Mary Smith, and who has spilled some cans of red paint that are dripping into the bathroom. Lastly, I should note that Run for your Wife  typically is staged in a single room that represents both flats, split in half with one flat predominately in one side in one color, and the other flat on the other side. Ready. Set. Go. Laugh.

For the most part this works well, but the book is a little dated. Especially in the second act, the play tends to take the typical British 1980s stereotypical view of homosexuals. Formally setting the play in the 1980s helps a little to excuse this, but it is still grating to today’s sensibilities. This is something a director needs to be sensitive about — it is a problem many plays and musicals face when they get revived (look at the controversies over the revival of Showboat in 1993). It didn’t seem to affect that CTG audience at our performance, but that is likely because the humor is so broad and slapstick it was just ignored. Another reason could very well be that in the theatre, for farce, one tends to write off any plot specifics anyway. Farce plots are convoluted and far-fetched to begin with. This sets up the humor, and enables it to continue at the frantic pace that farce requires. If you insist that a theatrical farce have a realistic plot — or even one whose twists can be easily described — then you are just wasting your time. [I’ll note that this is often not true for cinema unless you are dealing with animation; if you film it realistically, the audience expects the story to be realistic.]

Run for your Wife depends on accurate timing, on lots of dialogue said correctly, and on great reactions from the actors as the farce builds. Luckily, the director of Run for your Wife, Mike Davies/FB, assisted by Heidi Meiseles/FB, did a very good job of getting this out of his team. Their timing was, for the most part, spot on. Their lines were, for the most part, delivered well and with good accents. The reaction shots were very funny, and they seemed to be enjoying their characters and going with the flow. This is a good thing; when actors have fun with what they are doing, that fun is communicated to the audience and everything builds.

The ensemble for Run for your Wife was also very strong. In the lead positions were Tom Lund (FB) as John Smith and Wade Bradford (FB) as Stanley Gardner (pictured to the right — image snarfed from Facebook). Lund (who we’ve seen before in the REP productions of Journey’s End and Laramie Project) played the harried taxi driver very well, and very strong in his reaction shots. He had a casual easygoing nature, but seemed quick on his feet. Still, it was difficult to see what both of his beautiful “wives” saw in him, but that seems to be a common problem with productions of this show :-). Bradford also did very well, comfortably switching between accents and voices, and playing the different personas he had to project very well. My only problem with Bradford’s character was his makeup — the facial hair just seemed off and odd to me. But that’s a minor complaint — he had great timing, great reactions, and was just having fun.

Also having fun were the two wives. As the Wimbleton wife, Mary Smith, Kamber Grace Moen/FB was a joy to watch, and not just because she’s very pretty. As with the rest of the ensemble, she had great timing and comic reactions, and interacted well with the other characters. The Streadham wife, Barbara Smith, was played by Bea Schreiber/FB. Schreiber had a very different look than Moen — both beautiful, but with a different build and different facial reactions. Again, as with the rest of the ensemble, Schreiber had great timing and comic reaction. According to the write-ups of this play that I have seen, Mary was supposed to be more straight-laced, and Barbara more sexually charged. Looking at the actresses, I wonder how the humor would have changed had the actresses been swapped in the two roles, raising the question of how looks might influence our perceptions of characters. Ah, well, this is farce. I shouldn’t try to think too much, should I?

The set for Run for your Wife was designed by Brian Maly and Doug Holiday/FB. The set worked well enough, although it could have used a stronger differentiating colour scheme between the two flats. The sound design by William Davies/FB worked well with good sound effects. The lighting by Brian Maly was also reasonably good. Caroline Morgan/FB was the stage manager.

As I noted early on, this production was at the Canyon Theatre Guild (FB Group) in Newhall… so I’d like to say few words about the Canyon Theatre Guild itself, as this was our first time there. CTG is at the other end of the block from one of our favorite theatres, REP East Playhouse. The two are different in a number of ways. REP productions use predominately Equity, SAG, and other actors who work in theatre, and take place in an 81-seat “black box”. CTG is formally more at the “community theatre” level — they draw from skilled amateurs combined with aspiring professionals, with a house that is significantly larger (I’d guess 3 times larger). Luckily, CTG has been doing theatre in Santa Clarita for a long time (42 years, in fact), and has a great pool of talent from which to draw (in fact, many actors perform at both REP and CTG). Although the basic CTG facility is very nice, the seating at CTG looks to be former movie theater seating, including the drink holders in the armrests and the plastic seatbacks, and the rake of the seating flattened out near the roof (reducing sight lines). Canyon Theatre Guild does an interesting mix of shows — primarily popular musicals and plays. I’ll keep an eye on them, and we may be back for a future production.

There is one more weekend for Run For Your Wife and its co-production, Suessical – The Musical. Tickets are available from the CTG box office at (661) 799-2702. Run has two performances left: Friday 2/22 and Saturday 2/23 at 8pm; Suessical has one performance left on Saturday 2/23 at 2pm. CTG often puts their shows up on Goldstar, although I don’t believe there are offers active for these shows currently. Upcoming at CTG is the musical “Hairspray”, running Mar 23rd 2013 to Apr 27th 2013, the comedy “The Fox on the Fairway” running May 24 – June 22, 2013, and a new version of “The Little Mermaid” running May 25-June 23, 2013. CTG will also be producing the regional premiere of Les Miserables at the Santa Clarita Performing Arts Center running July 20, 2013 – August 11, 2013. CTG also has an extensive education program.

Upcoming Theatre and Concerts:   Next weekend brings  “The Snake Can” at the Odyssey Theatre (based on an ad that caught Karen’s eye in the latest Footlights). Karen (but not me) will be seeing “When You’re In Love The Whole World is Jewish” at the Greenway Court Theatre on Feburary 21. March starts with “I’ll Be Back Before Midnight” at the Colony. The following weekend sees us in North Hollywood for “Company” at the Crown City Theatre. The third week of March takes us to the Pantages and Hollywood for  “Catch Me If You Can”on March 16. The fourth week of March brings “Boeing Boeing” at REP East on March 23. March may also bring “End of the Rainbow” at the Ahmanson, most likely on March 30. April will bring the Southern California Renaissance Faire , “Grease” at Cabrillo Music Theatre, and a winetasting at Temple Ahavat Shalom. May is also busy, with two concerts — Elton John in Las Vegas on May 4, and (tentative) Michael Feinstein at VPAC on May 11. May may also bring “Falling for Make Believe” at The Colony Theatre, “To Kill a Mockingbird” at REP East. Lastly, continuing the look ahead, June will bring (tenative) “The Scottsboro Boys” at the Ahmanson Theatre, “Priscilla – Queen of the Desert” at the Pantages, (tentative) Sweet Charity“ at DOMA, and the Western Corps Connection at the end of the month. I’m also keeping my eyes open as the various theatres start making their 2013 season announcements. Lastly, what few dates we do have open may be filled by productions I see on Goldstar, LA Stage Tix, Plays411, or discussed in the various LA Stage Blogs I read (I particularly recommend Musicals in LA and LA Stage Times).