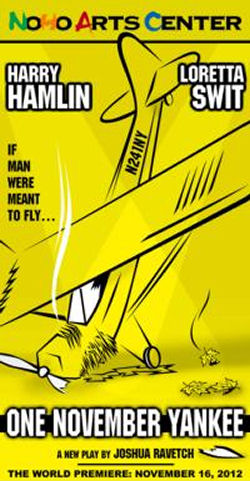 Last year at this time, a little play was running at the Pasadena Playhouse that asked the question, “What is art, and why do we consider it art?” The art in question then was a painting that consisted of a white background, upon which there are some faint white diagonal lines. Last night at the NoHo Arts Center the play “One November Yankee” (1NY) by Joshua Ravetch asked a similar question. The difference is that in “Art“, the focus was on the reaction to the artwork.  In 1NY, the focus is more on the history behind the artwork, and the relationship between brothers and sisters. We enjoyed the production, and it was a nice change of pace from the musicals we usually see. Alas, you won’t be able to see it, as last night was the final performance 🙁 ; but the good news is that the film rights have been acquired, so you might see it on the big screen.

1NY tells the story of an aircraft, a bright-yellow Piper Cub with tail number N241NY. The play opens at the Museum of Modern Art, where Ralph has been commissioned by his sister, Maggie (a museum board member) to produce an art installation. His result is a reproduction of the hypothesized nose-first crash of N241NY. He based the work on the story of a brother and sister pair that had such a crash five years earlier. Their story of that brother and sister  appealed to Ralph because it paralleled his relationship to his sister. In that story, the brother was a novelist and the sister was a librarian; in the real world, Ralph was the artist, and his sister acquired and arranged the installations of art. Upon seeing the installation, Maggie was disappointed and upset because she thought that a crashed Piper wasn’t art, even if the artist saw it as a metaphor for the crashing of society into destruction and ruin.

The second scene paralleled the first by telling the story of the real crash five years earlier. Margo and Harry were on their way from New Hampshire to their father’s wedding in Florida. Only Margo was going through a divorce and forgot to ensure the fuel tank was full. Shortly after leaving the airport, the airplane took a nose dive into the woods. Harry was injured and unable to walk out. Their discussion after the crash explored the relationship of these two siblings  — their childhood growing up, their hopes and desires, the relationship with their parent. As the scene ended we knew that Harry would not make it out of there alive, and Margo was determined to stay with her brother.

The third scene occurred shortly before the art installation. Another pair of brother and sister hikers, Mia and Ronnie, are hiking in the woods when they come across the wreckage of N241NY. The hike was a way of restoring their relationship after the loss of their older brother, Daniel, in an airplane crash upon takeoff 22 years earlier. Upon discovering the wreckage, Mia and Ronnie start to piece together the story of the crash. Findings include Margo’s wallet, Harry’s remains, books, glasses, watches, etc. Simultaneously to discovering Margo and Harry, they are telling their own story and their relationship to their deceased older brother. As with the previous two scenes, there are loads and loads of parallels between the stories of the siblings. I also had a problem with this scene: namely, would random hikers start taking things from the wreckage and moving it around (including human remains), or would they preserve the scene and just report it to authorities? They did the former, which seems odd to me.

As the play ends, the last scene returns us to the art museum, where the preview has ended and the critical reaction is coming in. Ralph and Maggie are ecstatic, as the reaction has been very positive and the critics saw the meaning Ralph intended. Further, the report of the hikers has come in, and this has magnified interest in the exhibit of the aircraft sculpture. Suddenly there is no question that this is art… but then Ralph discovers a final review that takes the contrary view, lamenting that anyone can throw anything on exhibit, slap a label on it, and call it art. As the play closes and Ralph is turning the lights off on the display, we see Margo enter from stage left, and look wistfully at the play. Is this Margo in real life or Margo as a ghost? We never find out, and the lights go out.

As you can see, this is an interesting story (and perhaps an odd subject for a comedy). At points the writing was rough and unrealistic, and I found the continual parallels between the three pairs of siblings to be a little forced and overdone. Still, I liked the basic story and the rough parallels, and thought the numeric assessment of Bitter Lemons was quantitatively correct–this was a mostly positive production with a few rough spots. It will be interesting to see how this translates into a screenplay.

What made this play work (and what made me originally want to see it) was the acting team. This was a two-hander performed by stage and screen veterans Harry Hamlin and Loretta Swit. These two possessed a wonderful ability to make the three siblings distinctly different characters — from middle ages hikers full of energy, to crash victims, to art student and art buyer. Their performances transcended their age (as did their looks: Hamlin is still as ruggedly handsome as he was in the days of LA Law, and Swit looks nowhere near her actual age of 75 — she looked closer to her late 40s). The two were a joy to watch, and raised the story well above the pedestrian.

Basically, you believe these actors were the characters they were portraying. This was likely helped by the direction provided by the playwright, Joshua Ravetch, who also served as director. However, this may also have been what hurt the play, for the playwright being the director also leads to the situation where it is unlikely the rehearsal and mounting process will results in cuts, trims, and modifications that will improve the show. It didn’t affect the great performances, but did result in the end script probably not been as good as it could have been.

The set design by Dana Moran Williams was simple: a Piper Cub nose-down into the set. I couldn’t tell if it was a fabricated Cub or a real aircraft, which I guess was a good sign. The program made you think it was real, telling the story of how the author and production designer stood on the tarmac at the Santa Paula airport looking at a yellow Piper Cut, and that it was delivered to the theatre on November 1. If real, (a) I wonder how the hell they got it into the NoHo Arts Center; (b) N241NY is not the registration, as N241NY is a Cessna. Surrounding the plane were a few black cubes, augmented by various props. Near the end of the production, I found myself imagining the Pasadena Playhouse producing this and seeing (in my head) how the Playhouse would have set the stage. I mention this because I was surprised to learn while writing this review that this play originated at the Pasadena Playhouse in the Hothouse series. Set construction was by Red Colegrove, with properties coordinated by Janet Fontaine. The lighting design by Colony regular Luke Moyer was also very strong; I particularly liked the oranges and golds in in the Mia and Ronnie scene, and the effective projection background for the Margo and Harry scene. Costumes were by Kate Bergh; they were effective and conveyed the characters very well. Jeff Gardner‘s sound was also noteworthy — not only the flight-themed inter-act music, but the background sounds during the actual crash scenes. The one thing I didn’t get was the odd “pinging” that was playing before the production.  Diana Copeland was the production stage manager. 1NY was produced by Jay Willick and Kevin Bailey. The artistic director for the NoHo Arts Center is James Mellon.

Alas, you can’t get tickets to “One November Yankee“, as last night was the last performance, and there is another production scheduled for the space (“As The World Goes Round”, a Kander/Ebb jukebox musical). It may pop up at another theatre in the future or as a movie.

Upcoming Theatre and Concerts:  Next week is open, and we’re likely taking a break for a week. January 26 take us to Orange County for Triassic Parq–The Musical at the Chance Theatre (Goldstar). February will start with the first play of the REP season, “Putnam County Spelling Bee“.  February 9 might be “Backbeat” at the Ahmanson, but I’m unsure about the show, and Karen is getting theatre-ed out (is that possible?). February 16 brings “You’re a Good Man, Charlie Brown” at Cabrillo Music Theatre, and the last weekend of February is currently open. March starts with “I’ll Be Back Before Midnight” at the Colony. After a break for Fogcon (although I may do something here), theatre picks up with “Catch Me If You Can” at Broadway LA/Pantages on March 16 and “Boeing Boeing” at REP East on March 23. March may also bring “End of the Rainbow” at the Ahmanson, most likely on March 30. April will bring the Southern California Renaissance Faire (huzzah for the $15 Holidazzle sale), “Grease” at Cabrillo Music Theatre, and “To Kill a Mockingbird” at REP East. I’m also keeping my eyes open as the various theatres start making their 2013 season announcements. Lastly, what few dates we do have open may be filled by productions I see on Goldstar, LA Stage Tix, Plays411, or discussed in the various LA Stage Blogs I read (I particularly recommend Musicals in LA and LA Stage Times).