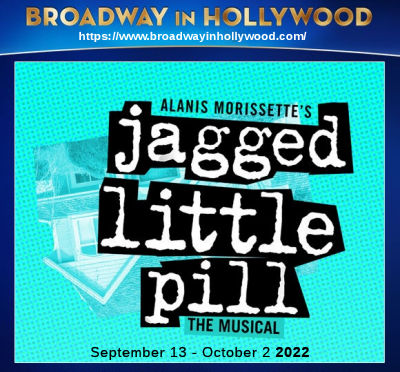 Expectations can often color what you expect as well. When I first learned about the Alanis Morissette jukebox musical, I expected this heavy rock musical, especially with the name “Jagged Little Pill”. I’m an older fart (in my 60s) — my taste in music runs a broad gamut, from Broadway cast albums to folk to classic rock to bluegrass to celtic to dixieland to big band to … well, as you can see, a wide variety. But I had never knowingly listened to Morissette. Her classic album was not part of my vernacular. And although, thanks to the Tony nomination, I had listened to this cast album ahead of time, it hadn’t overpowered the expectation regarding this show. Going in, I was expecting this really hard rock, extremely dark and pulsating show … emphasizing the “jagged” nature of the title. Little did I know that the emphasis was more on the “pill”, as in “Mother’s Little Helper”. Little did I know that the title really referenced a pre-chorus (“Swallow it down (what a jagged little pill) / It feels so good (swimming in your stomach)”) to a key point in this show: “You live, you learn / You love, you learn / You cry, you learn / You lose, you learn / You bleed, you learn / You scream, you learn”.

One more digression before I describe the show … or perhaps it is more of a question: Why do we go to theatre (especially with what it costs these days)? Is it for mindless entertainment? We certainly get that with spectacles like Moulin Rouge, which at the heart of it is all flash and pizazz but no real substance or story. We certainly get that with the movies-to-stage pipeline, which bring familiarity and songs but not much new. But the really successful shows are those that make you think — that touch a raw nerve. That could be the struggles of our nation’s birth, as in Hamilton, or it can issue like sexuality as in the recent The Prom or Spring Awakening. Do we go for the comfortable, or do we go because the purpose of theatre is just to make us uncomfortable, to hold up that mirror, to make us think. (and we’ll revisit this again next week when we see Daniel Fish‘s interpretation of Oklahoma at the Ahmanson Theatre (FB) next week).

This brings us back to Jagged Little Pill. First and foremost: Discard your expectations. This is not hard rock like American Idiot or Hedwig. This is more angsty ballads. As for the show itself: yes, it is dark. I’d characterize it best as a blender mix of Spring Awakening and Next To Normal. The subject matter touches on a number of triggery areas: drug abuse, rape and sexual assault, how we react to such assault, expectations on children, teen sex, gender issues. If these are triggers to you, be prepared. But the show handles them in a somewhat SFW combined with in-your-face manner. I didn’t find it too strong, but others might.

The show tells the story of the Healy family: super-mom Mary Jane, workaholic dad Steve, overachiever child Nick, and adopted minority child Frankie. Just from that description, what could go wrong. We learn over the course of the show the jagged little pill that this facade covers. This is told through the use of the Alanis Morissette‘s catalog, primarily her album Jagged Little Pill (Glen Ballard also worked on the music, the book was by Diablo Cody, and additional music was by Michael Farrell and Guy Sigsworth).  I don’t want to give too much away of the plot, but given the warnings and the description of the family, you should be able to figure out the eventual arc.

This brings us to the first assessment: story and music. I should note that this assessment is tempered a bit by poor sound, which I’m going to blame on the touring company as I know that BIH can get it right. Especially during the musical numbers, the lyrics were muddied (perhaps folks were mic-ed bad, or perhaps speakers were misaimed or mistuned). I could hear dialogue just fine. Now, if you’re younger and you’ve memorized these songs, that probably didn’t matter. But if you’re an old fart, it made the lyrics inaccessible with just snippet here and there. You get the sense but not the specifics. My advice: Try getting the headsets for the hard of hearing. You’ll probably get better sound.

That said: I found the story engrossing and relatable. There were things in this story that hit home for me, and I’m sure others as well. No family is perfect, and this showed how our experiences shape us. Not just the successes, but especially the failures. Where we fail. Where others fail. The Jewish High Holy days are coming up, and this is something I’ll be thinking about: how can I learn from my failures. This show raises those questions. That’s a good thing.

The show also touches on a number of hot topics today: sexuality and gender; sexual assault, consent, and who you believe; the current opioid epidemic; and what pressure does to us. That it raises these questions and provokes discussion places this head over heels a spectacular like Moulin Rouge. For story and subject along, this is a must see.

Now we have the next assessment: vision and execution. Diane Paulus‘s original direction, and Sidi Larbi Cherkaoui‘s original movement and choreography do a good job of bringing out the emotion. Place and mood is does through either projections or screens as opposed to traditional fly-scrims. This works well to immerse you in the story.

The last assessment is performance. Here I’d like to note a number of standouts. Heidi Blickenstaff (Mary Jane Healy) amazes me with her voice and her emotion. She conveys a wide range here, with a voice that handles both rock and soft well. Those who have been following her career know this well, from her first foreys with [Title of Show] to her performance in Freaky Friday. Her performance is remarkable. Also strong is Lauren Chanel (Frankie Healy), who really brings that character to life. Jade McLeod (Jo) is remarkable in “You Oughta Know”, and Allison Sheppard (Bella) does a wonderful job of leading the company in “No” (which should be a watchphrase for today: What part of “no” do you not understand). For the guys, I was really taken by Chris Hoch (Steve Healy), who reminded me a lot of the dad in Next to Normal. Dillon Klena (Nick Healy) was also strong.

I’ll note: For this writeup, I have not done my usual hyperlinking of artists. I may go back and fill that in. Not doing it saves a lot of time.

For right now, we’re pretty much sticking with shows that come as part of our subscriptions or are of interest through our memberships. Looking ahead for the remainder of 2022:, the remaining September shows are Andrew Lippa’s version of The Wild Party at the Morgan Wixson Theatre, and Oklahoma at the Ahmanson Theatre (FB). October will bring Sanctuary City at the The Pasadena Playhouse (FB), Ghosts at the Odyssey Theatre Ensemble, The Addams Family at 5 Star Theatricals (FB), and To Kill a Mockingbird at Broadway in Hollywood (FB). November brings 2:22 – A Ghost Story at the Ahmanson Theatre (FB). Lastly, December will bring Annie at Broadway in Hollywood (FB).