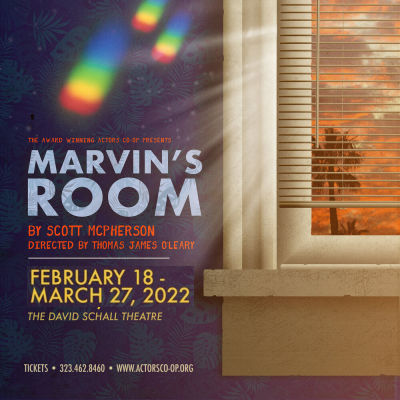 The last few times I’ve gone to the theatre it’s been strange. Either I went without my usual theatre companion, because she was in the hospital, or I had to navigate handicapped access at the theatre. This is because my wife (my regular theatre companion) fell in mid-November, and after a few weeks in the hospital, has been in a wheelchair ever since. She just got the clearance last Thursday to start putting weight on the leg; she won’t be walking normally for a while. This has put me in the position of being her caretaker, on top of my normal work and volunteer activities. It also means I’ve doing everything around the house. It’s exhausting.

Why do I mention all this in a theatre writeup? Last night, we saw a show at yet another of our subscription venues that is coming back to life. This time it was our intimate theatre subscription at  Actors Co-op (FB), which is on the grounds of First Presbyterian Church of Hollywood. The show was the show that was just about to go on when the world shut down: Marvin’s Room,  written by Scott McPherson, directed by Thomas James O’Leary. I’m not sure I would have gotten it then. I get it now (after a bit of thought).

This is because Marvin’s Room is, at its heart, about caregivers.  In one corner we have Bessie (Francesca Casale), who has given up her life for the last 20 years to take care of her father, Marvin, and her Aunt Ruth (Crystal Yvonne Jackson). Marvin has been living with a number of medical complications: diabetes, a stroke, and much more. Ruth is in better shape, but has been dealing with constant pain and dementia. In the other corner we have Bessie’s estranged sister, Lee (Tara Battani). Lee is also a caretaker, but in the other direction: she’s taking care of her two sons: Hank (Dean Hermansen) and Charlie (Marek Meyers). Lee also has her hands full: Hank is in a mental institution after setting their house on fire, and Charlie (who looks up to his brother) has retreated into books.

Normally, the worlds of these two related caretakers would not collide: one is in Florida; the other has retreated to Ohio. However, there arises the age-old question: who takes care of the caretaker? In this case (and the precipitating incident for the play) is Bessie being diagnosed with Leukemia. She needs a blood marrow transplant, and who better than her sister and her family. When these groups are brought together, we see the different ways that the sisters have dealt with their caregiving: Bessie does it through patience and love; Lee does it through anger and drowning her sorrows. The problem is that approaches that work for one doesn’t work for all. It turns out that Bessie has the approach that can get through to Hank. Through that approach, we see the sisters come together.

On the surface, play is loaded with jokes,  and quite a few of the characters — in particular Aunt Ruth and the supporting characters Doctor Wally (Brian Habicht) and Doctor Charlotte / Retirement Home Director (Kimi Walker) — are played more as caricatures for the broad humor. The jokes keep the level of entertainment up. But it is the characters that sustain it. Figuring out the point of the story was a bit harder. As I left, I was unsure what the story was about or what the point was. But I let it cogitate in my head — I did my headlines post and updated the highway pages — and as I reread the synopsis it came to me.

There are two key messages in this play. The first is about approaches to caretaking. One can approach it with humor and patience, taking things one day at a time. This was Bessie’s approach (and in many ways, the approach I take). But it is tiring, and it takes something out of you. Lee had a different approach. Hard, pushing those in her care away. She didn’t want to deal with the problems. For her, the answer was in letter her guard down, and seeing those in her care (and who cared about her) as people.

The second message in the play was about who takes care of the caretaker. This is a joke I’ve had with my wife: can you finally get well so I can get sick? A big fear of a caretaker is who will take care of your charges and responsibilities if you get sick. Both Bessie and Lee had this issue. Bessie was worried about the older generation, and she wanted to retain the control (eschewing a retirement home). Lee was worried, but in a different way. You got the sense that Lee’s life was defined by the care she was given, even if she was angry about it. She was scared more of being alone.

These came together in the moment when the two sisters put down their guard and actually talked to, as opposed to at, each other. I think in that moment, they saw each other. That different form of care is what elevated this play.

We’ve had two plus years of taking care of each other, and we’re tired. We’re worried what will happen to us if we aren’t there to take care of those we love. Perhaps the delay in the presentation of Marvin’s Room made the presentation more timely than the Actors Co-Op team knew when they made the selection.

I still, however, want to see what would have been the remaining play in their season, the musical A Man of No Importance.  Maybe it will be in the 2022-2023 season.

The performances in the production were strong. I’ve listed most of the cast above. I particularly liked the performances of Francesca Casale, who really brought Bessie to live, and Dean Hermansen, who captured both the anger and the depth of Hank.

Rounding out the cast was Justin Bowles Marvin/Bob.

A few additional caregiving notes: The support from Actors Co-Op for the handicapped access was great. A bit weaker was their COVID protocols: they did require vaccinations 👍🏼 and masks 👍🏼, but also accepted proof of negative testing 🤷‍♂️ and a statement of acquired immunity 👎🏼. I’m lukewarm on that last one, but I understand their audience and luckily the numbers are going down. They did have an announcement about keeping masks on, but did not check ID/vaccination status trusting people on their word. In a theatre crowd, that’s likely OK… but I would have been more comfortable if they had checked. Hopefully, they can get a checking protocol in place for future performances. The program does not credit a COVID compliance officer or COVID coordinator — that could be part of the problem 🤔.