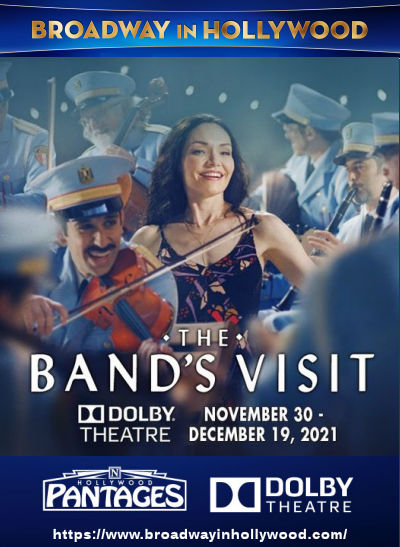 Those are not things you associate with a Tony-award winning Broadway musical. When you think of Broadway, you think of high kicking dance numbers. Lots of energy. Lots of volume. Something happening in every minute. Long leggy dancers. Big bands.

That’s not The Band’s Visit, which we saw last night at the Dolby Theatre as part of Broadway in Hollywood.

The Band’s Visit is best summarized by the opening projection, which is also said at the end of the show: “Once not long ago a group of musicians came to Israel from Egypt. You probably didn’t hear about it. It wasn’t very important.” What distinguishes this show is the quiet. The show is not afraid of silence; there’s quite a lot said in the pauses. That particular message is very important right now. We are all going crazy with the ongoing stress and fatigue of COVID, of politics, of conflict, of hostility, of partisanship. What we need to do is appreciate the quiet, to get the most out of our pauses.

This musical tells the story of The Alexandria Ceremonial Police Orchestra, which was invited to perform at an Arab cultural center in Petah Tiqva. However, when getting their bus tickets, they get tickets for Beit Hatikva. This is a speck of concrete in the middle of the desert.  They spend the night with the villagers, and then go on their way and perform their concert.

That’s it. That’s the story. Two groups of strangers getting to know each other, and then moving on.

As the musical unfolded, I found myself enveloped by the difference of this musical. It relaxed me; it pulled out the stress in a different way than Head over Heels had the week before. Yet I found myself leaning forward and smiling (under my mask). I was also enthralled by the portrayal of the people. When we think of the conflict in the Middle East, we often think stereotypically of the strongly religious. That’s not present here. We see people. Secular folks, running cafes, going out to eat, playing music, taking care of families, dealing with family issues. The only hint of religion is the mezuzah on the cafe door. The story forces us to see people as people, and not through the lens of religion and politics. In these polarized times, perhaps that’s worth remembering.

One post show musing I had regarded the subsequent life of this musical. On the surface, it is deceptively appealing: a small cast, not a lot of technological tricks. Few curse words. But will it success in the regional and school circuit? It requires actors that can speak not only English but Hebrew and Arabic. It requires folks that can play some odd instruments. It has that odd sort of quirky draw similar to another Tony award winner, Once. I’m not sure this will make it on the regional circuit. Translation: See this now while it is on tour, or you may be waiting a while.

The Band’s Visit is based on the 2007 screenplay by Eran Kolirin, with a book for the stage by Itamar Moses. Music and lyrics are by David Yazbek, and sound very different than other shows of his such as The Full Monty, Dirty Rotten Scoundrels or Women on the Verge of a Nervous Breakdown.

The performances were uniformly strong, let by Janet Dacal Dina and Sasson Gabay Teqfiq. I had heard Dacal before on the Wonderland album, and I have the recording of her solo album. She has a lovely voice, and brought a nice depth to the performance. Gabay played the role in the original screenplay, and brought a night level of formality and warmth to the role. But the cast, as a whole, was an ensemble. Other than the leads, it was difficult to single out any performance. The remainder of the cast at our performance was: Joe Joseph Haled; Clay SInger Itzik; Yoni Avi Battat Camal, 🎼 Violin; Coby Getzug Papi; Joshua Grosso Telephone Guy; Kendal Hartse Iris; David Studwell Avrum; Billy Cohen Zelger; Layan Elwazani Julia; Nick Sacks (in for Marc Ginsburg) Sammy; James Rana Simon; Hannah Shankman (in for Ariel Reich) Anna; Roger Kashou 🎼 Darbouka/Riq; Brian Krock 🎼 Clarinet / Saxophone / Flute; Kane Mathis 🎼 Oud / Guitar; Wick Simmons 🎼 Cello. Other standbys were Ali Louis Bourzgui, Loren Lester, and Dana Saleh Omar. 🎼 indicates on-stage band members. I’ll note I was a bid sad not to see Marc Ginsberg; we’ve seen him in numerous 5-Star/Cabrillo productions and the in LA Premier of Levi – The Musical. Also interesting is the large number of Los Angeles locals in the cast (such as Dacal, Getzug,  Ginsberg, Lester, Omar) and CMU alumni (Singer, Grosso, Sacks).

Turning to the production and creative side: In terms of performance design, the production was directed by David Cromer, and choreographed by Patrick McCollum. Of course, they don’t go on the tour, so credit for keeping the tour fresh goes to Seth Sikes Associate Director; Jesse Kovarsky Associate Choreographer; and Hannah Shankman Dance Captain.  Also pretty significant was Zohar Tirosh-Polk Israeli Dramaturg / Dialect Coach and Lamia Bensouda Arabic Dialect Coach. The stage design team consisted of Scott Pask Scenic Design; Sarah Laux Costume Design; Tyler Micoleau Lighting Design; Kai Harada Sound Design; Charles G. LaPointe Hair and Wig Design. As with the story, the stage design was similarly understated. There were well worn buildings, well worn living rooms, a well worn cafe. The costumes were well-worn for the residents, the band was in uniform. Lighting was often subdued. Sound was clear; this was a show that benefitted from being in the Dolby with its clear and crisp sound (it would have suffered in the Pantages, which swallows sound). The scenic design elements worked well. Rounding out the production team were: John M. Atherlay Production Stage Manager; Nikki Lint Stage Manager; Sean Francis Patrick Asst. Stage Manager; Tara Rubin Casting Casting; Foresight Theatrical Management Consultant; Chris Danner Company Manager; Justin T. Scholl Asst. Company Manager; Bond Theatrical Marketing and Publicity Direction; The Road Company Tour Booking. There were loads and loads of producers. I always give credit to the COVID Safety Team: Toni Ostini Tour COVID Safety Manager; and … well … the Broadway in Hollywood staff directory does not give a credit for their COVID safety team. They should. They are what keeps the theatre open.

One last thing, if the Broadway in Hollywood (FB) staff read this: The show needs a pre-show announcement about keeping your masks on during the show, and keeping any light emitting and sound emitting devices off. Audiences have been out of the live theatres for so long they have clearly forgotten the protocols, and mask reminders keep everyone safe.

Ob. Disclaimer: I am not a trained theatre (or music) critic; I am, however, a regular theatre and music audience member (modulo the COVID break). I’ve been attending live theatre and concerts in Los Angeles since 1972; I’ve been writing up my thoughts on theatre (and the shows I see) since 2004. I do not have theatre training (I’m a computer security specialist), but have learned a lot about theatre over my many years of attending theatre and talking to talented professionals. I pay for all my tickets unless otherwise noted (or I’ll make a donation to the theatre, in lieu of payment). I am not compensated by anyone for doing these writeups in any way, shape, or form. I currently subscribe at 5 Star Theatricals (FB), Broadway in Hollywood (FB), the Ahmanson Theatre (FB), and we have a membership at The Pasadena Playhouse (FB). We were subscribing at Actors Co-op (FB) and the Musical Theatre Guild (FB) prior to COVID; they have not yet resumed productions. We have also been subscribers at the Soraya/VPAC (FB), although we are waiting a year before we pick that up again. Through my theatre attendance I have made friends with cast, crew, and producers, but I do strive to not let those relationships color my writing (with one exception: when writing up children’s production, I focus on the positive — one gains nothing except bad karma by raking a child over the coals). I believe in telling you about the shows I see to help you form your opinion; it is up to you to determine the weight you give my writeups. Note to publicists or producers reading this: here’s my policy on taking comp tickets. Bottom-Line: Only for things of nominal value, like Fringe.