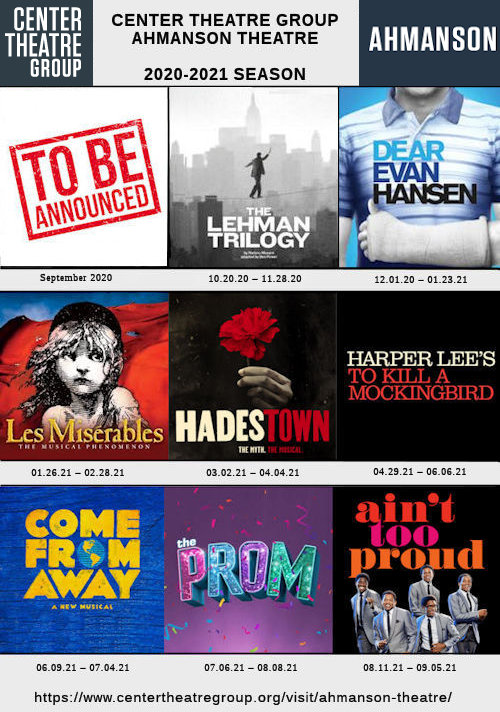 Well, the Ahmanson has announced their 2020-2021 season and… well, it’s better than their 2019-2020 season. That season had a lot of problems, with two one-person shows and a number of shows I had no interest in seeing. For the upcoming season, at least there aren’t any one-person shows. But there are so many encores that I’m still not sure it is worth subscribing, especially with the quality of the Mezzanine seats and the availability of the AmEx Presale (as well as how poorly the Ahmanson treated their subscribers vs. the Pantages/Broadway in Hollywood)*. Here’s the season and my thoughts (🎶 indicates musical; 🎭 indicates a play; and 🔁 indicates “encore performance”):

Of these, the ones that I want to see are Hadestown, Mockingbird, and The Prom. Although we saw it the last time we were at the Ahmanson, we’ll want to see Come From Away again, simply because my wife likes that musical so much. But as for the others: We weren’t that impressed with Dear Evan Hansen, despite all the buzz. We saw Les Miz when it was at the Pantages in May. Lastly, we saw Ain’t Too Proud when it had its pre-Broadway run at the Ahmanson, and I don’t have the strong urge (based on that) to see the post-Broadway changes in a jukebox musical.

That leaves The Lehman Trilogy, which is a maybe and depends on scheduling. I’ll note that it is during a period when both the Ahmanson and Dolby are dark.

*: The last time we subscribed to the Ahmanson, for the lowest priced tier, they shuffled us off to a Friday night claiming no subscriptions were available for Saturday nights. Friday nights were a pain to get to. I seem to recall they didn’t have the clearest system for changing seats. For 2020-2021, we’re interested in 4-5 of the 8 announced shows. If they have good prices and dates for the season, and we can get a decent side mezzanine price, subscription is a possibility, although they seem to save those seats for open sales. At that point, we might just as well wait for the Amex Pre-Sale and get the seats when they first go on sale. Their subscription plan, according to their site, is for the six season shows (Lehman, TBA, Les Miz, Hadestown, Mockingbird, and Prom) plus one encore show. That’s a possibility, although I have no desire to see Les Miz again.

ETA: Subscribing is a clear example of how the Pantages knows how to treat subscribers, and the Ahmanson does not. When you subscribe at the Pantages/Broadway in Hollywood, you can pick which week of the run you want and which night, pick your seats, and set it up with a 10 payment plan all from the web. With the Ahmanson, you can only pick the day of the week — no choice on which week of the run. You can’t pick your seat — only the seating area, and there is no seat map made available. And if you want to do something other than pay it all in one lump sum, you have to call Customer Service. Which I will do tomorrow.