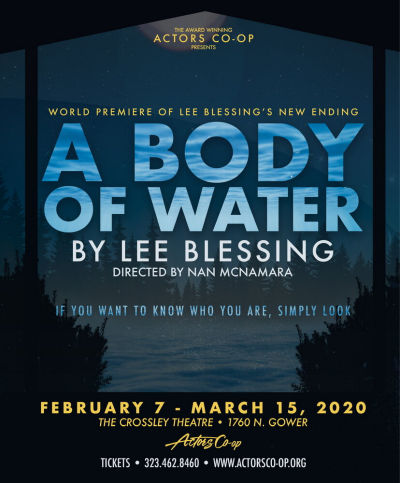 That’s the one-word description of Lee Blessing*’s play “A Body of Water“, currently at Actors Co-op (FB) in Hollywood, that I’ve seen most often in other write-ups of the show. That’s certainly how we felt as we left the performance, scratching our heads along with other audience members, as we tried to figure out exactly what it was that we just saw transpire over 90 minutes (no intermission).
(*: And a note to Mr. Blessing: Your personal website, leeblessing (dot) com, which comes up on a Google search, is infected with drive-by loading malware that my malware scanner caught. You need to fix that ASAP. Non-technical folks: Check your websites regularly.)

Here’s the teaser that Actors Co-Op uses to describe the show:

What if you awoke to find yourself married to someone you didn’t know? With a daughter you’ve never met? And what if you spent each day re-learning things about your past that only proved you never really knew what your life was like?

Going through a number of other reviews and combining things, here’s a bit better of a synopsis:

An attractive fifty-ish couple, after waking up in the same bed, are having coffee in the living room facing spectacular views of hills and a lake. The trouble is, that neither the man or the woman know who they are and how they got here. They don’t know their names, whether or not they’re married or whose house this is. The mystery about who’s who and what it all might mean mean unravels or, to be more precise, deepens, with the arrival of a third character — a young woman named Wren who could be their daughter, the lawyer defending them against accusations that they’ve murdered their daughter, or their long time caretaker. Telling them she’s been conducting this grilling and drilling for weeks and years, she hands him a wallet and her a handbag, as well as couple of possible answers as to who they are. One is that she is, as they suspected, their daughter; the other is that she is a defense lawyer trying to get to the bottom of a young girl’s murder and Avis and Moss (as we learn are the names of the man and the women, perhaps) are the girl’s parents and also the prime suspects. Wren has a couple other questionable revelations up her sleeve that leave Avis and Moss even more befuddled  Over the course of what could be multiple days, Wren presents various scenarios for why Avis and Moss are trapped in their state of living without memory. But we never seem to learn the definite answer as to what the truth is and why they are there.

The play itself is fascinating to watch as an audience member, as you’re constantly with the characters in trying to figure out what the hell is going on. The problem is that, again, just like the characters, you never do. You walk out of the play as puzzled as you were when is started. Did they kill their daughter? Were there auto accidents? Was it just dementia? Was this purgatory? Were they political prisoners (after all, they were outside the village)? Who is Number Six? You are Number One. Oh, right.

I can certainly see why Actors Co-Op wanted to do this piece. Under the direction of Nan McNamara (FB), this is an actor’s and director’s dream. You get to imagine what you want and create a memory piece. You have character with lots of emotion, and a wonderful acting exercise. You just don’t have a story that goes anywhere, or that leaves you in a different place from where you started. But performance-wise, it’s wonderful.

So, focusing solely on the story aspect of this piece, my response is… eh. I hope that Blessing doesn’t subject the new writers over in the Skylight program to this. This has a supposed new ending, but that makes me only question the original ending, which must have been equally worse. This is not a play I can particularly recommend for the story. But it is also a clear demonstration of why I do subscribe to theatres: to see the plays that I might not normally pick for myself. Often, you get a winner you might never have discovered. Sometimes, you get one that is a klunker for you, but perhaps others like it. At least we got to see some excellent performances.

As our befuddled couple, Treva Tegtmeier (FB) Avis and Bruce Ladd (FB) Moss are believably a couple, and portray the sense of confusion well. They capture well the range of emotions one would expect in such a situation: anger, confusion, loneliness, fear, and so forth. They believably fall into the various situations proposed or set up by the (supposed) (daughter or lawyer) Wren. As for Wren, Ivy Beech (FB) also does a good job of capturing the range of emotions one would expect in that character from anger to exasperation to care and concern. Absent the totally confusing story, the characters are played well.

Rich Rose (FB), assisted by Mateo Rudich,  has created an elegant scenic design that adds plausibility to the background story of Avis and Moss in terms of their social and economic position in society. It is a beautiful household setting with lovely modern furniture. This design is supported by the properties design of Lori Berg (FB).  Nicholas Acciani (FB)’s projection design seemed primarily to be a rippling water effect that didn’t add much to the design; more annoyingly, the light from the projector shone right into our eyes. A similar problem existed with  Andrew Schmedake (⭐FB)’s lighting design: the leikos across the stage from the seats behind the box office had a tendancy to shine into the eyes of the audience. So although the lights established the mood well, they made it hard to watch the action. Warren Davis (FB) ‘s sound design established the woods and exterior items well, although some of the insect sounds were a bit towards the audio feedback level.  Paula Higgins (FB)’s costumes were appropriate for the character’s station. Other production credits: Francesca Patrón (FB) Director’s Apprentice; Richard Soto (FB) Fight Direction; Nora Feldman Publicist; Kay Bess (⭐FB) Production Manager; Shawna Voragen (FB) Stage Manager; Katie Lee Merritt Asst. Stage Manager; Crystal Jackson (FB) Producer; and Heather Chesley (FB) Artistic Chairwomen.

A Body of Water continues at Actors Co-op (FB) through March 15. TIckets are available through the Actor Co-Op website. Discount tickets may be available through Goldstar. We’re Actors Co-Op subscribers, and normally I would recommend their shows. This show has great acting — and is worth seeing if you want to see some quality actors from the Actors Co-Op acting company. But the story itself is irritating and confusing, and you’ll walk out a bit befuddled. If you enjoy the thought questions that go with something like that, you’ll enjoy this. But if you are looking for something that goes from Point A to Point B in some form of logical progress — in particular, if you want that Point B to be different than your starting Point A, then this likely isn’t the show for you. Get tickets to Man of No Importance, which Actors Co-Op is doing later in the season, instead. That should be a great show.

Sunday night brought It Shoulda Been You at Musical Theatre Guild (FB) — that’s next on the writeup stack. Next weekend is crazy, as it brings  The Simon and Garfunkel Story at the Hollywood Pantages (FB), Escape to Margaritaville at the Dolby Theatre/Broadway in LA (FB), and Step Afrika at the Soraya/VPAC (FB). Yes, that is the Pantages and the Dolby the same day — that’s what I get for not entering season tickets on my calendar before ticketing a bonus show. The last weekend is open, but I’ll probably find some theatre in Madison WI when I’m out there; alas, I’ll be missing both Nefesh Mountain at Temple Israel of Hollywood and Tom Paxton and the Don Juans at McCabes.

March starts with Passion at Boston Court (FB) the first weekend. The 2nd weekend brings the MRJ Man of the Year dinner (and The Wild Party at Morgan Wixson). The 3rd brings Morris’ Room at Actors Co-op (FB) ; and the last weekend brings Spongebob Squarepants at the Dolby Theatre/Broadway in LA (FB) and the MoTAS/TBH Seder. April is similarly busy: the 1st weekend is Mamma Mia at 5 Star Theatricals (FB); the 2nd is during Pesach and is open (but has Count Basie at the Soraya/VPAC (FB) the Thursday before); the 3rd is Once on This Island at the Ahmanson Theatre; the last is Hamilton at the Hollywood Pantages (FB) (and possibly Hands on a Hardbody at the Charles Stewart Howard Playhouse (FB)), and the first weekend of May is Mean Girls at the Dolby Theatre/Broadway in LA (FB)