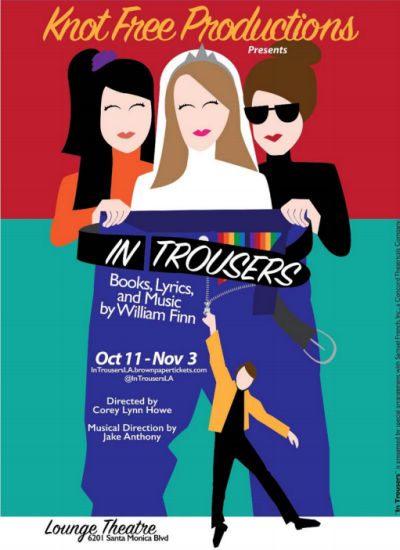 Back in 1979, the world met Marvin for the first time.

Who is Marvin, you might ask? Perhaps you’ve heard of the musical Falsettos, by William Finn. It was recently at the Ahmanson. Falsettos told the story of Marvin, a man whose marriage came apart when he told his wife, Trina, that he was homosexual. The two act musical chronicles the aftermath of the breakup, how they raise their child, and Marvin’s new relationship with Whizzer Brown. The musical was constructed out two one act musicals that Finn had written: Falsettoland and March of the Falsettos.

But those musicals were not where we first meet Marvin. Marvin first showed up in the 1979 musical In Trousers, which captured when Marvin realized he was gay. It was produced a few times in 1979, and reworked in the mid-1980s, which is when it was last done in Los Angeles. I got the cast album for In Trousers way back in 2011, and so it was on my list of “shows I had heard, but never seen”.

When I learned from the show’s publicist that it was being done this fall in Hollywood, I made the effort to get some tickets. So guess where we were Sunday afternoon? At the Lounge Theatre (FB) in Hollywood seeing In Trousers.

First and foremost: A tip for those going to the Lounge: Do not sit in the front row. The air conditioning will blow straight onto you, and you will freeze your tuchas off. We found out the hard way, and now I’m like the Old Lady in Candide, because one buttock was frozen off.

In Trousers tells the story of the women in Marvin’s life: his high school sweetheart, his teacher, and his wife. It is essentially him recalling how those relationships started and ended, and how he decided he prefers men. Allmusicals.com summarizes the plot as follows:

The plot is concentrated on Marvin’s thoughts. He keeps thinking about his true orientation. He cannot decide, whether he is a homo or a bi. To find this out, Marvin recollects all the past events starting from his childhood. He keeps immerge into his memories step by step. First of all, the main character remembers his previous relationships. They were various. Among them, there is one school love. He was also deeply attached to his English teacher, called Miss Goldberg. He recollects, how she once has proposed him to play Christopher Columbus in one of the plays staged at school. Then these memories go away. The main hero is upset. It is really hard for him to decide. On the one hand, he wants to be happy, but on the other hand, he does not want to disappoint and ruin his family and life. His feelings and worries are the key features of the plot. Finally, Marvin makes the most important choice in his life. He admits that he wants to be only with men. The main character leaves his wife and son in order to spend his life with the dear and delightful “Whizzer” Brown.

In many ways, however, that summary is simplistic. Watching the show, I didn’t get the impression that Marvin cared all that much about the feelings for his wife or the other women. He really only cared about himself (in fact, it isn’t until the Falsetto-era one acts that we see Marvin maturing out of the man-child he was). Marvin wants to rape his teacher (she rebuffs him), and I don’t think he knew what he wanted with his wife.

As such, the story in the play is a bit jumbled. You get the impression of who Marvin is, and why he is what he is by the later shows, but you can also clearly see why this particular show wasn’t incorporated into the larger story of Falsettos.

I’ve seen some writeups that talk about this show is about the journey of finding oneself. I didn’t see that. I saw it more about the collateral damage that happens as someone tries to face the truth about themselves. I’ve seen some summaries of the show that characterize the women as shrews. I didn’t see that either: I saw women standing up for what they wanted in a relationship. To some men, women standing up for what they want is perceived as shrew-ish, but is it in reality? This in someway is the central problem with the story: Marvin is a child who is fighting growing up into himself: children have trouble knowing what is right for them, and often don’t care about the damage that happens around them.

With respect to the title: My wife points out that children wear short pants; adults wear trousers. At the beginning of the play, Marvin wants to wear the trousers, but can only pretend. By the end, he has grown into the trousers.

I am pleased to say that, under the direction of Ryan O’Connor (FB), the performances were generally strong.

As the wife, Tal Fox (FB) was strong. We’ve seen Fox before at the dear departed Chromolume Theatre. She is a strong performer and a strong singer, and brought great characterization to “I’m Breaking Down” (which was originally part of In Trousers and later shifted to Falsettos). I enjoyed her performance, although my wife commented that at times she overpowered the music, and at time it overpowered her, but I didn’t hear that.

For the high school sweetheart, the normal actress (Lea Madda (FB)) was out, and we had the female cover, Brooke Van Grinsven (FB). We’ve seen Van Grinsven before as well, in both Drowsy Chaperone and That Lovin’ Feeling. She had a really strong voice, and captured all the confusion of the character well (and was fun to watch for her expressions).

Lastly, his teacher, Miss Goldberg was played by Michelle Lane (FB), who was new to us. She performed well, and did a great job on “Set Those Sails”.

Lastly, there was Braxton Molinaro (⭐FB) as Marvin.  I found Malinaro’s Marvin to be a bit detached: I got the confusion, but not the passion. He had a good singing voice, but didn’t leave the same impression on me as did Fax and Van Grinsven.

Turning to the production and creative side: The minimalist set was designed by Corey Lynn Howe (FB), with costumes by Michael Mullen (FB). Lighting was by Gregory Crafts (FB). My only quibble with the lighting is at times it was flashing between colors too much, which proved distracting. Calliope Weisman (FB), who we knew back in the days when she stage managed at REP East, was the stage manager. In Trousers was produced by Knot Free Productions.

In Trousers continues at the Lounge Theatre through November 3. Tickets are available through BrownPaperTickets; discount tickets may be available through Goldstar. There are some strong performance, and the story provides the missing piece for the Falsettos trilogy, but it is also a bit confusing.

October concludes with Mandy Gonzalez at the Soraya/VPAC (FB) and the MoTAS Poker Tournament.