Just like our first two Sunday shows themed, so did our last two. For them, the theme was “bitches”. In the first, Amanda the Barbarian, we meet a real bitch as she blurs the line between the theatre and the real world. In the second, we had more of a referential bitch, with a cabaret of Elton John songs, The Bitch is Back. But first, my obligatory explanation of the Hollywood Fringe Festival (FB):

* For those unfamiliar with  Hollywood Fringe Festival (FB), there are over 390 different shows occurring in the heart of Hollywood, with most along the stretch of Santa Monica Blvd from Western to W of LaBrea, and between Hollywood Blvd and Melrose. The shows run from 5 minutes to 2 hours, from one person shows to gigantic casts, from mimes to musicals. They have one — and only one — thing in common: they have to be able to load into a theatre in 15 minutes or less, and get out afterwards in the same time. You never know what you will see: it could be complete crap, it could be the start of a major new show. The shows and scheduling thereof are a nightmare to coordinate, but you could easily end up seeing four to five shows in a day. However, you can be guaranteed of a good time.

And now, on to our last two Sunday shows…. 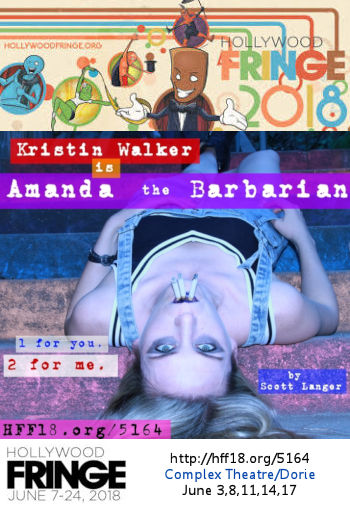 When I first did the scheduling of our Fringe shows, I made a mistake: I scheduled two shows at the same time as our tickets for Billy Porter at the Soraya. Luckily, I was able to reschedule both Fringe shows: one was They’ll Be Some Changes Made, which went to Thursday, June 7; the other was The Bitch is Back which went to Sunday 6/17 at 7:00 PM. But that left a large 3 hour hole in our schedule: we were in Hollywood, so could we find something in the general Lounge/3 Clubs/Broadmore/Complex area that was of interest. Reading through the Fringe catalog, we settled on Amanda the Barbarian, which had the following description:

Amanda, the star of a new play and superstar in her own head improvs, breaks the 4th wall, and drinks on stage in this play within a play. She is an animal – eating, loving, smoking, drinking, and stealing all the brightest lights and most beautiful moments that are all there to service her deep cavern of loneliness. A tornado on a high-speed train forcing her first time co-star Jack to play along, an over matched Director to give up, and her current girlfriend and co-star to be fed-up. Amanda The Barbarian is a love-letter to the theatre and to all the people we know who hijack every production.

From this, I expected some sort of odd train wreck: an actor who keeps getting progressively drunker on stage, going further off the rails. That wasn’t quite what I got. That’s not to say it was bad — far from it — just it wasn’t quite what we were expecting.

Amanda the Barbarian, by Scott Langer (FB), turned out to be the story of the production of a play starring the aforementioned Amanda, her live in boyfriend Jack, and her ex-girlfriend Marina, all under the direction of a director that Amanda hated. I’m not sure what the point of that play was, as we see it non-linearly, but the point of the play we were seeing on the Fringe stage was that Amanda was increasingly chafing at the written word. She didn’t like how the character was written, and kept changing the characterization and improvising, making life hell for her fellow actors. Further, this seemed to be bleeding into the real life relationships between the actors, who oddly had the same names as the characters in the on-stage play (this made it difficult to separate the play from “reality”, which might have been the authors point).

Given this, the play was fascinating to watch because you had no idea where it was going. By the end, I’m not sure where it ended up. Was there character growth? Did I feel more sympathetic for Amanda? Did she change? Or was she just a drunken bitch who just kept using people? Even now, almost 24 hours after the show, I’m still not sure.

My reception of the show wasn’t helped by some environmental factors, such as it being too cold in the theatre, or the fact that the scene changes took forever (and thus we were drowsing out). This play needs some serious tightening, both in execution between the scenes, and in the dialogue within the scenes.

As a boardgamer, I also winced everytime they mistreated that poor Monopoly set, but then again — hey, it’s Monopoly, not a real game.

I did think the performances were great. As Amanda, Kristin Walker (★FB, FB) captured the train wreck personality well. She was someone that drew your focus; she was  so fascinating as a character you just watched her to see what see would do next. Wonderful characterization. Also strong was Scott Langer (FB), the author, as her boyfriend. His portrayal of the exasperation of dealing with her was great (and to get drenched with what appeared to be beer, but could be Vernor’s, was a nightmare not only for him but whatever show had that stage next).

In smaller roles were Richard Reich (FB) as the exhausted director from dealing with the bitch that was Amanda, and for a few short  scenes, Frankie Jarvis as Marina. Both captured their characters well.

The production was directed not by “The Director”, but by the author, Scott Langer (FB). Costumes were by Frankie Jarvis. It was produced by Sean Frasier (FB), Kristin Walker (★FB, FB), and Mark Langer. 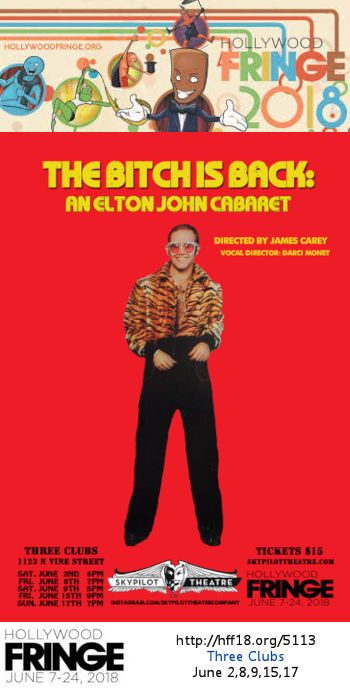 After Amanda, it was time to grab a quick dinner at the Taco Truck, and head over to The Three Clubs (FB) for our last show, The Bitch is Back: An Elton John Cabaret. At HFF17, we had a bad experience with Three Clubs: we hadn’t known that bar restrictions were in place, and we had someone under 18 with us. This time that wasn’t the case: we were both (well) over 18, and so I think this was the first time I have been in an actual bar (you don’t want me to drink — I talk more!). Now that we’ve been there, I know the drill for the future and we’ll probably try more shows there. One suggestion for the Hollywood Fringe Festival (FB), however: For shows such as this one, which are family friendly, you should endeavor to have them in family friendly facilities.

The Bitch is Back is a cabaret produced by Skypilot Theatre (FB), and is evidently a departure from their usual fare. No story. No premise. No characters. This is simply a celebration of Elton John (FB) music performed by members of the company: Chloejane Busick (★FB, FB), Erisa Evelyn Byrd (FB), Kelly Goodman (★FB, FB), Marie Pettit (FB), and TIna Walsch (FB). There are 15 songs performed. Alas, I didn’t have the presence of mind to note the playlist, but there was a good mix of well known hits, and a few obscure ones thrown in.

The cast of the show was clearly having the time of their lives with the music. Their fun was infectious, and most of the audience (especially those a bit more lubricated) were singing along. I’m not a singer, but during at least one number I brought up the Zippo lighter app on my phone. C’mon, you have to, for “Can You Feel The Love Tonight”.

I also appreciated that the cast was not your typical Hollywood model type, but reflected talent of all shapes and sizes. This is always welcome to see.

This, being Fringe, wasn’t a perfect show. A few notes here and there were off, but the audience was having so much fun I don’t think anyone really noted. As someone who grew up in the Elton John era (I still love the entire album of “Goodbye Yellow Brick Road”), it was just a hoot.

The production was directed by James Carey (FB), with vocal direction by Darci Monet (FB). Lighting and sound design was by The Three Clubs (FB). Kelsey Risher (FB) produced the show, and TIna Walsch (FB) did the program.

Alas, we caught the last performance of this show.

July will be a tad less busy. It starts with the 50th Anniversary of Gindling Hilltop Camp, followed by On Your Feet at the Hollywood Pantages (FB). For the next weekend, as Jane Eyre The Musical from Chromolume Theatre (FB) looks to be a dead parrot ⚰🐦., we’ve replaced it with Tabletop, a reading of a new musical about tabletop RPGs at the Charles Stewart Howard Playhouse (FB). The third weekend in July brings a Bat Mitzvah in Victorville, and Beauty and The Beast at 5 Star Theatricals (FB) that evening on Saturday, and a hold for the OperaWorks (FB) “Opera ReConstructed” at CSUN on Sunday. The last weekend may be a Muse/ique (FB) show. August starts with Waitress at the Hollywood Pantages (FB) on Saturday, and the Actors Co-Op Too! production of Always Andrews: A Musical Tribute to the Andrews Sisters on Sunday at Actors Co-op (FB). The next weekend brings the last Actors Co-Op Too! production, Twelfth Night, or What You Will at Actors Co-op (FB). There may also be a production of The Most Happy Fella at MTW — I’m not sure about it, but the hold date is on the calendar.