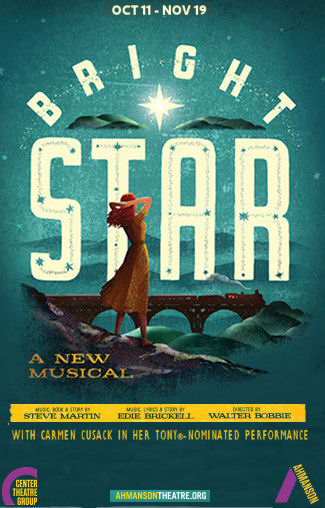 I have a wide ranging taste in music (as anyone who has listened to the 41,583 songs on my iPod on shuffle knows), but one of my longest lasting musical loves has been folk music, which branches very quickly into its kissing-cousins: Bluegrass and Celtic. So when I learned that Steve Martin (FB) — of King Tut fame — was not only an accomplished Bluegrass musician but was working on a musical with Edie Brickell (FB) — another accomplished musician — I was intrigued. I got the cast album of the musical (Bright Star), and fell in love with the music. So I was very pleased when a tour was announced, and the show became part of the Ahmanson Theatre (FB) season. We saw it last night, and even through a headache, we fell in love with the show.

The story of Bright Star is a hard one to describe, especially because going into too much detail might derail the second act. Suffice it to say that the story explores the interconnection between two families in North Carolina: the Murphy family and the Cane Family. It focuses on two relationships. The first is the relationship between Alice Murphy, the daughter of a local preacher, and Jimmy Ray Dobbs, the son of the Mayor. The second is the relationship between Billy Cane, who has just returned from WWII, and Margo Crawford, who has been waiting for him. The time frame varies from the time of Billy’s return and shortly thereafter, to times in the past when Alice was Billy’s age.

I had had an inkling of the story from the cast album before going in, but I still found it wonderfully touching. The pacing of it unfolded well, giving us time to get to know the characters and their motivations, which made what happened in the second act much more effective.

The music of the show is squarely in the bluegrass and folk realm, with twinges of country and gospel. It is a genre that is underrepresented on Broadway — the only other musicals with scores of this style are The Robber Bridegroom and Golden Boy of the Blue Ridge. I loved it, and I strongly recommend listening to it. We were lucky enough to have the key voice on the album, Carmen Cusack (FB), playing the same role in Los Angeles.

The staging of the show, as conceived by director Walter Bobbie (FB) and choreographer Josh Rhodes (FB), was beautiful. The band was primarily in a wooden house on the stage that the characters kept moving around and turning around. The ensemble remained in fluid motion around and behind the characters, transforming scenes as needed. I found it magical and charming (but then, I liked Amalie as well for similar reasons). This was one of those shows with what I would call a representative set — small stage pieces that represent a place — as opposed to some of the hyper-realistic sets you might see in another show. It worked, and it worked well.

The casting was spectacular. As noted before, the lead character of Alice Murphy was played by the originator of the role, Carmen Cusack (FB). It was no surprise, therefore, that the role fit her like a glove, and she was able to be playful and quirky and to truly inhabit the character. She also had a wonderful voice for the part. As I’m typing this up, I’m listening to the album she recorded at 54 Below, and it is just a marvelous voice.

Playing opposite her as her love interest Jimmy Ray Dobbs was Patrick Cummings (FB). Cummings had great chemistry with Cusack, especially in the scene where we see the relationship between the two while he is working on the icebox. Not a great surprise – he had also been with the cast for a while and was the understudy for Jimmy Ray on Broadway. He also had a wonderful voice for bluegrass.

Leading the other key relationship as Billy Cane was A. J. Shively (FB), who was also in the Broadway cast in that role. Lovely singing voice, great playfulness and earnestness. I particularly liked him in the “Another Round” number and in his interactions in both the bookstore and at the literary publisher.

Billy’s love interest, Margo Crawford, was played by Maddie Shea Baldwin (FB). Her role was smaller, but she shone in it, providing a lovely light and lightness in her scenes. She had a lovely singing voice.

In terms of recognizable supporting characters, there were two primary sets. The first set were what were essentially comic relief characters in Ashford at the publishing company: Daryl Ames [Jeff Blumenkrantz (FB)] and Lucy Grant [Kaitlyn Davidson (FB)]. Both played their roles perfectly. Blumenkrantz is a master of comedy; this was demonstrated the last time we saw him in Murder for Two.  He captured the sardonic nature of his character quite well. Davidson was a good foil: good looks, good delivery, wonderful movement, and great expressions. Both were just fun to watch.

The other set of supporting characters were the parents of the leads: Stephen Lee Anderson as Daddy Murphy; Allison Briner-Dardenne (FB) as Mama Murphy; David Atkinson (FB) as Daddy Cane; and Jeff Austin (FB) as Mayor Josiah Dobbs. All brought the requisite characterization and authority to their roles; many had played them on Broadway. Anderson, Briner-Dardenne, and Austin had particular nice voices for this music. I’ll note we’ve seen Atkinson many times before, being subscribers to  Actors Co-op (FB).

The drought has ended, and the last three months of 2017 are busy busy busy. A little later today, I’m going to see a thriller penned by the fellow through whom we get our Saroya (VPAC) subscriptions, Schaeffer Nelson (FB) — Mice at the Ensemble Studio Theatre LA (FB) in Atwater Village. The weekend before Halloween brings This Land at Company of Angels (FB) in Boyle Heights

Looking into November, we start with the Nottingham Festival (FB) in Simi Valley, followed by The Man Who Came to Dinner at Actors Co-op (FB). The following weekend brings a Day Out with Thomas at Orange Empire Railway Museum (FB), as well as The Kingston Trio (FB) at the Kavli Theatre in Thousand Oaks (FB). The third weekend will bring Edges at the CSUN Theatre Department (FB) on Friday, the Tumbleweed Festival (FB) on Saturday, and Spamilton at the Kirk Douglas Theatre (FB) on Sunday. Thanksgiving Weekend will bring Something Rotten at the Ahmanson Theatre (FB) and hopefully Levi (a new Sherman Brothers musical – join the Indiegogo here) at LA Community College Camino Theatre (FB). November concludes with the Anat Cohen Tentet at the Saroya (the venue formerly known as the Valley Performing Arts Center (VPAC)) (FB).