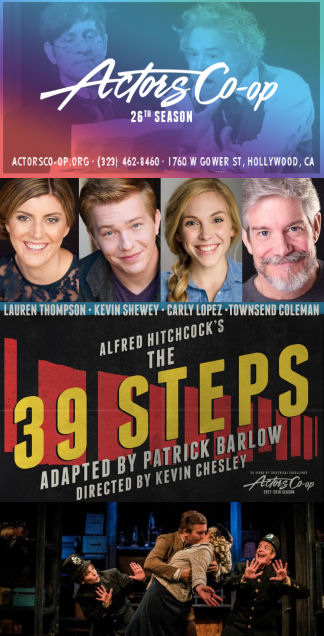 And so, with Alfred Hitchcock, our theatre hiatus of almost 6 weeks comes to an end. Between Hamilton, which we saw on August 12 and this production of The 39 Steps, saw us traveling over 4,800 miles (at little over 4,905,290 steps, at the average stride rate).  The break, due to a combination of vacation and other activities, was a palette cleanser. And we’re ready to slowly start back up theatre, and our first show was the first show of the 26th season of Actors Co-Op (FB): Alfred Hitchcock’s The 39 Steps, adapted by Patrick Barlow.

We last saw The 39 Steps at the Ahmanson Theatre (FB) in May of 2010. Back then, I wrote about the production: “This is one production I expect to have a long life after the initial tour: it can easily be done by inventive companies.” The show has: I’ve begun to see regional companies doing the show on a regular basis — I think there are two or three doing it in Southern California alone.

The original “39 Steps” was a 1935 British thriller film directed by Alfred Hitchcock. The short version of the plot of that film, from IMDB, is “Richard Hannay is a Canadian visitor to London. At the end of “Mr Memory”‘s show in a music hall, he meets Annabella Smith who is running away from secret agents. He accepts to hide her in his flat, but in the night she is murdered. Fearing he could be accused on the girl’s murder, Hannay goes on the run to break the spy ring.”. You can find a more detailed summary of the film plot on Wikipedia.

This stage version of “The 39 Steps” is a comic farce interpretion of the movie. It takes the original mystery film, and puts the exact story onstage as if it was done by a group of four British actors at a cheap theatre. One actor takes the Richard Hannay role; one actress takes the three female lead roles (Annabella Schmidt, Pamela, and Margaret)… and the other two men take all of the remaining over 150 roles from the film. Along the way, they throw in every Hitchcock cliche and reference you can think of, including names of every Hitchcock films and most of Hitchcock’s well known situations (such as the shower scene from Psycho and the airplane chase from North by Northwest). They even throw in a Hitchcock cameo!

Making this even more fun is the fact that they don’t do this in the sort of expensive production you’ve come to expect from Broadway these days. They do it on the cheap, using clever invention (such as rear projection, puppets, representational props) to make up for the all-too-common overdone show.

The Actors Co-Op version of the show hewed close to the above, although they slightly altered the framing device and changed the execution as appropriate for an intimate theatre.This production framed the show not as British actors in a cheap theatre, but filming a production in the 1930s. I don’t recall any significant use of rear projection or seeing any puppets (and do not recall any shower scene or Hitchcock cameo). But other than that, the inventiveness was still present — including a great running gag with a window. They used props extensively to create the scene and the place, and it worked very well. They also changed the makeup of the clowns from two men to a man and a woman, which actually added a bit to the humor. They even brought in the Maltese Falcon.

Not being familiar with the script, I can’t say how much of the invention is dictated by directions in the script (stemming from the original production), and how much comes from the director (in this case, Kevin Chesley (FB)). If I had to hazard a guess, I’d estimate about 60/40, with the story giving the basic manic structure and suggesting broad execution approaches, and the director filling in the specifics and adding additional references and tricks as they saw fit. Assuming that is the case, then Chesley did well with this. Not only was he able to capture the farce timing required for this show, and not only did he pull all of the distinctly different characters out of the actors, but he was able to adapt the story from a well-funded production on a proscenium stage to an intimate theatre (under 99 seats) production in the three-quarter round, using no rear projections and a basic set of props.

The actors also captured the farce nature of the show well. In the lead position was Kevin Shewey (FB) as Richard Hannay. He was the straightman to the farce, the person moving the plot forward while being the center and catalyst for the comedy. He did this well, maintaining his composure in the madness. His regular ingenue was Lauren Thompson (FB), who played the main named female roles: Annabella, Margaret, Pamela, and the Radio Announcer. Demonstrating a variety of accents and personalities, Thompson was fun to watch. Both had to perform quite a bit of physical comedy, which came off well.

Supporting them were the two clowns, Townsend Coleman (FB) and Carly Lopez (FB), who covered the remaining 10,000 characters and roles. Well, probably less than 10,000, but it was a lot.  All of these characters — different sexes, different dialects — required lots of physical comedy and quick costume changes, which were executed well. It was fun to watch.

The 39 Steps continues at Actors Co-op (FB) through October 29th, 2017. Tickets are available by calling Actors Co-op, or through their website. Discount tickets may be available through Goldstar. The production is clever and extremely funny, and well worth seeing.

Note: There was one non-production related discordant note. We’re Jewish. Actors Co-op (FB) is a ministry of First Presbyterian Church in Hollywood [FPCH] (FB), which is noted in every program in their mission statement. We have no problem with that — we’ve attended productions from other church ministry theatre groups such as ELATE, and we’ve never noticed any overt proselytizing — only excellent theatre. That’s why we subscribe and recommend this company to others — excellent theatre. However, as we were leaving the show, we noticed a sign on the side of their fellowship hall from FPCH indicating their ministries, which included Jews for Jesus. JFJ and similar groups (the so-called “Messianic Jews”) are problematic for Jews, as they have, as part of their mission, conversion of Jews to Christianity, and they often use misleading tactics to do so. That FPCH supports them does make clear their Christian nature; still, seeing that sign gave this Jewish audience member pause. It will likely be rotated out by the next time we’re on campus, but the company might consider discussing with FPCH the impact of publicizing such ministries on the broader theatre audience attending their shows.

Dining Notes: Normally we hit the local Fresh Brothers Pizza (FB). They are near the theatre, have great gluten-free options, and most importantly, their own parking. Last night, however, we wanted something different as I’m trying to reduce my cheese consumption. Our choice was Localli (FB), which is about 1 block further east than Fresh Bros (on the E side of Gelsons). They also have their own parking lot. It is a combination health-food market and sandwich shop, with some excellent and tasty sandwiches and salads — healthy, and available gluten-free and vegan. It isn’t fancy. Still, I think we’ll be back. There’s also a Thai Restaurant — Pimai It’s Thai (FB) — in the same parking lot that we might try next time.

September is very quiet for theatre — The 39 Steps is our only show. I’ve been looking at the shows coming across Goldstar, and there’s not much that is drawing me to them. So we’ll see about how the upcoming weekends fill out. Currently, our October theatre begins mid-Month with  Joseph and the Amazing Technicolor Dreamcoat at Cabrillo Music Theatre (FB), the Upright Citizens Brigade (UCB) at the Valley Performing Arts Center (FB), and a tribute to Ray Charles — To Ray With Love — also at the Valley Performing Arts Center (FB). The third weekend in October brings Bright Star at the Ahmanson Theatre (FB). Looking into November, we have The Man Who Came to Dinner at Actors Co-op (FB), the Nottingham (FB) and Tumbleweed (FB) Festivals, a Day Out with Thomas at Orange Empire Railway Museum (FB), Spamilton at the Kirk Douglas Theatre (FB) and Something Rotten at the Ahmanson Theatre (FB). December brings ACSAC 2017 in San Juan PR, the Colburn Orchestra and the Klezmatics at the Valley Performing Arts Center (FB),   Pacific Overtures at Chromolume Theatre (FB), and our Christmas Day movie. More as the schedule fleshes out, of course, but we’re booking all the way out in mid to late 2018 already!