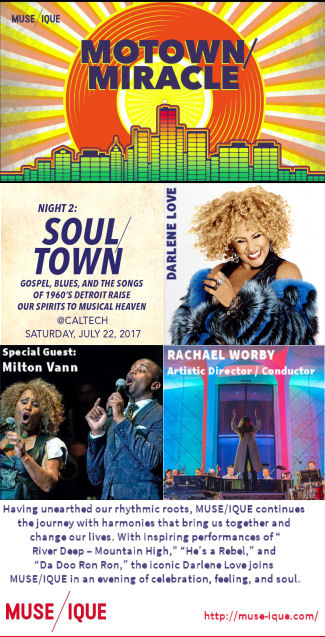 We don’t always see theatre. Sometimes, we see concerts. Some of our favorites are the ones produced by Muse/ique (FB), a “counter-culture” orchestra out of Pasadena under the artistic direction of Rachael Worby (FB). Each year they pick a theme — in 2014 it was Break/Through about breakthrough performance; in 2015 it was Bernstein; last year it was Gershwin. They then explore the theme from all sorts of angles. This year the theme was Motown/Miracle, and the exploration was of the soul, of soul music (and particularly the Motown / girl group style), of the soul of the artist. The special guest performer was Darlene Love (FB), a significant Los Angeles background presence on many of the soul music hits (not always credited to her). I was actually familiar with Love from the cast album of her 1985 Broadway show, Leader of the Pack. The evening was not just a celebration of the soul music style — as produced from the recording centers in Los Angeles, New York, and the true Motown, Detroit; it was a celebration of the power in the backup singers and artists backing the promoted names. Also supporting Love on a number of songs was Milton Vann (FB), together with the background trio of Melodye Perry (FB), Vee Nelson (FB), and Kenna Ramsey (FB).

As is common with the shows, by the end, the audience was dancing in the aisles (well, on the side of the lawn). This was one of the best Muse/ique performances that we have seen: great music, a lovely evening.

I do, however, have my usual complaint. There was no program. In particular, we didn’t get a list of the orchestra and backup singers, let alone the production team. I have requested this information from Muse/ique; they updated the show page to provide most of it. In particular, that page lists all the composers and orchestrators (although it does not match them to the pieces performed)

There were no production credits provided.

In the 2017 “Summer of Sound”, there is one more production: Glow/Town, on August 26,  featuring Savion Glover (FB) and, from the Hamilton tour, Joshua Henry (FB). Tickets are available from the Muse/ique website; discount tickets may be available from Goldstar. I find the Festival Seating just fine: general admission tables and chairs to see the show, and you bring your own picnic to enjoy. A perfect summer evening. Summer events take on the lawn in front of the Beckmann Auditorium at CalTech in Pasadena.

The last weekend of July brings The Last 5 Years at Actors Co-op (FB). August starts with Brian Setzer at the Hollywood Bowl (FB) on August 2, followed by The Curious Incident of the Dog in the Night at the Ahmanson Theatre (FB) on the weekend. We are also squeezing in On The Twentieth Century at the Pan-Andreas Theatre in Hollywood from Proof Doubt Closer (FB), as a friend is in the cast (you can contribute to the production here). The second weekend of August? What made sitting through The Bodyguard worth it: Hamilton at the Hollywood Pantages (FB).

I’m still scheduling September, but so far we have The 39 Steps° at Actors Co-op (FB) and Pacific Overtures at Chromolume Theatre (FB). There’s also the Men of TAS Golf Tournament, if any theatre company reading this wants to donate tickets to our silent auction (hint, hint). October is also filling up quickly, with Joseph and the Amazing Technicolor Dreamcoat at Cabrillo Music Theatre (FB), the Upright Citizens Brigade (UCB) at the Valley Performing Arts Center (FB), a tribute to Ray Charles — To Ray With Love — also at the Valley Performing Arts Center (FB), and a hold for Bright Star at the Ahmanson Theatre (FB). Lastly, looking into November, we have The Man Who Came to Dinner at Actors Co-op (FB), the Nottingham (FB) and Tumbleweed (FB) Festivals, a Day Out with Thomas at Orange Empire Railway Museum (FB), and HOLDs for Spamilton at the Kirk Douglas Theatre (FB) and Something Rotten at the Ahmanson Theatre (FB). More as the schedule fleshes out, of course, but we’re booking all the way out in mid to late 2018 already!