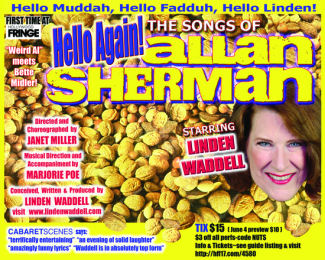 Our penultimate day at the 2017 Hollywood Fringe Festival (FB) started with our last three musicals, ranging from parodies of old (Hello Again, The Songs of Allan Sherman) to parodies of new (Slightly Off Broadway) to  a walking talking parody elected to office (Trump in Space). All in all, it was a great start to the day.

Our first Fringe show of the day was Hello Again, The Songs of Allan Sherman. This is a show we’ve seen — nay, produced — before. We had the lead, Linden Waddell (FB), perform her one woman show as a fundraiser for our synagogue auxiliaries back in October. It was a great show then, and she brought it back for the Fringe (where it won a Fringe Encore award tonight!).

The Fringe version of the show was a cut-down version of our synagogue’s show (see, you should have come), given the limitations of Fringe. Still, a large number of songs were covered: There is Nothing Like a Lox; Green Stamps; Academy Award Medly: Call Me / Secret Code / Chopped Liver / Overweight People; Shticks Medly; Sir Greenbaum’s Madrigal; Your Mother’s Here to Stay; Skin; One Hippopotami; Night and Day (with punctuation marks included); Harvey and Sheila; Smog Gets In Your Eyes; All of My Laughter (from The Fig Leaves are Falling); Shake Hands with your Uncle Max; and Hello Muddah, Hello Faddah.

Listening to the crowd, there was a mix of young and old, and you could tell who was where by who laughed at what. What this meant was that for many, the show was an introduction to an artist they had never heard before (sigh – this is what happens when Dr. D goes off the public airwaves — oh, mighty MET, where have you gone). The laughter was raucous, and the show was well received.  This is a show that young and old will enjoy, although you might have to explain some of the references to the younger folk.

Linden was accompanied during the show by accompanist Marjorie Poe, who joins in on a few songs.  The show was directed by Janet Miller (FB). Stacey Abrams was the stage manager. PS: Linden is booked by Jeannine Frank / Frank Entertainment.

As the show won a Fringe Encore Award, there will be more performances in July and possibly August. Check the show’s Fringe Page for more information. You can also check out Linden’s page for the show, which gives upcoming appearances. 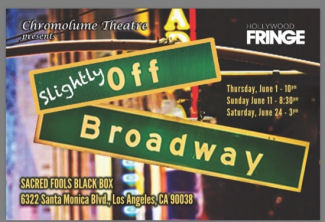 The second Fringe musical of the day was from a theatre company we know and are growing to love — and, full disclosure, a company where we are subscribers: Chromolume Theatre (FB). Their Fringe entry this year was Slightly Off Broadway, a collection of 20 parady songs with music drawn from the catalog of Broadway and Movie musicals, and lyrics written by Bonnie Joy Sludikoff (FB), who also served as director.

As I was having too much fun during the show to scribble down all the parody songs, I’ll lift the list from another review: «“On My Phone” (to the music from Les Miserables) to “A Whole New Girl” (Aladdin) about dating on Tinder to “Something That’s Mean” (Little Shop of Horrors) about FaceBook revenge (to a) ticking biological clock “Maybe” (Annie), the high cost of visiting Disneyland “The Fast Pass Line” (The Lion King), obsessions with Lin Manuel Miranda “So Stoked” (Mary Poppins) and TV’s Law and Order SVU “Officer Benson” (West Side Story)…. Even the Fringe Festival itself gets “What I Did for Fringe” (A Chorus Line).»

The quote should give you an idea of the range of parody in the show. There was even a great Trump parody song, based on a song from Shrek. Seems appropriate, but who could ever fall in love with an Ogre?

Overall, I found the songs very cute and entertaining, and fun to listen to. The time of the show flew by far too fast. For someone — like me — who knows cast albums well — it was a joy. It was also the level of entertainment we’ve come to expect from Chromolume.

The songs were performed by Kelvin Ralph Chou (FB), Rita Outtrim (FB★, FB), Ken Maurice Purnell (FB) [who we saw in Zanna Don’t], Eleen Hsu-Wendlandt (FB), and the author, Bonnie Joy Sludikoff (FB). All were great to listen to and had wonderful voices, and seemed to create characters as necessary to fit the songs. Paul Cady (FB) was the musical director and accompanist. Rebecca Schoenberg was the stage manager.

Alas, we saw the last performance of Slightly Off Broadway, as it didn’t win an Encore award. You can, however, catch Chromolume Theatre (FB)’s next production: Pacific Overtures. 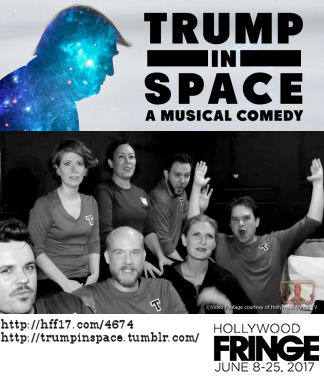 Our final musical of Fringe was another commentary show on the election of Trump: Trump in Space. The basic premise of the show is simple: It is 400 years in the future. The policies of the Trump administration resulted in the Earth blowing itself to smithereens, and humanity is now on starships searching for a new home: Polaris IV. The captain of one of these ships, the USC (United States of Commerce, “Opportunity at all costs!”) Arizona is Capt. Natasha Trump, the great great great … great granddaughter of the Donald. She has been sent to capture and destroy the captain of the USS California (a ship of the resistance) — Capt. Gary Hart. Trump’s crew consists of Cmdr. Sessions, Lt. Cmdr Palin, and Lt. Josh Christie. Hart’s crew includes Carter and BoyGirl Clinton. I should note that the Trump side is lead by a shadowy Executive, of whom all you can see is orange hair.

The premise itself was clever: a mashup of political commentary and Star Trek, down to the style of the uniforms. The character names and mannerisms were a bit heavy handed, but this was an improv team at work so that wasn’t a surprise. The execution was funny, with a number of repeated bits (such as the elevator) that were hilarious. There was a strong improv element to the show. At our show, for example, it looked like two songs were just tossed in a very hilarious fashion. All of the acting team were trained improv specialists, so this worked well. In short, it was enjoyable and funny; however, it wasn’t “high art” and doesn’t have the potential — at least in its current form — of becoming a broader longer-lasting political commentary musical such as Bush is Bad or Clinton the Musical. For that to happen, I think a little greater focus and direction is required.

For the most part, the acting team was strong: Gillian Bellinger (FB) was an extremely cute and strong Captain Trump, and Scott Palmason (FB)’s Gary Hart worked well in his interactions with her. Supporting Bellinger was the Trump team: Jim Shipley (FB) as Palin, Kevin Richards [Gardner] (FB) as Sessions, and Landon Kirksey (FB) as Lt. Josh. They fit their characters well, played to the fun, and as such, were fun to watch. Supporting Palmason’s Hart was the crew of the California: Nikki Bittogrino (FB) as Carter and Muriel Montgomery (FB) as BoyGirl Clinton. Watch these two during the jail scenes — they are just a hoot. All of these folks sang reasonable well, and were just great at the improv.

Rounding out the performers were either Carrie Long (FB) or Rachel Boller (FB) as the Executive (I’m not sure which one was at our show, but the one that was had a lot of vocal trouble on her last song), and Don Schlossman (FB) as the voice of the Executive.

The show featured book and lyrics by Gillian Bellinger (FB) and Landon Kirksey (FB), and music by Tony Gonzalez (FB) and Sam Johnides (FB). Gonzalez served as music director and provided the on-stage music. I’d like to say that the songs were memorable, but none stuck in my memory. That could just be Fringe overload.

The production was directed by Matt Zettell, assisted by C.J. Leavens (FB). Annabeth Rickley (FB) was the choreographer. Sarah Emily Rish (FB) was the stage manager.

Alas, Fringe is over, and so I would normally say that you missed your chance to see this show. However, the show was the recipient of an Encore award, and so will live again during July and August. Check the show’s Fringe page for information on dates and tickets.

Ob. Disclaimer: I am not a trained theatre (or music) critic; I am, however, a regular theatre and music audience member. I’ve been attending live theatre and concerts in Los Angeles since 1972; I’ve been writing up my thoughts on theatre (and the shows I see) since 2004. I do not have theatre training (I’m a computer security specialist), but have learned a lot about theatre over my many years of attending theatre and talking to talented professionals. I pay for all my tickets unless otherwise noted. I am not compensated by anyone for doing these writeups in any way, shape, or form. I currently subscribe at Cabrillo Music Theatre (FB), the Hollywood Pantages (FB), Actors Co-op (FB), the Chromolume Theatre (FB) in the West Adams district, and a mini-subscription at the Valley Performing Arts Center (VPAC) (FB). Through my theatre attendance I have made friends with cast, crew, and producers, but I do strive to not let those relationships color my writing (with one exception: when writing up children’s production, I focus on the positive — one gains nothing except bad karma by raking a child over the coals).  I believe in telling you about the shows I see to help you form your opinion; it is up to you to determine the weight you give my writeups.

July brings us back to normal theatre (° = pending confirmation). We start with The Voysey Inheritance at Actors Co-op (FB) the first weekend. The second weekend is currently open, but we’re thinking about Animal Farm at Theatricum Botanicum (FB). The third weekend brings Peter Pan at Cabrillo Music Theatre (FB) and Ruthie and Me at  Actors Co-op (FB). The fourth weekend of July brings Motown/Miracle | Harlem/Renaissance from Muse/ique (FB). The last weekend of July brings The Last 5 Years at Actors Co-op (FB).  August will (hopefully) start with Brian Setzer° at the Hollywood Bowl (FB) on August 2, followed by The Curious Incident of the Dog in the Night at the Ahmanson Theatre (FB) on the weekend. We may also squeeze in On The Twentieth Century at the Pan-Andreas Theatre in Hollywood from Proof Doubt Closer (FB), as a friend is in the cast. The second weekend of August? What made sitting through The Bodyguard worth it: Hamilton at the Hollywood Pantages (FB). I’m still scheduling September, but so far we have The 39 Steps° at Actors Co-op (FB) and Pacific Overtures at Chromolume Theatre (FB). There’s also the Men of TAS Golf Tournament, if any theatre company reading this wants to donate tickets to our silent auction (hint, hint). More as the schedule fleshes out, of course, but we’re booking all the way out in mid to late 2018 already!