Yesterday, we went to the 4th edition of the Nottingham Festival (FB) (having supported the original Kickstarter back in 2013). This year’s festival (November 5/6 12/13) comes directly after the Simi Valley Historical Ghost Tour, (produced only by Actors Rep of Simi Valley (FB), not Nottingham) which came after the 1st Annual Tumbleweed Festival on October 22/23 and used the same location. This allowed the organizers (Actors Rep of Simi Valley (FB) and the Simi Valley Cultural Association (FB)) to rent the same space for four weekends in a row. As before, the event was held near the Simi Civic Center. Like last year, they used Civic Center Park in Simi Valley, which is the space between the Courthouse and the Simi Valley City Hall, as opposed to being in Rancho Tapo Community Park (note: the map below is mislabeled — the purple is the 2013-2014 location; the orange the 2015-2016 location): 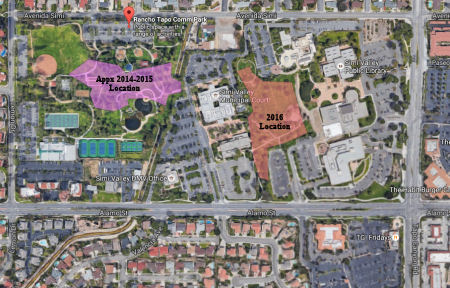 They seem to have the entry aspect under control: there were no lines. Whether that is due to lower attendance, I don’t know. I do know that it was a simple “collect your ticket”; there were no security inspections upon entry. Had we known, we might have brought drinks. I think this Faire is small enough that the concern isn’t all that great — there were uniformed (although not period uniform — that would be neat!) police officers wandering around.

For some reason, I didn’t like this year’s arrangement as much as the last two year’s (2015, 2014) (although it is certainly better than 2013‘s). [Evidently, 2015 was in the same location, but I recall the layout being very different] The stages seemed harder to find, parking seemed tighter, the Master’s Pavilion (normally a star attraction) seemed tucked away as an afterthought behind some stores. The kids stuff seemed hidden, and there was less play space. It wasn’t a disaster, but I’m not sure the economy of the using the same space and layout as Tumbleweed helped overall (although it did save the sponsors a lot of effort). The new layout, however, did provide some picnic tables. I’m hoping this is like the situation in 2013 — they will workout the flow kinks for the combination, and next year will have a better flow.

Food vendors seemed a little bit lighter than in past years. What was there was excellent and not overpriced, so who am I to complain? I certainly enjoyed what I had for lunch, and wanted to try more but didn’t have the room. There was still a dearth of beverage options for those avoiding sweet beverages — I still maintain that having a “water fill” station for a reasonable price ($1-$2) would allow people to fill their mugs and goblets, and use a lot less plastic and other waste. There were also precious few gluten-free options for my wife — the turkey legs and the Topanga Jerky were about it.

Entertainment options were good from what we saw; as always, more music is welcome. The program was lacking — the map was really rough, and there was not a list of all vendors (which would be very useful).

The crowd seemed reasonable for a small festival — I hope it was worthwhile for the vendors. There was a really good selection of vendors — I believe a few more than last year. They have added at least one pottery vendor, and there are a few more clothing vendors. They still, however, are missing a stave / wand vendor (which is a big surprise, as they had a stave vendor at Tumbleweed). Here’s hoping for more continued growth.

[Edited with a correction on the location from Nottingham’s director of communication.]